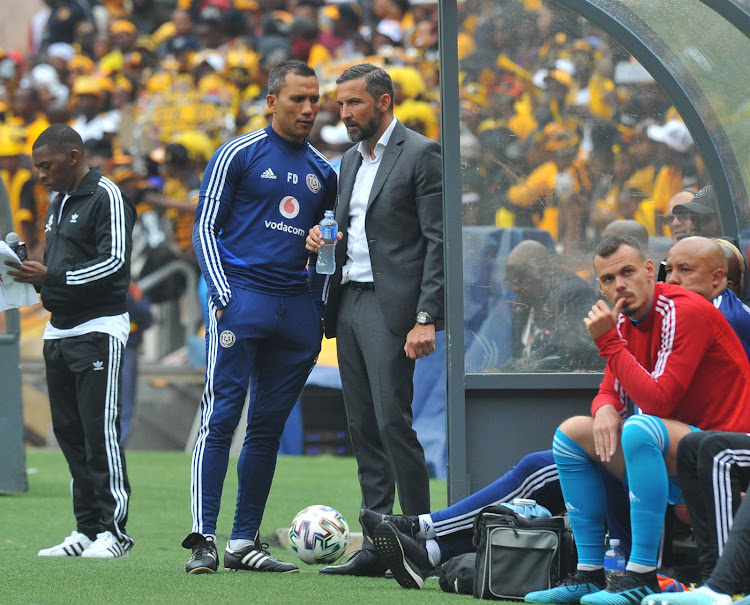 It is not clear if Josef Zinbauer will be in South Africa well in time for the Soweto derby second leg MTN8 semifinal match against arch rivals Kaizer Chiefs on Sunday November 8 2020.
Image: Sydney Mahlangu/BackpagePix

Zinnbauer departed hastily from OR Tambo International Airport on Saturday evening for Germany‚ because his son‚ Fabio is in a coma in hospital following a horror car accident in Nuremburg on October 23.

Initially all Pirates would reveal was that the coach's son was in hospital.

A report in on the website of German newspaper Bild on Tuesday revealed Fabio Zinnbauer had been in a car accident and was in a coma.

Given that news‚ understandably it does not seem the coach will return soon.

Mbele confirmed on Tuesday that Davids will take charge against Celtic‚ but would not answer whether there is any indication beyond that‚ or even to Sunday's semi-final second leg against Chiefs at FNB Stadium.

"Fadlu will be in charge [on Wednesday] against Celtic‚" was all the Bucs official would say.

"The 24-year-old Skoda driver is in mortal danger‚" the Bild report stated.

Thembinkosi Lorch had a "top game"‚ said Orlando Pirates coach Josef Zinnbauer after the forward got a first start of the season and was ...
Sport
1 year ago

‘He will be back soon’: Orlando Pirates reveal why coach Zinnbauer left for Germany

Orlando Pirates have revealed that coach Josef Zinnbauer has had to hastily leave to go home to Germany because his son is in hospital.
Sport
1 year ago