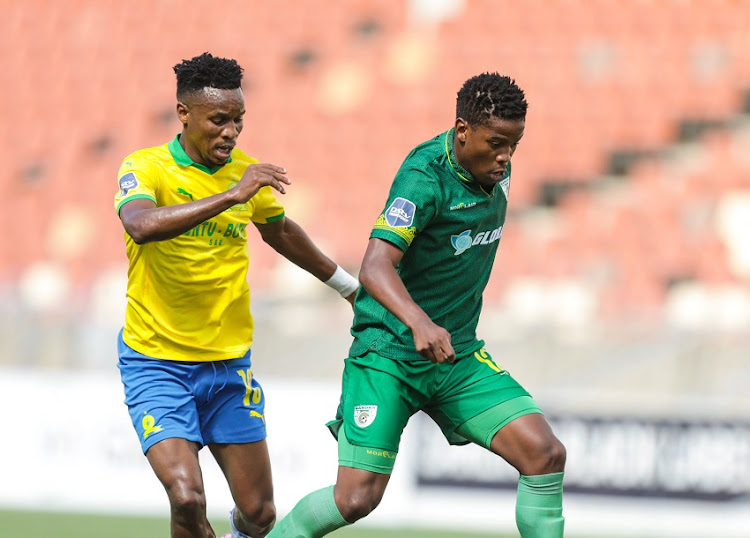 Mamelodi Sundowns are strolling towards ending the first round of the DStv Premiership on top of the log and unbeaten after they did just enough to defeat Baroka FC 2-0 to register their seventh victory of the season in Polokwane on Saturday.

Baroka finished the match with 10 men after Denwin Farmer fouled Peter Shalulile just outside the area a few minutes before Zwane wrapped up the game with his eight goal of the season to draw level again with SuperSport United’s Bradley Grobler at the top of the scorer's list.

The defending champions took their points tally to 24‚ meaning they’ve only dropped six points from a possible 30 with five matches left before they complete the first round.

The victory also keeps the Brazilians on course to do what has never been done by any club in the Premier Soccer League era – winning the championship in four successive seasons.

Only Sundowns (1997 to 2000 and 2017 to 2020) and SuperSport United (2007 to 2010) have won the Premiership three times in a row. The way the Brazilians have started the current campaign under the leadership of Manqoba Mngqithi and Rulani Mokwena‚ who replaced Pitso Mosimane‚ bodes well for them breaking another extraordinary record in SA football.

There was a lot of huffing and puffing in the scorching sun of Limpopo in the goalless first stanza in which only Peter Shalulile came close to giving the visitors the lead in the 14th and 45th minutes when his headers ricocheted off the bar with Oscarine Masuluke in the Baroka goal well beaten.

With Sundowns bossing possession and giving the home team little time and space on the ball counterattacking was the only option for Baroka and they did trouble their opponents on a few occasions when their moves somehow came together.

Sundowns continued where they left off in the second half‚ bombarding the Baroka area with as many attacks only for Masuluke to keep them at bay with some outstanding saves before the lanky gloveman was beaten by Lakay’s exquisite low free-kick from just outside the area.

South African giants Mamelodi Sundowns and Kaizer Chiefs avoided meeting each other or Pitso Mosimane’s Al Ahly in the group stages of the 2020-21 ...
Sport
1 year ago

Masuluke had also denied Mothobi Mvala his second goal of the season tipping over his thumping header from Rivaldo Coetzee’s well-floated corner kick a few minutes before Lakay broke the deadlock.

After winning this match Sundowns will eagerly await the result of Sunday’s Soweto derby between Swallows and Orlando Pirates – a team they beat 1-0 last weekend.

A draw or a loss for Swallows will suit the Brazilians just fine ahead of meeting their Tshwane rivals SuperSport on Saturday.