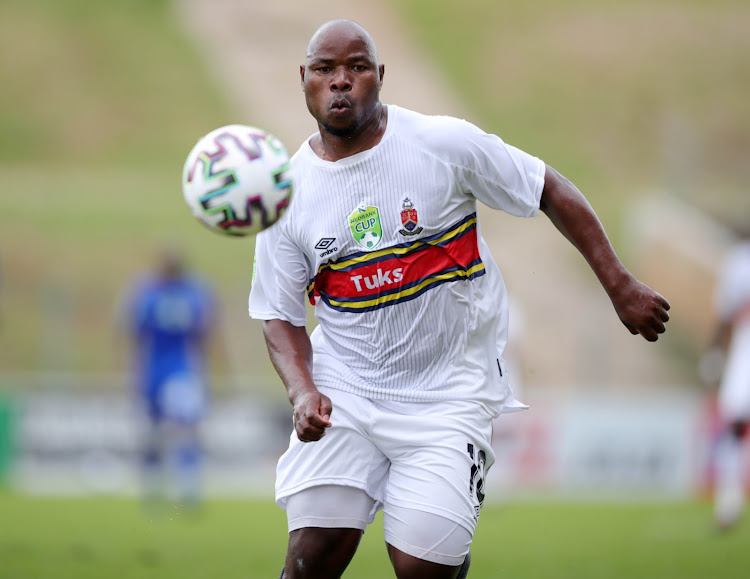 Collins Mbesuma in action for University of Pretoria during the Nedbank Cup last-32 match against JDR Stars at Giant Stadium in Soshanguve on February 6 2021.
Image: Samuel Shivambu/BackpagePix

Former Kaizer Chiefs star Collins “Ntofo-Ntofo” Mbesuma has challenged today's strikers to break his record of 25 strikes in a season.

Mbesuma‚ who also played for English side Portsmouth‚ Mamelodi Sundowns‚ Orlando Pirates and Moroka Swallows among a host of others‚ scored 25 league goals and 35 in all competitions during the memorable 2004-2005 season at Chiefs that saw the Naturena side win the league title.

His record still stands after 16 years.

Veteran Siyabonga Nomvethe was the last player to come close to breaking the record when he scored 20 goals for Swallows during the 2011-2012 season.

Since then‚ no player has scored more than 16 league goals in a season‚ but there is hope that this could change with Bradley Grobler of SuperSport United and Ruzaigh Gamildien of Swallows.

“Goal scoring in the PSL this season is much better‚” said Mbesuma‚ who is playing for University of Pretoria in the GladAfrica Championship. “It is good to see strikers scoring goals and giving each other good competition. I am interested to see who will be the top goal scorer at the end of the season and how many goals they are going to score.”

Grobler is now the leading scorer with 13 goals from 19 appearances and he is closely followed by Gamildien who has banged in 10 from 16 outings.

Former #KaizerChiefs, #MamelodiSundowns and #OrlandoPirates striker Collins "Ntofo-Ntofo" Mbesuma reflects on his successful career. He talks about the 2004-2005 season where he smashed a record 25 PSL goals to help Chiefs to the league title.

There is also Cape Town City’s Mduduzi Mdantsane‚ and then Themba Zwane and Peter Shalulile of Mamelodi Sundowns‚ who have scored nine‚ eight and seven goals respectively but are outsiders for the Golden Boot.

“Guys like Bradley Grobler‚ Ruzaigh Gamildien‚ Mduduzi Mdantsane‚ Themba Zwane and Peter Shalulile are doing well at the moment‚ but they must push a little bit harder. At the moment we don’t have fans inside stadiums but people still want to see goals and you need goals to win matches.

“Looking at what the guys have done so far‚ I will say so far‚ so good.”

Mbesuma said he is aware that his record will be broken at some stage.

“I am not worried about my record of 25 league goals being in trouble because everything has its time and only God knows when it is going to be broken. I came to SA from Zambia and I was fortunate to have a good season when I scored all those goals.

“I know that someone will come along to take over and break my record so I am not worried if any of the current guys go all the way and break the record this season. In fact‚ I will be happy because someone would have scored many goals to break my record and I like scoring goals myself or seeing other people score goals.”

Denis Onyango hobbled off with an ankle injury in Mamelodi Sundowns’ crushing win over Algerian side CR Belouizdad at the weekend‚ but co-coach ...
Sport
1 year ago

A question on whether Orlando Pirates should be considered serious DStv Premiership title contenders, as they hit form in the crucial death end of ...
Sport
1 year ago

All eyes will be on Bafana Bafana coach Molefi Ntseki when he announces the squad to face Ghana and Sudan in two crucial 2022 Africa Cup of Nations ...
Sport
1 year ago