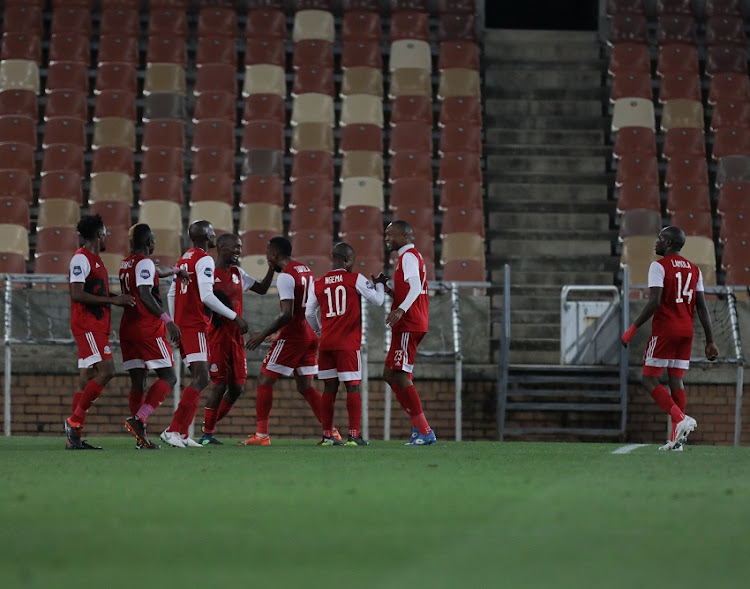 Thabo Rakhale of Tshakhuma Tsha Madzivhandila celebrates a goal with teammates during the DStv Premiership match between Tshakhuma FC and Kaizer Chiefs at Peter Mokaba Stadium on May 4, 2021 in Polokwane.
Image: Kabelo Leputu/Gallo Images

Tshakhuma Tsha Madzivhandila (TTM) chairman Abram Sello has confirmed that the club will go all out during their maiden expedition in the Caf Confederation Cup next season.

TTM‚ who are in the fight to avoid relegation in the DStv Premiership‚ qualified for the continental competition after beating Chippa United 1-0 to lift the Nedbank Cup last weekend in Bloemfontein.

“Definitely‚ we are going to honour this huge responsibility of playing in the Confederation Cup next season in respect of the supporters of the club‚ our province of Limpopo and the country‚” said Sello.

“We will put resources so that the team is able to prepare properly and be able to mount a serious challenge in competition. We are going there with 100% focus and determination because we want to deliver with 100%. Most of the work will happen behind the scenes with the rest of the team to prepare for that challenge that lie ahead.

Maritzburg shoot down Arrows to all but secure Premiership status

The great escape is on by Maritzburg United.
Sport
1 year ago

“This is more about the club but to represent our province and country on the continent and to give joy to our fans who have supported us and we don’t want to disappoint anyone.”

Before they embark on their Confederation Cup programme‚ TTM must first fight to avoid relegation.

After the final win‚ Sello said the players mustn’t have cup hangover, but they lost 1-0 to SuperSport United on Wednesday at the Lucas Moripe Stadium to drop to second from the bottom on the log.

Baroka pulled off a much-needed 1-0 win over fancied AmaZulu during their exciting DStv Premiership encounter at the King Zwelithini Stadium on ...
Sport
1 year ago

“The most important thing at the moment is the remaining matches in the season. We have to manage this overwhelming situation of having the Nedbank Cup, where complacency might creep into our system. We must not undermine anyone in the league at this point because we don’t want to be Nedbank Cup champions but we are relegated at the end of the season.”