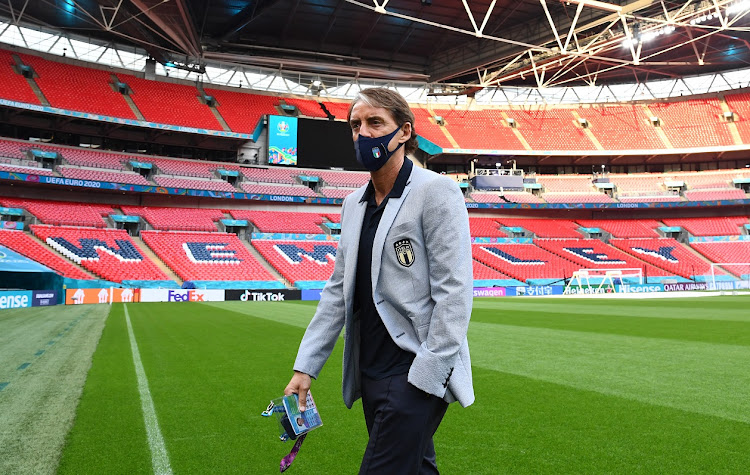 Italy coach Roberto Mancini at Wembley Stadium in London on June 25, 2021, ahead of the Euro 2020 last-16 match against Austria.
Image: Claudio Villa/Getty Images

Roberto Mancini urged Italy to put in a performance worthy of the “footballing mecca” of Wembley when the Azzurri face Austria in the last-16 of Euro 2020 in London on Saturday.

Italy impressed in the group stages by winning all three games without conceding a goal to top Group A, extending their unbeaten run to 30 matches in all competitions.

They go into the clash against Austria, who finished second in Group C, as big favourites to progress to a quarterfinal against Portugal or Belgium in Munich, but it will be their first game of the tournament outside Rome.

“You always need to enjoy playing at Wembley, it is a pleasure because some players never get an opportunity to play in this stadium. It is a wonderful arena and the guys need to produce a big performance because that is what this stadium deserves,” Mancini said.

“You want to be involved in matches in arenas like this. The players need to be happy to be playing at Wembley. When you play in a footballing mecca like Wembley, you need to respect it and produce a big performance and I hope they do that tomorrow — in fact, I am sure they will.”

Mancini has already given game time to 25 of the 26 players in his squad and the Italians impressed in a 1-0 win over Wales in their final group game despite the manager making eight changes to his starting line-up.

“Everyone has given me a selection headache because they have all played very well,” Mancini said.

“We made those changes against Wales and the same went for when we brought on substitutes in the previous matches. It is great to be able to count on the players who are all fit and firing, and all fairly relaxed from a mental perspective. That could be an advantage for us.”

There was much talk in the Italian media about whether the Italian players would take a knee ahead of the game against Austria, an antiracism gesture taken by several teams, but defender Leonardo Bonucci said the squad is yet to decide.

“When we go back to the hotel, we have planned a meeting and will decide as a team,” he said.

“That is what we should have done before Italy vs Wales, and we will have a team meeting this evening to decide what we will do tomorrow.”

When asked about it, Mancini replied: “The most important thing is one’s freedom to choose.”

Wales captain Gareth Bale said on Friday they will embrace their own underdog status against Denmark, the neutrals’ favourites in the Euro 2020 ...
Sport
2 months ago

For Denmark to be facing Wales in a knockout game two weeks after playmaker Christian Eriksen, who made his breakthrough at Ajax, suffered a cardiac ...
Sport
2 months ago

London — Italy stormed into the last 16 scoring more freely than in past European Championships, but it is their near-impenetrable backline that ...
Sport
2 months ago

France coach Didier Deschamps described events in Budapest as magical and insane after his side drew 2-2 with Portugal on a night full of twists and ...
Sport
2 months ago