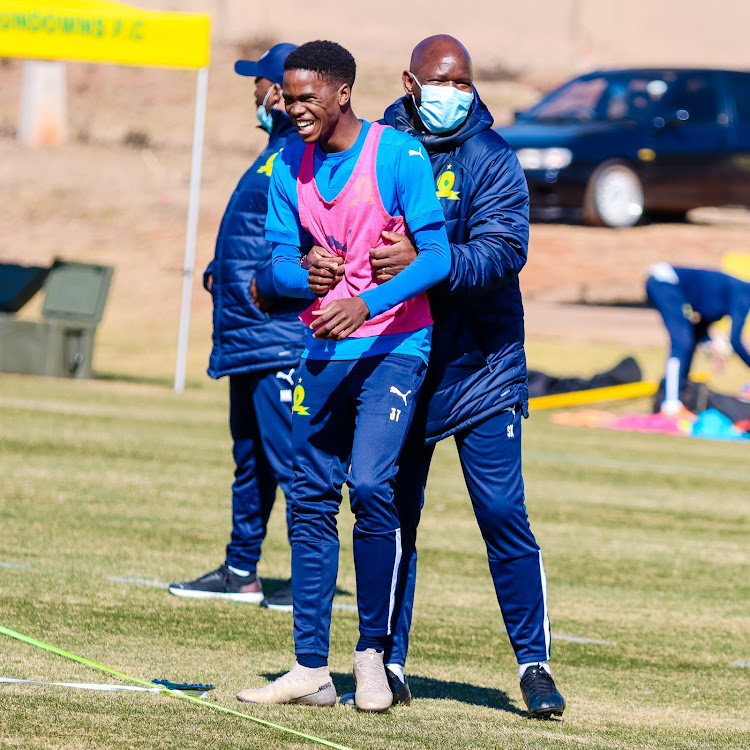 The Sundowns co-coach gave an insight into the two new players as the champions gauge their readiness ahead of the start of the new Premier Soccer League season this weekend.

Mokwena said Sundowns are confident that the six new recruits will be vital for the champions as they prepare for their bid for a record-extending fifth straight Premiership title.

“The first thing is of course integrating the new players into the group and making sure that they adapt to the culture and the personality that we are trying to create of this team‚” Mokwena said .

“And then of course we want to improve our team and certain skills and ways of doing things on the pitch and we have worked on those successfully.”

Sundowns open their new season account with a titanic cup clash against rivals Kaizer Chiefs in the MTN8 quarterfinals at Lucas Moripe Stadium on Sunday and Mokwena has said their preparations have gone well.

“I would like to say big kudos to the players for a fantastic approach towards the pre-season. The work ethic has been extremely pleasing and the players are looking sharp and good.

“This augurs very well with regards to making sure that we are prepared from a technical and tactical perspective.”

Mokwena said the technical team has been working hard to make Sundowns a nightmare to play against.

“We want to be a team that can hurt the opponent in different ways and you have got to create a culture for that.

“It is not just the plan but also the mentality that you have to create‚ and that is something we have been focusing on.

“We must say how happy we are with the progress of the group and the work that has been invested not only by senior players but also the new group of players.”

Mokwena said pint-sized striker Kutumela has been brought in to play as a No.10 and the former Orlando Pirates star embodies the profile of a player that Sundowns did not have.

“The boy is extremely passionate about the game. So he is a boy that we are very excited to have brought in because he is a profile of a player we don’t have.

“But for us we brought him in as a No.10. We felt that we did not have a 10 that can play as a nine when we are attacking and maybe even as an eight when we are without possession of the ball and Kutumela’s ability not just to find and navigate spaces allows him to be sort of the No.10 that can utilise spaces created by a lot of the movements of our centre forwards.

“We are very happy with Kutumela’s addition and his ability to create and score goals for us will come in very handy.”

Mokwena said the Mamelodi-born Ngobeni is an exciting prospect who will bolster their left wing play.

“From a physical perspective‚ he fits the profile of a full-back that we need‚ with speed and endurance and the capacity to go progressively and consistently down the line.

“He projects himself very well to the final third.

“He has that quality to find that final cross and pass in the final third to create chances.

“We feel we have struck gold in bringing Sifiso.”

Willard Katsande has expressed his pleasure at joining an ambitious outfit in promoted DStv Premiership team Sekhukhune United, who he says have ...
Sport
5 months ago

Mamelodi Sundowns co-coach Rulani Mokwena has paid tribute to women in the country on the 65th anniversary of the anti-pass women's march to the ...
Sport
5 months ago