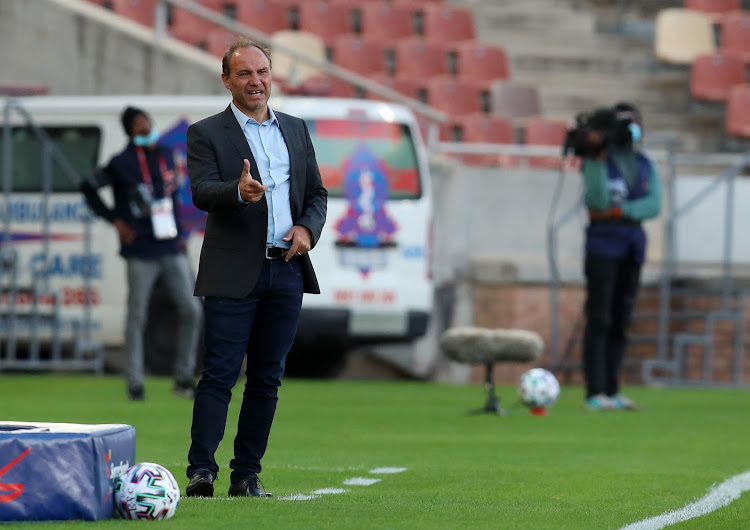 Marumo Gallants only have one point after they lost and drew their opening two Premiership matches to lie rock bottom of the table, but coach Sébastien Migné is confident the character they showed in the Caf Confederation Cup at the weekend will stand his team in good stead and lay a good foundation for domestic success.

The French coach guided Gallants to the second round of qualification for the Caf Confederation Cup after they overwhelmed Equatorial Guinea’s Futuro Kings 4-2 on aggregate.

The Limpopo club put up a gallant display in the first-leg match of the preliminary round, scoring a crucial away goal in a 2-1 defeat.

But they did so the hard way as they travelled with just 12 players to the central African nation, with goalkeeper Washington Arubi only arriving in Mongomo to join the team a couple of hours before kickoff.

Gallants turned the tables in the second-leg match at Peter Mokaba Stadium in Polokwane at the weekend as Celimpilo Ngema grabbed a brace with Thabo Mnyamane scoring the other goal to win 3-0  and 4-2 on aggregate.

“I am very happy because we are through to the next round and we did not concede goals, I am always happy with a clean sheet,” said Migné.

The French coach welcomed the win and progression to the next round of qualification but bemoaned their troubled travelling logistics and taking an incomplete squad for a continental assignment.

“Even with other organisation [during the match] we did good things with the way we were under pressure and it was not easy to come back when you lost the first leg.”

The second preliminary round for qualification of the Caf Confederaton Cup group stages is scheduled for October.

Migné, a former Congo‚ Kenya and Equatorial Guinea national team coach, joined Gallants in July to replace Briton Dylan Kerr, who won the Nedbank Cup with the club last season to earn the right to participate in the Caf Confederation Cup.

The Frenchman started his tenure with a defeat against provincial rivals Baroka in their opening Premiership matches and earned his first point as a coach in SA when Gallants held Orlando Pirates to a goalless draw in their only two league matches so far.

Gallants get on the road again, this time for a trip to the KwaZulu-Natal Midlands for a confrontation with Maritzburg United at Harry Gwala Stadium in Pietermaritzburg on Wednesday at 5pm.

Migné said Bahlabane Ba Ntwa [Gallants' nickname] can have a season to remember if they bring the character and commitment they showed in the Caf Confederation Cup preliminary rounds to their Premiership assignments, starting with German Ernst Middendorp’s United.

“I think if this team continues to work like this, like they did in the Caf Confederations Cup, then they can do something interesting during the season,” said the 48-year-old coach.

“But the season will be long and without a better organisation it will be very difficult because football at this high level is an addition of details and details can make a huge difference.”

Gallants will host Kaizer Chiefs in Polokwane on Sunday before embarking on another trip to KwaZulu-Natal to play Lamontville Golden Arrows in Clermont on October 3 before the Premiership takes a break for the Fifa international window.

Chelsea defender Marcos Alonso has stopped taking the knee before matches this season because the anti-racism gesture is “losing a bit of strength“, ...
Sport
4 months ago

The Mamelodi Sundowns defence has not been breached in four premiership encounters in the new season and co-coach Rulani Mokwena has explained how ...
Sport
4 months ago

The best of Sundowns is yet to come, says coach Rulani Mokwena

Rulani Mokwena has said the best is yet to be seen from champions Mamelodi Sundowns as they set their sights on an unprecedented fifth Premiership ...
Sport
4 months ago

Football fans are still reeling after Royal AM defeated Kaizer Chiefs at the weekend.
Sport
4 months ago