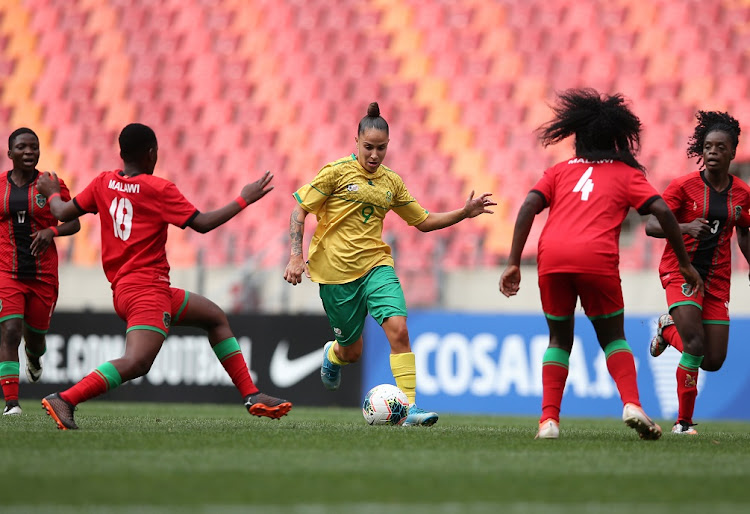 Banyana Banyana began the defence of their Cosafa Women's Championship with a 2-1 win against Malawi at Nelson Mandela Bay Stadium.

Goals from Melinda Kgadiete in the third minute and Noxolo Cesane in the 37th appeared enough to secure a comfortable victory.

The SA women's national team could have won by far more but missed chances, and a late consolation by Wezzie Mvula in the 90th, made for a scoreline that flattered Malawi, even in defeat.

Banyana are seeking their fifth Cosafa Women's Cup in succession, and fifth for coach Desiree Ellis. SA are out to win their eighth title in all.

The South Africans were physically and tactically stronger so kept the ball well, and muscled an advantage that led to two goals by the break.

The first of those came just after the start. After a period of possession across the park goalkeeper Kaylin Swart punted upfield, where Kgadiete was behind the centrebacks but played onside by Malawi left-back Irene Khumalo, to run though.

Goalkeeper Samira Amidu came out of her box but was beaten to the ball by Kgadiete, whose touch in was from 25m.

Malawi had their best chance when Khumalo's free-kick from deep on the left was headed inches wide by big striker Fazila Chembekezo.

But SA made it 2-0 from a comedy of Malawi errors. Janine van Wyk struck a long pass from the back that was fielded by centreback Chimwemwe Madise, who slipped on the ball to allow winger Cesane on the right edge of the box. Amidu was poorly positioned and Cesane's strike went in off a weak attempted save.

Twelve minutes into the second half Kgadiete's first-time strike from the edge of the area had the power to force Amidu to push past the right upright.

Banyana were opening Malawi at will, and peppering Amidu with shots from all angles, Cesane producing another from the right. Given the weight of dominance for the home team, a 2-1 scoreline seemed an injustice. Banyana had themselves to blame for it.

Khumalo, finding herself deep on the right, chipped into the area from 40m, the ball allowed to bounce and fall to Mvula to hit past Swart.

Jordaan: Banyana’s ‘swashbuckling performance has made us believe’

Safa president Danny Jordaan has praised Banyana Banyana's performance against their tough African opponents, painting an optimistic picture of the ...
Sport
7 months ago

Banyana Banyana coach Desiree Ellis is pleased with the commitment and focus of her players after their dominant display against the Super Falcons of ...
Sport
7 months ago

Banyana Banyana beat old foes Nigeria 4-2 in a six-goal thriller in an Aisha Buhari Cup clash that had no shortage of excitement at the Mobolaji ...
Sport
7 months ago

Banyana Banyana coach Desiree Ellis is content after her side's win over Ghana in the first match of the Aisha Buhari Cup played at the Mobolaji ...
Sport
7 months ago