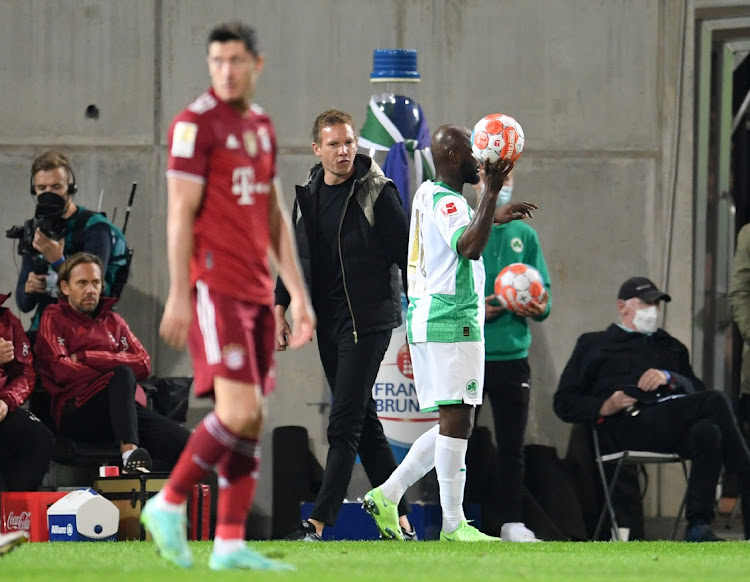 Bayern Munich coach Julian Nagelsmann on Tuesday rejected any talk of his team being favourites for the Uefa Champions League title as too early, ahead of Wednesday's second Group E match against Dynamo Kyiv.

France's former world and European champion Robert Pires had praised Bayern as the best team in Europe and "a top favourite" for the Champions League title in an interview with Germany's Kicker magazine.

"First of all he was a great player and when a great player has an opinion then I listen to it," Nagelsmann told an online news conference ahead of their home game against the Ukrainian side.

"But what is always important is you have to go out and confirm what others say about you.

"There has only been the first matchday and today starts the second matchday."

The Bavarians, who last won the Champions League in 2020, beat Barcelona 3-0 in their opening group game in Spain and are on an eight-game winning streak in all competitions while also leading the Bundesliga race.

"Whoever wants to win it (Champions League) must win the highest number of matches and we will try to do that," said Nagelsmann, in his first season in charge at Bayern.

He will have an almost complete squad to chose from, except for injured Corentin Tolisso and Kingsley Coman, recovering from minor heart surgery.

"There are three points available tomorrow and we want to have six after the first two matches and remain group leaders," Nagelsmann said.

"Kyiv in their league in most games are the top favourites and have a young, talented team. In the league they leave only two players behind (in defence)."

But in their first group match -- a goalless draw against Benfica -- they had less possession than their opponents who had 62%.

"But you still have to create the space. Benfica failed to score despite their possession. The main task will be to play around that compact block. I trust my team to do it," Nagelsmann said.

A decision on whether there will be fans in the FNB Stadium when Bafana Bafana hosts Ethiopia in their crucial 2022 Qatar Fifa World Cup qualifier ...
Sport
10 months ago

The last few days have been hell for those who pledge allegiance to the Kaizer Chiefs flag and Sunday's away league outing against Limpopo strugglers ...
Sport
10 months ago

Mhlongo on Makaringe: ‘At Pirates you don’t need to shine, but deliver’

Fortune Makaringe has put too much pressure on himself and tries to do too much at Orlando Pirates, said former Bafana Bafana midfield stalwart ...
Sport
10 months ago

New Mamelodi Sundowns European striker Pavol Safranko is yet to establish himself in the star-studded squad and has not started a match so far but ...
Sport
10 months ago

Swallows FC stand-in coach Simo Dladla has said that the decision that he would take charge of the team came after a "lengthy meeting" between head ...
Sport
10 months ago

Brighton & Hove Albion manager Graham Potter said Monday's 1-1 draw at Crystal Palace felt like a victory despite his side squandering the chance to ...
Sport
10 months ago

Lionel Messi is expected to play in Paris St Germain's (PSG) Uefa Champions League clash against Manchester City on Tuesday after taking part in a ...
Sport
10 months ago