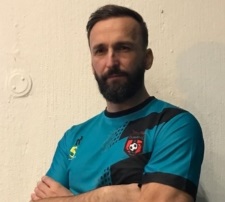 Bottom of the log TS Galaxy have moved swiftly to appoint former Wolfsburg goalkeeper Sead Ramović as their new head coach on a three-year deal.

The 42-year-old Ramović takes over from Owen Da Gama who was relieved of his duties on Monday after the club’s poor start to the season.

Ramović, who is largely unknown to the South African public, played in top European leagues during his career which spanned more than 15 years.

“We are quite delighted to have secured the services of Mr Sead Ramović as the head coach of TS Galaxy Football Club,” said TS Galaxy president Tim Sukazi.

“I’ve known Sead during his playing days, which made his move a seamless transaction. As a young club, we stand to benefit from his experience in top European leagues which includes playing in the German Bundesliga for eight years.

“He is on a Uefa Pro licence programme, which is the highest coaching qualification in the world,” added Sukazi.

The club confirmed that assistant coaches Shaun Bartlett and Esau Mtsweni will continue to coach the club until Ramović is granted his South African work permit.

“He certainly does bring some German precision, which I hope will manifest itself in our organisation set-up. I also trust that our entire team and administrative staff will make it easy for him to settle so that he can hit the ground running,” Sukazi continued.

Ramović will be at the stadium when the Rockets take on Sekhukhune United in their next league match on Saturday at Mbombela Stadium in Nelspruit.

Ramovic represented well-established clubs in Germany such as Stuttgarter Kickers, VfL Stuttgart, Borussia M'gladbach and Kickers Offenbach, and later moved to Norway where he enjoyed a four-year spell with Tromso Idrettslag.

While in Norway, Ramović also played for big clubs like Lillestrom and Stromsgodset and towards the end of his career he also played in countries like Turkey, Serbia, Denmark and Ukraine for clubs like Sivasspor, Novi Pazar, Vendsyssel, and Metulurh Zaporizhya respectively.

Ramović ended his playing career in 2014 and pursued a coaching career.

“I am very honoured to be afforded the opportunity to be the head coach of TS Galaxy, which is an exciting young club with huge potential,” Ramović said.

“I have fortunately known Mr Sukazi for many years, which made everything very easy. I am happy to work with coach Shaun who is a great legend, and I have the greatest respect for him and the entire technical team of the club.

“This is a great challenge given the situation the club finds itself in, but I have no doubt that there is enough talent in the group of players to see things changing very soon.

“Generally, I am the biggest admirer of South African football. I’ve watched many matches of TS Galaxy and I believe that this country is blessed with football talent, which is why I could not resist the opportunity,” Ramović concluded.

TS Galaxy's exciting teenager Ethan Brooks has said he was sad to see head coach Owen da Gama leave but is confident that the team can move off the ...
Sport
2 months ago

Teenage sensation Ethan Brooks’s second call-up to the Bafana Bafana squad to do duty in the Qatar Fifa World Cup qualifiers will inspire a lot of ...
Sport
2 months ago

To do the same thing over and over again and expect different results is tantamount to insanity - these are the sentiments widely credited to ...
Sport
2 months ago

Owen Da Gama has become the first DStv Premiership coaching casualty after he was fired as TS Galaxy coach following a difficult start to their ...
Sport
2 months ago