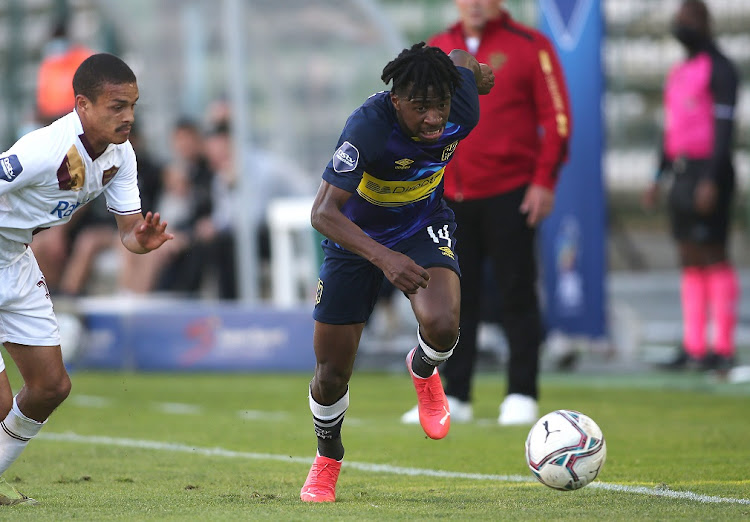 Terrence Mashego of Cape Town City on the attack in their DStv Premiership match against Stellenbosch FC at Athlone Stadium in Cape Town on September 18 2021.
Image: Shaun Roy/BackpagePix/Gallo Images

Cape Town City coach Eric Tinkler has spoken in glowing terms of the levels of commitment of his in-form left-back Terrence Mashego, who he says opted to train on a day when  the squad were given a day off last week.

The energetic and pacy ex-Mthatha Bucks and TS Galaxy defender was named in first the provisional squad then the final 23 for next week's 2022 World Cup qualifiers against Ethiopia.

At 23, Mashego fits the bill for Broos' youth emphasis. Asked about the call-up on the back of City's 4-0 MTN8 semifinal, second leg deconstruction of Swallows FC in Dobsonville on Wednesday night (for an aggregate win by the same scoreline), Tinkler said it was well-deserved, especially given Mashego's work ethic.

“Terrence making the national team was a fantastic achievement for him considering that he only played one season in the PSL here at City,” Tinkler said.

“He was in the NFD [for Galaxy]. When I was coach at Maritzburg United we were also eyeing Terrence and his ability, and City managed to snap him up, and I thought he had a fantastic season last season.

“He was pretty fortunate as Edmilson Dove picked up the injury for as long as he did. It gave Terrence the opportunity to grow very quickly at City.

“But what's important about Terrence is his humility, his professionalism - he works extremely hard at training.

At a rain-swept Dobsonville Stadium Cape Town City appeared to revel in the “home” conditions and left a plucked Swallows FC shivering in the wet in ...
Sport
2 months ago

“I gave everybody off on Sunday - he opted to rather come in and train just to show his commitment to the game and his will to want to achieve better things.

“I think he's a fantastic example of what a true professional footballer should be and how they should behave, and I see a bright, bright future for him.

“He's still young, he's still got a lot to learn - don't get me wrong. He's not the polished product as yet. But definitely his ambition is very high.”

Mashego first caught national attention when he was a star of Galaxy's National First Division (NFD) combination that reached the 2018-19 Nedbank Cup final, stunning Kaizer Chiefs 1-0 in the final. He was awarded the tournament's most promising player.

Tinkler: City want to go all the way in MTN8 and beat Sundowns in the final

For all their domestic dominance over the past six years, Mamelodi Sundowns have surprisingly failed to lift the MTN8 trophy.
Sport
2 months ago

Swallows FC stand-in coach Simo Dladla has said that the decision that he would take charge of the team came after a "lengthy meeting" between head ...
Sport
2 months ago

To do the same thing over and over again and expect different results is tantamount to insanity - these are the sentiments widely credited to ...
Sport
2 months ago