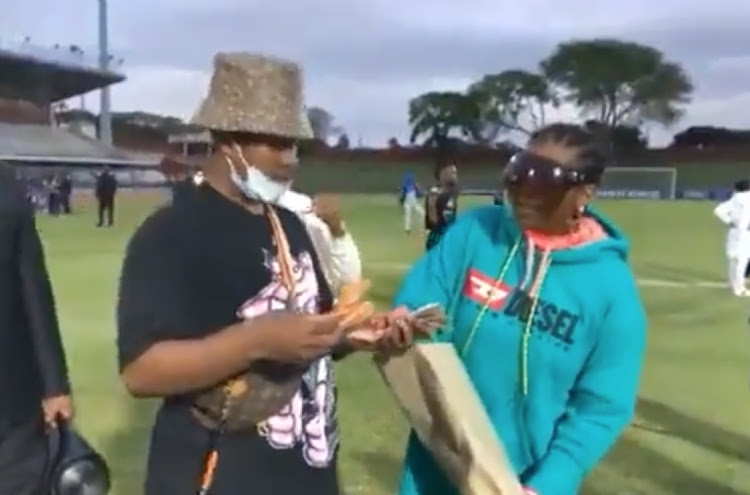 A screengrab of Shauwn Mkhize and her son Andile Mpisane handing out hard cash to players at Royal AM after their 2-1 league win against Maritzburg United at Chatsworth Stadium. PIC: SCREENGRAB
Image: Image: Sceenshot

Premier Soccer League (PSL) prosecutor Nande Becker has confirmed to TimesLIVE that he is going to charge the increasingly controversial KwaZulu-Natal club Royal AM and its various officials.

Royal AM owner and businesswoman Shauwn Mkhize and her son Andile Mpisane set tongues wagging on Sunday when videos showed them handing out cash to players after their 2-1 league win against Maritzburg United at Chatsworth Stadium.

“I am charging Royal AM and various club officials,” said Becker in a brief reply and without going into the details of what charges they are facing and how serious they are.

In the videos of the incident that were shot immediately after their win, some of the players clearly looked uncomfortable as the club officials prepared to distribute piles of cash in full view of television cameras.

It is not yet clear if they will face further scrutiny from SA Revenue Service (Sars) who have made it clear through their spokesperson Siphithi Sibeko that the Tax Administration Act prohibits officials from disclosing taxpayer information.

As expected, the actions of the Royal AM officials has divided the public, with some slamming them as “amateurish” and “unnecessary” while others defended them, saying they can give out incentives whichever way they liked.

Royal AM are not strangers to controversy as they were involved in a protracted and highly publicised promotion/relegation battle in the courts against the PSL during the off season.

Not so long ago, they grabbed headlines when Mkhize, Mpisane and other club officials celebrated wildly, dancing around a Bluetooth speaker at FNB Stadium after beating Kaizer Chiefs 4-1.

Royal AM are playing in the PSL after Mkhize purchased the premiership status of Bloemfontein Celtic before the start of the season in August and they have started the season impressively.

After five league matches, coach John Maduka has guided Royal AM to third spot on the DStv Premiership standings, with 12 points from six matches and they resume league action with a trip to bottom of the log Marumo Gallants on October 17.