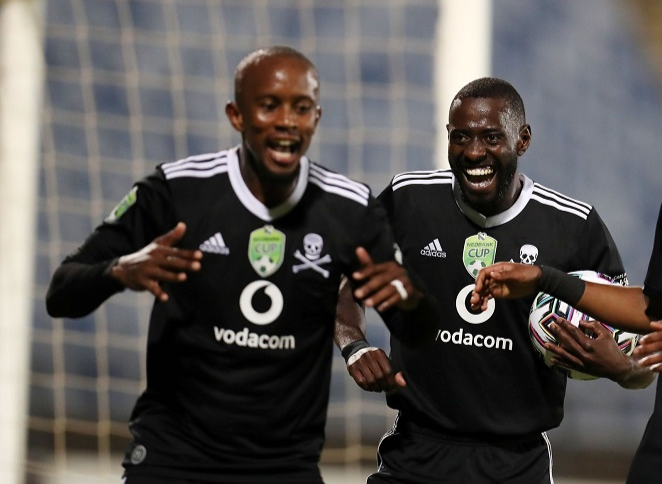 To be honest, it’s very difficult to identify three hot Orlando Pirates players who can trouble Kaizer Chiefs in the Soweto Derby at the FNB Stadium on Saturday.

That’s mainly because of how inconsistent the Buccaneers have been in the DStv Premiership, where they trail log leaders Mamelodi Sundowns by eight points after drawing five and winning three of their first nine league matches.

However, three Bucs players — Linda Mntambo, Tshegofatso Mabasa and Deon Hotto, who have scored a combined five of Bucs’ 10 league goals this DStv Premiership campaign — have the potential to swing the game their team’s way.

The 32-year-old Soweto-born player has been Bucs’ best player in their last two games where he scored two goals, the critical one in their 2-1 victory against Sekhukhune United in midweek and the other salvaging a point in the weekend's 1-1 draw against Royal AM.

Mntambo operates on the right of the midfield and gives Bucs a lot of options going forward. At his best he provides a good pass to the strikers but is also vital in set pieces and is the club’s trusted penalty taker.

If Chiefs give space to Mntambo to have time on the ball he will hurt them in so many ways. The Bucs midfielder often tries to do too much and loses the ball unnecessarily when the going gets tough.

For reasons hard to explain, Hotto has struggled to convince coaches Mandla Ncikazi and Fadlu Davids that he’s the player who should start all Bucs' games. He started in two of Pirates' nine games and came on as a substitute in the other six and sat on the bench unused against Royal AM.

The Namibian left winger is a player with a temperament for big matches and has showed that with his other performances against Amakhosi, even when he’s not the one scoring the goals. Hotto should keep Chiefs’ right-back Njabulo Blom very busy on Saturday, especially with the support he will get from Paseka Mako behind him.

Mabasa has been blowing hot and cold but on his day he can pose big trouble to any opposition defence. He’s the player Eric Mathoho and Daniel Cardoso, Kaizer Chiefs’ usual central defensive pairing, have to guard if he gets good supply from Mntambo, Hotto and Fortune Makaringe.

The only problem with Mabasa is that he comes to this match low on confidence after failing to score in Bucs’ last five league matches. It doesn’t help Mabasa’s cause that he also enters the derby having been dropped by Bafana Bafana coach Hugo Broos in his latest squad, but on his day the big man can be lethal.

Orlando Pirates co-coach Mandla Ncikazi is worried about his team’s conversion rate going into the Soweto derby against Kaizer Chiefs on Saturday at ...
Sport
6 months ago

Orlando Pirates have an injury list that could easily have been a team list, co-coach Mandla Ncikazi has said ahead of Saturday’s DStv Premiership ...
Sport
6 months ago

Kaizer Chiefs coach Baxter on Hlanti’s devastating injury: ‘It was like a pistol shot’

In-form left-back Sifiso Hlanti looks set to miss the rest of the 2021-22 season with a devastating injury in training on Thursday, Kaizer Chiefs ...
Sport
6 months ago