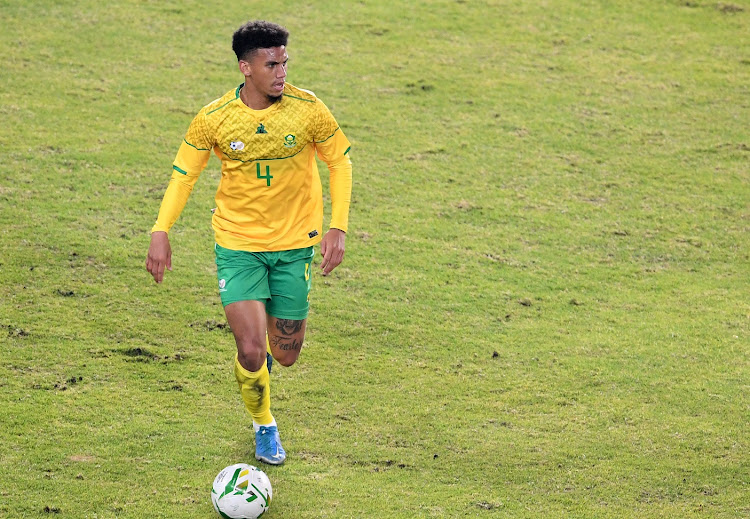 Cape Town City coach Eric Tinkler has said his ex-player Rushine de Reuck needs to “be strong” to bounce back from being at the wrong end of an appalling penalty call for Bafana Bafana in their heartbreaking World Cup defeat against Ghana.

Tinkler is credited by De Reuck with an improvement in the defender’s game at Maritzburg United when the Bafana legend coached there from January 2019 to November 2020 before the centreback signed for Mamelodi Sundowns in January 2021.

Tinkler said he completely understood why tearful De Reuck was inconsolable at the final whistle in Cape Coast on Sunday night, even though it was Senegalese referee Maguette N’Diaye who was at fault with a horrendous penalty call.

De Reuck appeared at most to minimally make contact with Daniel Amartey, who clearly dived, resulting in Andre Ayew’s 33rd-minute spot-kick strike. The 1-0 win saw the Black Stars (13 points, +4 goal difference) progress to the final round of 2022 World Cup qualifying, and Bafana (also 13 and +4) exit by the narrowest of margins, on goals scored in Group G (seven to six).

“When I arrived at Maritzburg I was so surprised to see the talent they had in Rushine de Reuck, and I questioned how it was possible that no-one in Cape Town had spotted him,” Tinkler, a 1996 Nations Cup-winner with Bafana, told TimesLIVE.

“I then found out he was in Portugal for Paços de Ferreira, a team in their Primeira Liga. And I said to myself, ‘Well if that team saw the talent in him then obviously that is a fact — he’s extremely talented’.

“The other thing I saw in Rushine was his bravery. I saw him in one of our games on the floor putting his head in front of a guy’s boot to clear the ball. He is competitive by nature, and doesn’t want to concede goals.

“So the fact that he felt the way he did does not surprise me because he’s extremely passionate about his game and he wants to achieve. He wants to get back to Portugal. In my conversations with him that has been his dream to be able to get back to Europe.

Rushine De Reuck, Is in pain after that dubious penalty decision. He feels he let the country down. Ntate Kompela need to intervene. We still need him with his confidence back. pic.twitter.com/YgJVfVAPXH

“I explained to him then, ‘If that is your dream then you need to get into the national team, because that’s going to be the platform for you to go back overseas’.

“So he’s extremely focused and hard-working. I was very happy to see him move to Sundowns. And at Sundowns he’s growing — he’s become a lot better on the ball with what they’ve been doing with him.

“So, shame, I feel for him, especially knowing that should never have been a penalty.

“I know how he feels. I qualified SA for two World Cups and didn’t go to one. And that was probably my biggest disappointment in my career.

“But he’s a strong character. He comes from a very difficult background. And he’ll get over it. He’s strong enough mentally to get over it.”

Rushine de Reuck is a better defender than an £80m chap who captains an English Premiership and plays for the Three Lions. pic.twitter.com/wjFg8LCNw9

Tinkler said the experience for De Reuck, 25, a younger player drafted into Bafana as a starter by coach Hugo Broos as he has omitted front-line stars with the aim of building for the 2023 Africa Cup of Nations, will build character.

The City coach’s advice to De Reuck was: “Be strong. Don’t blame yourself because it’s definitely not your fault.

“But these things happen in football. Us coaches get hired and fired on bad decisions of referees sometimes.

“That’s the world we live in, that’s professional sport. There as to be a winner and a loser. Sometimes it’s fair, sometimes it's not. But you’ve got to get up and go again.”

De Reuck, a product of Cape Town’s ASD Academy, spent a year at Paços de Ferreira as an 18-year-old, returning to SA to play for First Division Milano United.

Rushine De Reuck was inconsolable as he walked off the pitch at Cape Coast Sports Stadium in Ghana on Sunday night, and he clearly blamed himself for ...
Sport
2 weeks ago

"Congratulations to the referee. He was Ghana's most impressive player," wrote one fan.
Sport
2 weeks ago

The SA Football Association suspects Bafana Bafana's defeat to Ghana in a crunch 2022 World Cup qualifier on Sunday night may have been fixed, and ...
Sport
2 weeks ago