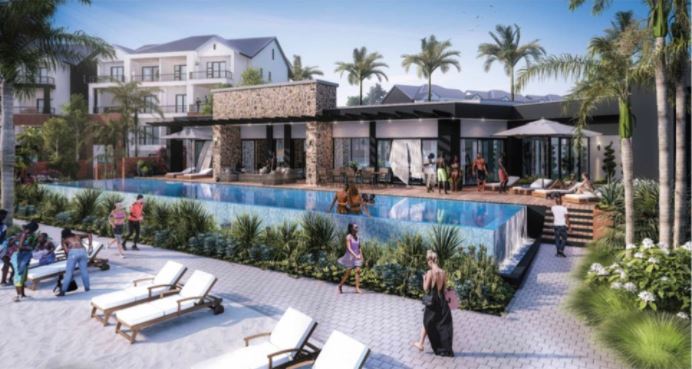 SCRAPPED The Blyde Mint Villa as a concept. The villa has been built and was to be the base of the Byde Mint Hotel.
Image: Balwin via Twitter

In a new twist to the Pretoria “beach” saga, Balwin Properties will no longer be building its 60-room Mint Hotel, despite already spending R3m on planning the new development.

Balwin Properties, which owns the Blyde Riverwalk Estate, has been locked in a months long wrangle with homeowners who live there permanently and owners who bought flats as investment properties and lease them out to different visitors for short periods. The latter are known as short-term lessors (STLs).

The Blyde Homeowners Association (HOA) voted last Thursday against STLs. Balwin said this followed numerous complaints to the HOA “over a period of four years, over the unruly conduct and noise disturbances that have become the norm, especially over weekends”.

The developer said it was inundated with complaints from residents about overcrowding of the lagoon area by guests from STL apartments “as well as residents do not feel safe and secure within the development, which is of great concern for all stakeholders”.

Blyde lessors: your tribe has spoken — no more holidays at the 'beach'

It's official: you have until November 30 to rent a holiday apartment at Pretoria's only "beach".
News
7 months ago

This has had a major impact on the STLs who need the rental income to cover their bond payments. This group of owners claimed Balwin is pushing them out because it wanted to dominate the short-term lease market through its planned new development: the upmarket Mint Hotel.

Balwin has denied the claim, but on Thursday the developers admitted, for the first time, to plans to build a hotel after months of speculation by homeowners.

We believe that the discontinuation of the construction of the hotel is in the best interests of the The Blyde Estate, as well as all stakeholders concerned.

Balwin now says it has received communication from several owners expressing concern about the development of the boutique hotel — and has decided to halt its plans.

Balwin said in a statement: “These concerns predominantly revolve about returning the estate to a development focused on the prioritisation of the safety and security of all permanent residents and assurance that residents can freely and peacefully enjoy the lagoon area in a family-inclusive environment.

It seemed like a winning combination for people of landlocked Gauteng — a safe, trendy and relatively affordable estate with a turquoise “lagoon” ...
News
7 months ago

Also, below the area demarcated for the hotel is an “ultra-luxury” villa owned by Balwin with Mint Hotels and rented to wealthy clients.

STLs used this to leverage their argument that the developers wanted to be the only ones to profit from STL.

This in mind, Balwin on Tuesday indicated that the villa located at the doorstep of the lagoon will be disposed of for about R10m “which is expected to further enhance the value of the apartments across the development”.

Balwin CEO Steve Brookes said: “We have a 26-year track-record of going the extra mile for our homeowners and have always been open to engagement. We will continue to act decisively and with integrity to protect the interests of our clients.

“Having engaged with numerous stakeholders, we believe that the discontinuation of the construction of the hotel is in the best interests of the The Blyde Estate, as well as all stakeholders concerned and this entrenches our belief that we want to restore The Blyde to a family-focused environment for the enjoyment of its homeowners and long-term residents.”