Diving into the light

Helen Walne was scared of the ocean. Then she plunged in and discovered a magical world of kelp forests 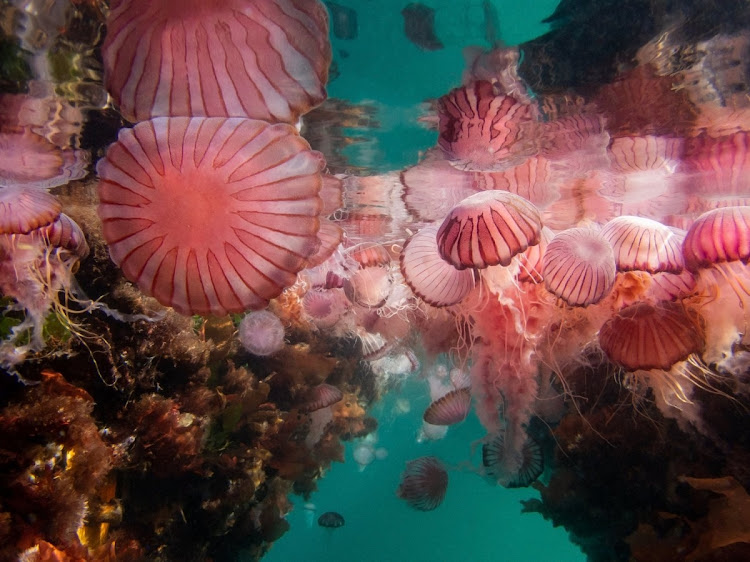 SMACK OF PINK A smack of jellyfish off the Cape coast.
Image: Helen Walne

The “underwonder”, as Helen calls it, not only helped her to heal from a devastating personal loss, but her astonishing photographs of the kelp and its creatures inspire thousands to respect and protect this precious ocean ecosystem.

OCEAN WARRIOR Helen Walne is opening her and others' eyes to the wonders of the ocean.
Image: 'Underwonder'/Michael Raimondo

Helen Walne had every reason not to go back in the water.

When she was six she had a near-drowning experience in her hometown, Durban. She was swept out by a rip current and grated on the mussel-studded pier; her injuries were bad enough to land her in hospital and left her terrified of the ocean.

“My dad would take me out to the breakers to swim when I was a teenager and I used to get this absolute panic in my chest, like I’m-going-to-die terrible anxiety.” She chose the safety of swimming pools over the sea.

Then in 2007 her brother Richard took his life, drowning off the coast of Cape Town.

“After Richard died I went a bit mad, but he loved the water and I decided to ‘pull myself towards myself’ and started swimming.”

Helen swam every day, through winter, in an open-air pool. “It was just soothing and meditative. It was a way of repairing, I guess. It was like medicine.”

She decided it was time to brave the ocean and joined a weekly Camps Bay swimming group called the Hot Chocolate Swimming Club. Camps Bay water is notoriously cold. “But this was way before cold-water swimming became trendy. It’s like shocking yourself back to yourself in some way.”

Waves still scared her, but as her confidence grew Helen entered some open-water races. “I was always pretty much at the back, but it didn’t matter. I just inserted myself into this whole other community that I didn’t even know existed.”

During those training swims she often found herself lingering around a specific patch of kelp. “It wasn’t much, but it was magnificent the way the light would come through, and there were little fish, and it was just the most beautiful thing I had ever seen.”

The wheels fell off, she says, when she started taking her husband Brandon’s action camera with her. “I realised that what I actually wanted to do was slow down and look at the kelp. I wanted to learn about it and I wanted to be in it. I didn’t want to be swimming as a sport. I guess I just wanted to regain some joy because I was still really heartbroken. And if you are in the water you don’t really think about much else.”

Helen turned that newfound joy into wonder and delight for her Instagram followers by documenting what she saw during her daily tidal pool swims. “I like to call what I do ‘snorkelling and looking for pennies’. Like when you’re a kid. I move incredibly slowly. 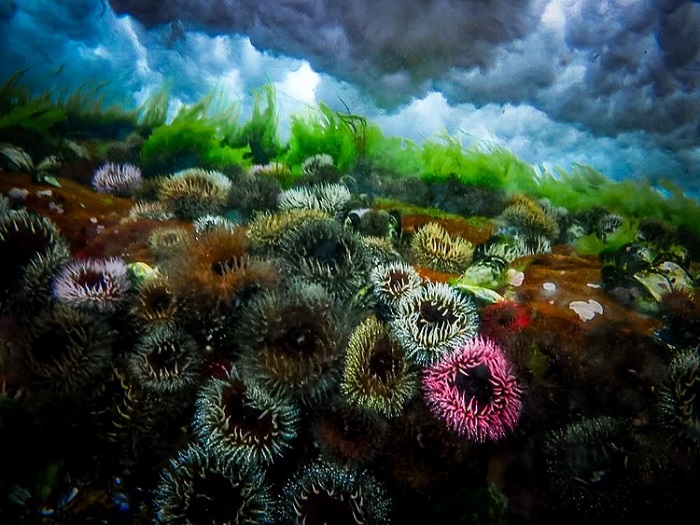 Anemones are among the wonders that draw Helen Walne and her fellow 'science and nature geeks' into the water.
Image: Helen Walne

She recognises many people are intimidated by kelp forests. “A lot of people say they’re too scared to do it or they don’t know what to do. I feel like every time I dive down it’s to get treasure and show it to people. I love the fact that, through my photographs, they’re able to experience it.” She also dives to experience her own altered state — “a combination of the cold but also the visual extravagance”.

Helen is constantly amazed at how everything works together in the kelp forest ecosystem. “The kelp basically buffers you from the big ocean, so it’s a nursery for little baby fish and shrimp, down to the tiniest nudibranchs, to whelks, to different kinds of snails. Everything is fascinating when you slow down enough and really look.”

Initially Helen had no idea what she was doing with her camera. “I couldn’t even see what picture I was taking — the camera didn’t have a screen at the back. It was all just about the light.”

By “just pointing” her camera Helen captured a magical world of  “sherbet-hued noble corals, toucan-red algaes and flowing capes of kelp”. Not to mention the psychedelic impossibility of her favourite nudibranchs — so much more than your average mollusc.

Helen makes these otherworldly creatures accessible through genius captions, pairing the visual splendour of her pictures with the everyday absurd.

You won’t regret setting an hour aside to visit @helen_walne on Instagram. Beyond being entertaining, her posts are a treasure trove of facts about fascinating creatures and the dangers that threaten their fragile ecosystem.

But she didn’t start with an Instagram strategy. “I’d see an octopus and I would be immediately like: ‘Oh my god, Douglas!’ you know? I think it’s also a way for me to work through the modern world, as well as to make it relatable to people. We often just don’t say the stuff we all think.” She admits she sometimes worries about the anthropomorphising — “reducing these poor creatures to these hideous human things”. But at the same time, she wants to provide some relief. 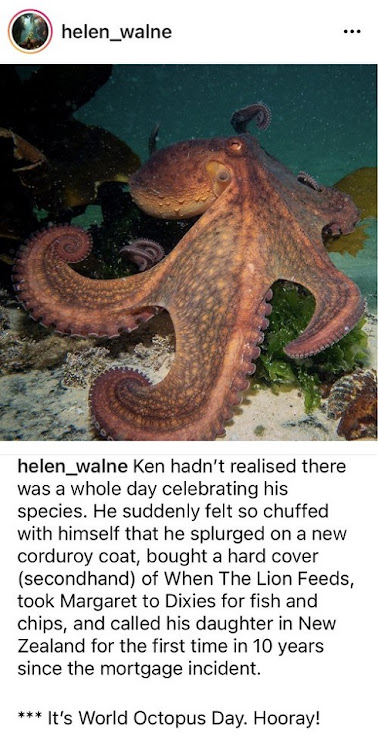 She also admits to getting more serious of late. “I’ve actually been quite worried about the sea recently and I can’t make a joke of it. I see it in trouble.”

The second time Helen nearly drowned was in her early diving days. She took a post-swim detour to visit a prime snorkelling spot she’d heard about. She had a new weight belt to help her “look at things properly”.

She didn’t know the bay in question was the same one in which her brother had drowned.

“I’d avoided looking at that stretch of coastline for two years. I couldn’t even look at it driving past in the car. I wanted nothing to do with it. But somehow I was being drawn by something, to go there with my belt that had double the weight I should have had on it.”

She was tired, the sea was rough and the narrow gully entrance to the bay was tricky at the best of times. The tide turned, the swell picked up and the weight belt kept pulling her under. “I basically had a panic attack,” she remembers. “I got smashed on the rocks and eventually I started screaming for help.” Luckily there were other divers on the scene to pull her out.

When Helen wrote a book about her relationship with her brother and the tragedy of his death, she called it The Diving (Penguin Random House), but she was only drawn to free diving after he was gone.

After her near-drowning she signed up for a free diving course.

She also bought a better camera and became a stalwart of Cape Town’s ocean conservation community — a bunch of  “science and nature geeks” showing the power of amateur citizen scientists can make a difference. 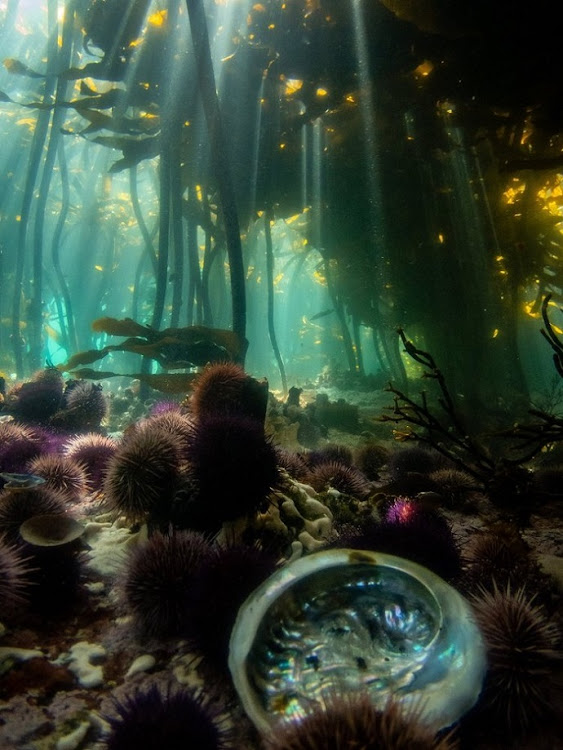 'The kelp basically buffers you from the big ocean, so it’s a nursery for little baby fish and shrimp, down to the tiniest nudibranchs, to whelks, to different kinds of snails. Everything is fascinating when you slow down enough and really look,' says Helen.
Image: Helen Walne

She scripted The Blue Blanket, a beautiful animated ode to the sea and its link to our ancestors. The short film was used in the campaign against seismic drilling in SA, which took on oil giant Shell and sent it packing.

She was also part of a campaign to stop Cape Town using chemicals to “clean” its tidal pools; their walkways are now kept algae-free with high-pressure spray that prevents them from becoming slippery, but doesn’t poison the sea life below.

These days Helen says she’s obsessed with “this beautiful algae that is so red it’s like rubies. It’s crazy. It just glows in the light and it’s magnificent.”

Long may her obsession, and her sharing, continue.

This article was first published by the Lewis Pugh Foundation.