Told with brave honesty and bold description, the stories of the Zimbabwean immigrants are simultaneously heart-breaking and heart-warming

It’s 2008 and the height of Zimbabwe’s economic demise. A group of passengers is huddled in a Toyota Quantum about to embark on a treacherous expedition to the City of Gold. 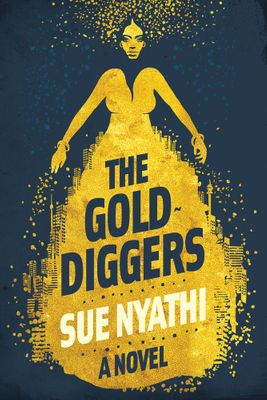 Amongst them is Gugulethu, who is hoping to be reconciled with her mother; Dumisani, an ambitious young man who believes he will strike it rich, Chamunorwa and Chenai, twins running from their troubled past; and Portia and Nkosi, a mother and son desperate to be reunited with a husband and father they see once a year.

They have paid a high price for the dangerous passage to what they believe is a better life; an escape from the vicious vagaries of their present life in Bulawayo.

In their minds, the streets of Johannesburg are paved with gold but they will have to dig deep to get close to any gold, dirtying themselves in the process.

Told with brave honesty and bold description, the stories of the individual immigrants are simultaneously heart-breaking and heart-warming.

Sue Nyathi was born and raised in Bulawayo and resides in Johannesburg. An investment analyst by day and a storyteller to her son at night, she writes to escape the reality of financial markets and economic shop talk. She made her screenwriting debut on the award-winning e.tv series Matatiele. Her first novel, The Polygamist, was published in 2012 and readers can look forward to its film adaptation in 2019.

Every morning Portia paraded down Pritchard Street to the offices where she worked on the corner of Market Street and Von Brandis Street.

Even though her shoes squashed her corns and made her feet swell she bit down the pain and soldiered on.

She practiced walking in her heels diligently in her apartment. Many times before she had fallen flat on her face leaving her son reeling with laughter.

However, Portia was determined to master the art of walking in high heels like her work colleagues at Hulisani, Hirsch, Hlomani and Associates.

They occupied the seventh floor which they shared with some accountants and consulting engineers.

Portia sat in the reception greeting clients with a sunny smile and answering telephones with practiced efficacy.

She had not always been in the foreground. Instead she had lingered in the background; cleaning toilets, making tea and sweeping the office floors. Beyond these chores she was often sent to run the personal errands of her bosses.

Advocate Hirsch loved a particular brand of Colombian coffee, which she bought at a café at the corner of De Korte and Juta Streets.

Advocate Hulisani often sent her to pick up his dry cleaning from a laundromat on Eloff Street.

When lunch time came, she would go and buy Advocate Hlomani his chesa nyama lunch on Commissioner Street. He thrived on his staple of pap and braaied meat and never deviated from the set menu. Sometimes when the messenger was out running errands and there was an urgent delivery to be made they sent Portia.

It was for this reason that Portia had made a habit of memorising street names. Kotze. Loveday. Kerk. Plein. She had a map of the CBD etched in her head. It was the only way she could navigate the city of Johannesburg without getting lost.

Even if she got lost, which she had on many occasions, if she could find a familiar street name she would easily find her bearings once again. With the passage of time Johannesburg had become less intimidating and more accommodating.

She had no idea how the city actually came to be christened 'Johannesburg', which to her seemed like an odd name.

The origins of the name 'Johannesburg' were contentious but most accounts seemed to allude to the fact that the city was named after Johannes Joubert and Johannes Rissik, men who had both been responsible for land surveying and mapping of the town.

The combination of their first names let to the coining of 'Johannes-burg'. The suffix being an Afrikaans word meaning 'town'.

But whatever you wanted to call her. Egoli. Joni. Jozi. Joburg. Johannesburg was undeniably one of Africa's economic powerhouses and it is for this reason that she was able to lure people from all over the continent.

All of them were gold-diggers seeking fame or fortune. Or both.

Portia had found her gold nestled amongst the overgrown grass in Joubert Park. For the first few weeks in the city she and Nkosi had slept on the vacant seats in the busy transit terminal. They slept in good company with other passengers who were transiting from one city to another.

Every morning they showered in the public ablutions. When they were clean they would spend the day roaming the city with Portia knocking on doors for a job. Any job. Doors were slammed in her face.

Exhausted and dejected they'd spend the rest of the afternoon at Joubert Park. Nkosi had even made friends with children who had finished school. Portia would watch him from the park bench, trying not to feel sorry for herself.

Her optimism was wearing thin and so was their money. She spent her every penny sparingly but two months of sleeping on the streets was enough to get her worried. She contemplated catching a taxi back to Plumtree with the little money they had left.

Her husband had been right; Johannesburg was no place for a woman. But then Nkosi had kicked a soccer ball under the park bench where Portia was seated. When she bent over to retrieve it she stumbled across a handbag which looked like it had been thrown hurriedly under the bench.

Curiosity got the better of her. The bag had already been ransacked, it seemed. However, the real treasure was the green ID booklet. She took possession of it and threw the bag aside. She quickly shoved the booklet into her bra.

The next day Portia assumed her new identity as Phakama Hlophe. After a visit to Harrison Street she was able to get a password-sized picture which she superimposed on Phakama's picture. Armed with her new ID, Portia went about trying to enrol Nkosi into a crèche. Little Angels Daycare Centre was happy to take him.

She paid the enrolment fee and left him there as she went about her job-hunt. By the end of the week she had landed herself a position as a cleaner with Hulisani, Hirsch, Hlomani and Associates.

Portia and her son continued to sleep at Park Station. They ate the leftovers that she cleaned off the plates from the staff at work. She would walk Nkosi to crèche every morning before racing off to work.

Sometimes when she arrived in the morning she would find Advocate Hulisani still in his office looking ruffled and exhausted with bloodshot eyes. Of all the advocates he was the most vocal and often succumbed to fits of rage. It was not unusual to see interns or legal assistants running out of his office followed by law journals and anything else he could throw at them. Often after such incidents Advocate Hirsch would go into his office to calm him down.

Clifford, the messenger, had told Portia countless times that Advocate Hulisani was good at his job, which is why his name appeared first. His reasoning however could not be substantiated and Portia never questioned it. Clifford maintained that Advocate Hulisani insisted that the practice would die if he ever left. Portia was fearful of him and tiptoed around him lest he unleash his rage on her.

When month-end came Portia was excited to receive her first salary. That night she and Nkosi did not eat leftovers but instead from one of the fast-food restaurants at Park Station.

When they went to sleep on one of the benches Portia assured her son they would be doing it for the last time.

The following day they went hunting for a place to live.

They managed to find a one-bedroomed apartment on Edith Cavell Street. It was a threadbare apartment with the cupboards almost coming off the hinges. The landlord said that was the reason he only wanted R1 000 for it. They slept on the parquet floor on their sponge mattresses which they had purchased for R600. Portia assured her son that things would be better.

"Next month I will buy you a new bed."

Nkosi threw his tiny arms around her and hugged her.

At night Portia dreamt of all the things she would do once she got her second pay cheque. The new stove. The new sofa. The new television set. She fell asleep dreaming about the new bed.

One afternoon at work, as she was washing cups in the kitchen, she heard Advocate Hulisani shout that he needed some documents typed. Portia went to the front to hear what the commotion was about.

"Where is everyone?" he screamed. "Where are the interns?"

Hulisani kicked the plant in the reception knocking it over. Portia quickly rushed to catch it but it was too late.

"I need this document typed now!" he screamed.

"I will call her," replied Portia shrinking away and heading towards the switchboard. At times she did hold the fort for Kopano when she wanted to take an extended lunch. Kopano's phone just rang. Portia hung up feeling disconcerted.

He eyed her circumspectly. "Are you sure?"

Portia had taken a typing course at school. She could type 80 words a minute so when her fingers hit the keyboard she was not in totally unfamiliar territory.

The computer keyboard was much softer than the typewriter and her fingers slid across the keys.

She typed whilst Advocate Hulisani paced the room as he dictated to her. He often came round to look over her shoulder to see if she was actually typing.

By the time Kopano came back Portia was editing the document, checking it for errors.

Advocate Hulisani was so impressed with Portia that Advocate Hirsch and Advocate Hlomani soon got wind of it. They started saying her talent was being underutilised in the kitchen as a cleaner and that was how Portia got promoted to front office.

She now sat with Kopano and helped with other office duties. Her promotion came with a pay increase which Portia welcomed.

The following month she and Nkosi moved from the grimy apartment to a beautiful high-rise apartment on Kerk Street in the heart of the Johannesburg CBD. It was clean and secure with controlled access.

She could sleep at night without fear in her heart.

She could now afford to shop at the department stores like Edgars, Foschini, Spitz and Truworths. She had brought her furniture from Russells and Morkels. For the first time she felt like she was living the life she deserved. A life she was determined to live to the fullest.

As much as possible Portia tried to emulate the ladies at work. She looked at the way they dressed and would improvise slightly and come up with her own look.

She listened to how Kopano and the other ladies spoke and would imitate them.

She would practice religiously at night, imitating the intonation and mannerisms. Gradually the old Portia began to disappear, making way for Phakama.

Portia always enjoyed the brisk walk to work through the CBD. The town was always full of life and joie de vivre. The only time it took a sojourn was on Sundays.

On those days she went to church at the Methodist Church on Delvers Street. She could easily have attended the central Methodist Church on the corner of Small and Pritchard but it was overflowing with Zimbabwean refugees who poured into Johannesburg like heavy rain.

The church sheltered thousands who slept on its floors. Portia preferred to distance herself from her kith and kin.

Phakama had no place being there.

She felt no allegiance to or kindred spirit with them.

She had a new life now.