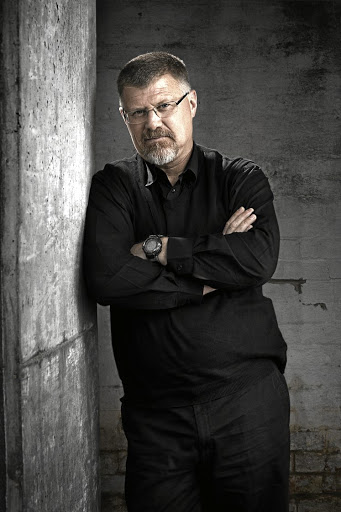 If you’re already a fan of Deon Meyer’s Benny Griessel and Vaughn Cupido thrillers, you’ll be excited to learn the next in the series launches worldwide this month.

If you haven’t read any of Meyer’s books, grab a copy of The Dark Flood — you can read the series in any order — and catch up on the earlier books later.

In a starred review, Kirkus calls The Dark Flood  “A well-crafted blend of suspense, culture, and humour. Meyer is terrific”. That sums it up pretty well.

At the end of the last book, The Last Hunt, Benny and Vaughn know their jobs are on the line when they fall foul of the corrupt management of the SA Police Service. At the start of The Dark Flood they’re demoted to ordinary detectives in Stellenbosch.

Their first case seems to indicate a boring future: a student has disappeared from a residence at the local university, probably off with friends somewhere. However, something else is going on. They are slipped pictures of a senior police officer holding a firearm they know he shouldn’t have.

In the meantime, Sandra Steenberg, an estate agent struggling to make ends meet for her family, suddenly has the opportunity to earn a huge commission on the sale of an iconic wine farm. But there’s a catch. She has to deal with the crooked businessman, Jasper Boonstra, who caused the slump in the Stellenbosch property market when his business empire there collapsed like the house of cards it was.

In this in-depth interview for The Big Thrill, Meyer talks more about the latest instalment in the Griessel and Cupido thriller series.

The name of the farm sold is a crucial pivot of the book, Donkerdrif , and also the Afrikaans title of the novel. How does it link with The Dark Flood?

We had a really hard time coming up with an appropriate English title. In Afrikaans, Donkerdrif has a double meaning —a dark ford where you cross a river (many farms in SA are named after a ford), but also a dark passion. The dark passion is the greed that drives the behaviour of many characters in the book, so eventually we decided The Dark Flood was the best alternative for the English title. 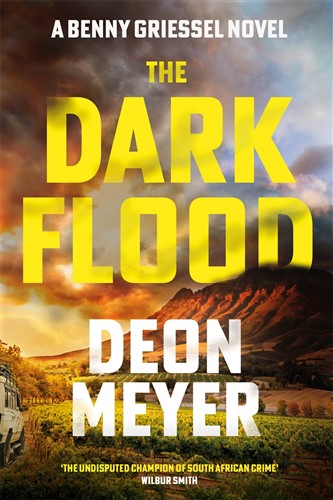 Stellenbosch had a real financial crisis a few years ago with the collapse of an international conglomerate in a similar way to the collapse of Boonstra’s business empire. How much of the back story is based on that event?

I live in Stellenbosch. When my wife and I were searching for a home here 12 years ago, we struggled to find something suitable, so we spent quite a lot of time with estate agents. I often ask people about their stories because you never know where the next idea may come from. One young lady told me a lot about the shenanigans that go on between estate agents. That led to the character Sandra Steenberg. Then, when I started researching the book, semi-state companies were collapsing under the greed of state capture, and that was followed by corporate collapse also driven by greed. I saw the devastating effect of that on the town, including the slump in property prices. I thought the combination of these would be a lovely way to shape Sandra’s character and put more pressure on her.

Sandra is an interesting and conflicted character. She’s a hard-working estate agent, committed wife and mother, but she hides their financial problems from her husband, and although she detests him, she’s willing to go along with Boonstra to get a fat commission. Later, she’s willing to go way outside the law to protect it. How did you conceive her?

As I said, I had the idea of an estate agent as a character 12 years ago, and then when Stellenbosch experienced the financial collapse, I thought a young woman would be the right character to develop. It was quite hard to find a suitable person to interview because most women in the industry are middle-aged or older. But I met someone and had long chats with her. In a way, she became the role model for Sandra, because this woman was working so hard and struggling so much in a market that was very tough.

It was part of the motivation, but I knew after the previous book there had to be repercussions for Benny and Vaughn if I wanted to remain credible to SA readers. At the time of writing, the pro-[former president Jacob) Zuma forces in the police were strong, and they would have had their long knives out for Benny and Vaughn. I think it’s getting better now, but as with all things in SA, there are wrongs to be righted, and it’s going to take time. President Cyril Ramaphosa doesn’t have the space to manoeuvre too quickly.

The Dark Flood is published by Jonathan Ball Publishers.

Test your book knowledge with this 20-question literary quiz.
Books
4 months ago