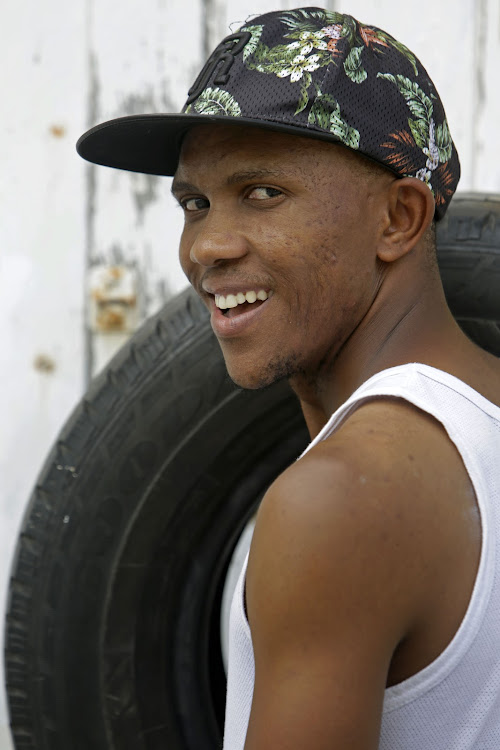 As an award-winning actor, director, playwright, and poet, you seem to have mastered the art of telling stories! Why do you think telling our own stories in South Africa is so crucial?

The revisiting of our social wounds is sacred — it reminds us of the holes of humanity that still need to be filled up. We are not just telling stories but re-telling and re-imagining our everyday realities. In performance, the spectator finds a moment of stillness to receive and digest. We make theatre to put back what we have lost as humans.

Congratulations on your well-deserved wins with your play Kudu at Cape Town's Fleur du Cap theatre awards this year! As a writer and director of the piece, winning for best new SA script and best director must have been a huge thrill. Do you hope that your wins will encourage writers who want to tell local stories in languages other than English?

Yes! It is very important for us to reposition ourselves in the epicenter of theatre by using our indigenous languages. They are a reflection of a long ancestral connection. We might not return to the original source, but the attempt is a powerful way to heal our colonial wounds. Since we make ourselves visible through language use, these storytellers will find inspiration and confidence in their own selves.

There is often talk about how mainstream theatre remains a very white and western space. Can you talk about ways in which that can and must change?

I would be minimising our struggle as Black people in this country to think that mainstream theatre is the main problem here. The fundamental problem is white domination and it is systematic and institutionalised. That’s what we need to deal with in post-colonial and post-apartheid South Africa. Even this period of decolonisation sidelines us, because the language, spaces and intuitions in which these dialogues are held favour whiteness. The colonised remains on the peripheries, even on matters concerning decolonisation! It’s very sad. So perhaps if we implode the system, all those who practice theatre in the dungeons of the townships will rise from the ashes like the phoenix.

Kudu is set in the future, but it’s about a very topical issue of land justice. In the story, the amaXhosa people have taken over the Eastern Cape until one day a Khoi community stake a claim on their land. The work was very powerful and was seen by people from all kinds of backgrounds. What reactions did it provoke?

In the story I was trying to imagine our future as Africans in the absence of white supremacy. Coloured people loved the play so much and so did black people. But obviously there were people who saw the play as counter-revolutionary. They thought the play centralises Africans as colonisers and Khoi as the colonised. Regardless, Kudu shook me as its creator. Many say that it’s a play that satisfies and brings discomfort at the same time.

You’re also the co-founder of the Lingua Franca spoken word movement — a collective of South African poets. Can you tell us a little about what Lingua Franca’s mission is?

Lingua Franca is one of the most potent and prominent spoken word movements in this country. The mission is to centralise our indigenous languages by referencing the ways in which we used to perform poetry. It rejects Western forms of writing and performing by organising workshops and an annual poetry festival: Naked Word Fest. We have five resident poets and four resident musicians. We all hail from Delft in Cape Town.

You’ve spoken before about the importance of talking about what you term “cultural genocide” — where culture is taken from a group of people. It’s a theme that runs through your work, bringing people back to languages, forms and images that resonate with an African audience or readership. Why is it so important for people to have their own histories and languages reflected back to them in art and stories?

When you don’t see what your body and spirit recognises then you lose confidence and start upholding other people as the chosen ones. If we want to return to the original source then we must constantly re-create our cultural images and make ourselves visible.

You’ve had a longstanding relationship with Zabalaza Theatre Festival in Cape Town, where you’ve won several awards. What would you say to encourage up-and-coming artists who might be hesitant about applying to high-profile platforms like Zabalaza to launch their work?

We are not theatremakers if we don’t make theatre. The Zabalaza festival is the impetus to get to where we would like to be as theatremakers because it propels us to think and work in a healthy competitive way. Without the festival there wouldn’t be a body of plays, especially from the peripheries, in Cape Town. The festival might not meet all our needs but I have always advocated for full participation to sharpen our directorial, writing, designing and acting skills. It is a great platform to begin to talk about the politics of space and exclusion.

You work a lot with storytelling modes that don’t leave a permanent record: spoken word poetry or theatremaking takes its power in the moment but it’s hard to capture and sell over a longer term. Is there a challenge to working with stories when they’re not written or published, or is that part of the magic you enjoy?

This notion of not archiving our work is just another form of erasing ourselves. Lingua Franca has done many things, but we do not have them on record. I have started developing a culture of always returning to my work to collect whatever I can. I feel privileged and honoured that Kudu is published by Robin Malan of Junkets Press because it will stay with me forever.

Where can we catch you and your work next?

I am currently pursuing my honours in playwriting at UCT. So, this year is a bit quiet for me but I just conceptualised and wrote a big project: Life Esidimeni: The Irony with Bulelani Mabutyana and it toured around Cape Town. It is coming back soon and it also will show at Market Theatre. In South Africa, towards the end of the year, I am planning to re-stage Ingqanga (a theatre piece) and my solo performance Purpose.