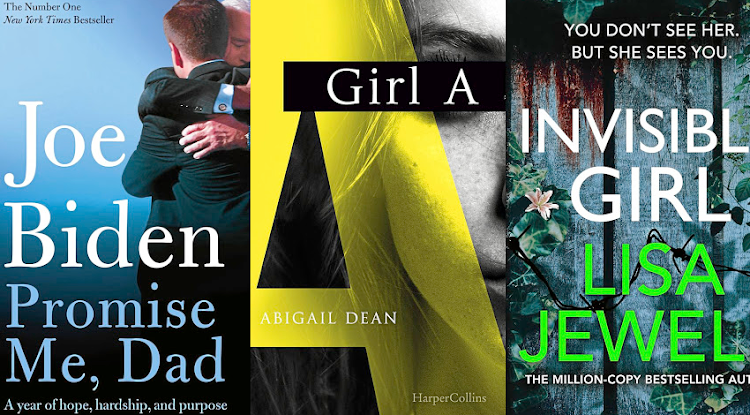 Joe Biden's very human story about carrying on as you grieve, a sharp, perceptive and powerful novel drawing on true crime events, and a beautifully written psychological thriller.
Image: Supplied

The US's new president opens up about his "year of hope, hardship, and purpose". Joe Biden was familiar with tragedy after his daughter and first wife died nearly 50 years ago. But in his final years of being vice-president, he watched as his rising-star son, Beau, died from an aggressive brain cancer. Yes, there are politics laced in this tale, and perhaps they are not your cup of tea. But, in the end, this is a very human story about living and carrying on as you grieve. Tiah Beautement @ms_tiahmarie

Dean was inspired by true crime events, especially the case of David and Louise Turpin, the Californian couple who tortured and abused 12 of their 13 children. The main character is Lex - Girl A - who was 15 years old when she wrestled out of her chains, threw herself out of the window, and subsequently rescued herself and her siblings from their parents and their house of horrors. But this is not about the abuse and the years she lived chained to a bed and starved, this is about what happens afterwards. How are they coping as adults? Sharp, perceptive and powerful. Jennifer Platt @jenniferdplatt

Teenager Saffyre has always been an outsider. Her happiness was shattered at the age of 10 when she was sexually assaulted by an older boy. She begins therapy with psychologist Roan who she feels understands her but he ends their therapy before she can reveal her darkest secret, leaving her feeling abandoned. Saffyre starts following Roan and discovers he's having an affair, deepening her contempt for him. She becomes obsessed with him and spends nights camped out in a vacant lot across the road from his house. Then she disappears. This beautifully written psychological thriller about the interconnectedness of disparate lives is suspenseful and riveting. Gabriella Bekes

A poetic and dreamy literary read, a tour de force of a novel about love and loss, and a dark and twisty thriller from Claire Askew.
Books
5 months ago

The latest Mitch Rapp novel, Louis de Bernières's remarkable 'The Autumn of the Ace', and a domestic noir in which a book club is more than it seems.
Books
6 months ago