Who kills elephants and why? Who shows compassion towards them, and in what ways and why? Pity, sympathy and empathy all have a role to play but Wylie contends it is compassion that leads to “a stronger call to action-in-the-world 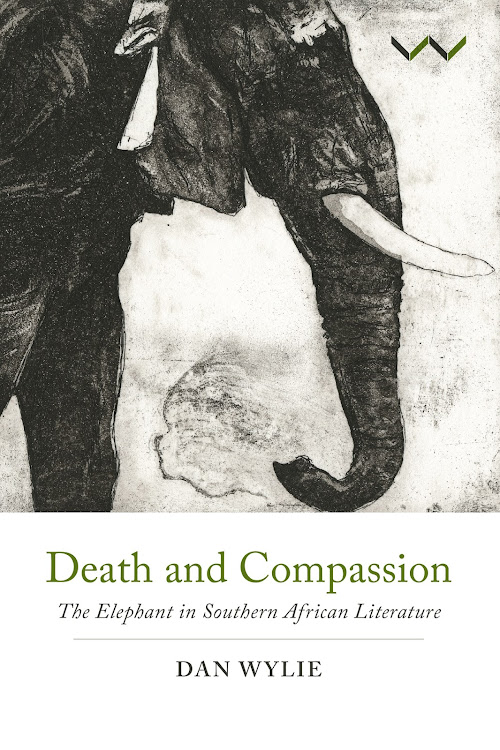 “Elephants are in dire straits – again.”

- Dan Wylie, at the outset of his innovative and intellectually exciting study, Death and Compassion: The Elephant in Southern African Literature.

Lecturer in the English Department at Rhodes University, Grahamstown, Wylie has published several volumes of poetry, a memoir Dead Leaves: Two Years in the Rhodesian War, Savage Delight: White Myths of Shaka and Myth of Iron: Shaka in History which he dubbed an “anti-biography.

“There’s not really enough information to put together a full picture of the real person.”

So, in the course of a 600-page-plus master-class in biographical deconstruction, King Shaka, indlovu, the Great Elephant, gradually disappears.

Rather like his namesake, Loxodonta Africana, all but wiped out in most of Africa by European hunters during the 18th and 19th centuries with a brief resurgence in numbers during the twentieth, “in the heyday of late colonial conservation efforts.” Currently an estimated precolonial population of 26 million elephants “now staggers at less than half a million – and is dropping at a terrifying pace.”

Saving the elephant from extinction should be a no brainer. They have the traits - “high intelligence, rich emotional lives, capacity for mourning, caring matriarchal social structures” – that tick all the boxes for compassionate protection.

Who kills elephants and why? Who shows compassion towards them?

So why is it people feel and behave so differently towards them? Why does Wylie grieve at the death of an elephant whereas his friend has no compunction in killing them?

A question which finds Wylie examining our literature in southern Africa to see what it tells us about human relations with elephants in a variety of genres including oral traditions, travelogues, hunting memoirs, novels, game-ranger memoirs, science-based accounts and poetry.

Who kills elephants and why? Who shows compassion towards them, and in what ways and why? Pity, sympathy and empathy all have a role to play but Wylie contends it is compassion that leads to “a stronger call to action-in-the-world … compassion, crucially and by definition, is intended to benefit the animal.”

Whether premodern people exhibited compassion towards elephants is difficult to know. In the oral tradition the elephant sometimes appears as “an icon of fearful dominance”, segueing into the praise names of Zulu kings. And if an elephant is killed there are qualms about eating its flesh - too close to human. A telling though not exactly compassionate conflation.

Nineteenth travellers’ tales blend adventure, scenery and slaughter; sometimes in the service of zoology. For example, Francois Le Vaillant spent half-an-hour in the 1790s studying four elephants and, having “sufficiently observed their feeding method, I shot the one nearest to me in the head and in less than ten minutes did the same with the other three.”

Wylie acknowledges finding the hunting literature repellent. Easy enough to understand the skill and thrill of the stalk but why “the triumphalism of the kill itself; the necessity of a death?” A question without an answer. Hunters’ accounts “repeatedly shut down at the crucial moment.”

The literature from William Cornwallis-Harris to F.C. Selous and beyond is typified by a “laconic, self-deprecating style” that “deliberately eschews emotionality.” There are expressions of pity and awe when faced with the prey, but such feelings are “instantly snuffed out” at the final moment. R.G. Gordon-Cumming’s account from Five Years of a Hunter’s Life in the Far Interior of South Africa (1850) can stand as grim witness: Gordon-Cumming has shot and severely wounded an elephant which now stands leaning against a tree.

Instead of putting the animal out its misery he lights a fire, boils some water and sits “coolly sipping my coffee, with one of the finest elephants in Africa awaiting my pleasure beside a neighbouring tree.” Having “admired the elephant for a considerable time” he then “experiments for vulnerable points” firing “several bullets at different parts of his enormous skull.”

Gordon-Cumming is then “surprised and shocked to find that I was only tormenting and prolonging the sufferings of the noble beast.” He finally dispatches the animal with six shots from his “two-grooved” and three from his “Dutch six-pounder”.

Hunting accounts of this period (and later) do not “bring us much closer to explain why some men enjoy killing elephants, let alone whether it is moral; their whole raison d’etre is to close off even thinking about motive and culpability.”

If non-fiction writers are reticent about their motivations for killing elephants maybe an answer can be found in the novel, a “primary medium for the exploration of emotional inwardness and human emotions.” Step forward the likes of H. Rider Haggard, Stuart Cloete and Wilbur Smith.

Haggard borrows the self-deprecatory style of the hunting memoir for his narrator Allan Quatermain in King Solomon’s Mines (1885) which boasts an elephant hunt in the opening chapters thus setting a template for many of the subsequent prequels to King Solomon’s Mines such as The Ivory Child, featuring a near-satanic pachyderm and a visit to the legendary elephants’ graveyard. There’s not much compassion evident, though occasionally there is pity and an awareness of diminishing populations. In later life Haggard gave up blood sports, writing a novella, The Mahatma and the Hare, by way of explanation.

The pitting of man against beast – usually a big tusker – in a duel to the death is a common motif and one driving Stuart Cloete’s The Curve and the Tusk (1953) but here, for the first time, “the novelist gives as much space to the ‘biography’ of the elephant protagonist as to his human counterparts.” Wilbur Smith’s Elephant Song (1991) echoes Cloete’s attempt to enter the mind of an elephant and there is a dutiful nod to ecology, otherwise “little more than a pretext for a very conventional helter-skelter thriller of manifold violence and cardboard villains.”

In contrast fiction for the young has been “much more adventurous, unabashedly courting the empiricist’s devil of anthropomorphism” and willing to allow the elephant a voice. In The Elephant (1917) by Agnes Herbert, though a hunter herself, authorial sympathies move beyond hunting and ultimately lie with the elephant.

Over time the hunter is gradually displaced as hero by the conservationist or, indeed, the elephant itself, as in Howard Blight’s An Elephant Bloodline (2007) while Lauren St John’s adventure, The Elephant's Tale (2009), boasts a female protagonist and is informed by an awareness that “some such manner of empathetic engagement is necessary to saving not only the elephants, but ourselves as well.”

The game ranger memoir genre follows a similar arc of hunter turned conservationist. In Memories of a Game Ranger (1948) Henry Wolhuter notes of his appointment as warden of Kruger: “hence forth I was to protect game, instead of hunting it.” More recent memoirs reflect concerns about elephant overpopulation and culling plus the move from “fortress conservation” – animals inside, humans outside (often forcibly removed) - to more interactive human/elephant strategies.

Of a different order are what Wylie styles the “field research memoir”, accounts written in the main by scientists, such as The Elephant’s Secret Sense (2007) by Caitlin O’Connell. In her scientific publications O’Connell rigorously avoids observations about elephants’ emotional states but uses the breathing space allowed by the memoir form to release “her emotional and imaginative concord” to convincing effect.

Similarly Lawrence Anthony’s The Elephant Whisperer (2009; written with Graham Spence), more “expert” than scientist and more popular in style but like O’Connell dealing with elephant communication and their interaction with humans “embroiled in the tortuous politics of southern African conservation.”

Standing alone, now apparently literally, is the lone elephant of the Knysna forests.

Last elephant standing at the end of a sad tale of habitat loss and slaughter in which P.J. Pretorius, author of Jungle Man: The Autobiography of Major P.J. Pretorius (1947) is cast in the role of main villain and convincingly convicted as such in Lyall Watson’s Elephantoms (2003), a mix of memoir and myth which despite stretching “credulity to breaking point” is nevertheless an informative and thought-provoking read.

The prize for unromanticised compassion goes to Circles in a Forest

But the prize for unromanticised compassion undoubtedly goes to Dalene Matthee’s Circles in a Forest who successfully integrates the themes of her novel with ecological ideas while recognising “that the imagination has a crucial role to play in our relations with the natural world.” A novel simultaneously clear-eyed and elegiac.

“Poetry is the medium of the elegy,” says Wylie, holding “a special place and role in expressing empathy and compassion.” The role of poets in the new millennium according to Jonathan Bate in The Song of the Earth is to “remind the next few generations that it is we who have the power to determine whether the earth will sing or be silent.”

Song or silence? Death or compassion? Reviewing the human/elephant relationship found in our literature Wylie discovers a “heartening historical trajectory, from dispassionate slaughter of elephants to compassionate fellow feeling” but he doubts this is the “dominant trajectory” on a global scale.

Given what seems “an inexorable vortex of crazed consumption” extinction cannot be ruled out. “It remains possible that elephants, like dodos and quaggas, may become mere fossil-like words.” Poems about elephants may replace the real animal and “human representations might one day be all that remains of nature.”