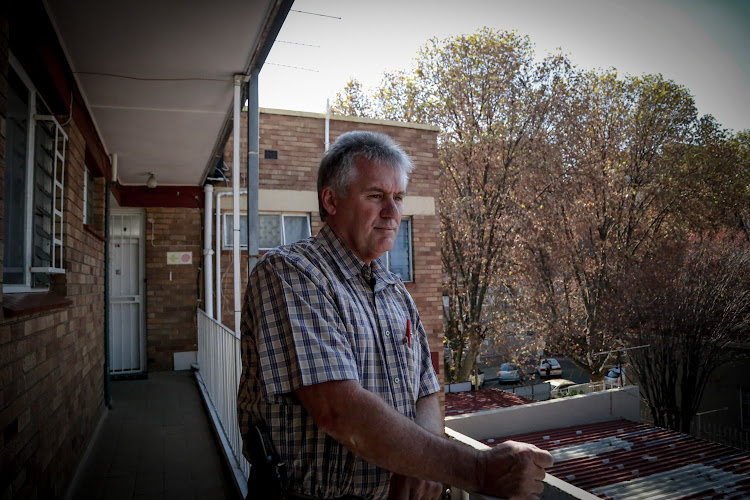 Investigating officer Capt Ben Booysen at the block of flats in Krugersdorp where neighbours Cecilia and Marinda Steyn plotted with family and friends to murder 11 people.
Image: Sebabatso Mosamo/TimesLIVE

“Nicki and Ben, you are f*kken amazing.”

The orator of this commendatory statement? Melinda Ferguson.

The recipients of this commendatory statement? Our (very own) Nicki Gules and Ben “Bliksem” Booysen.

The occasion which necessitated the uttering of this commendatory statement? The Exclusive Books Rosebank launch of Booysen’s memoir-cum-account of tracking down the Krugersdorp killers, ghostwritten by Gules.

On the Devil’s Trail: How I hunted down the Krugersdorp Killers, published by Melinda Ferguson Books, follows Booysen’s investigation into the murders committed in the West Rand mining town, interspersed with anecdotes about the detective par excellence’s bleak past. (The son of a miner, Booysen was raised in grim myn dorpies in a household devoid of parental affection).

“As seen in Devilsdorp” is prominently displayed on the cover, together with a photograph of six names synonymous with the murders of 11 people between 2012 and 2016, “in the name of Satanism”: Cecilia Steyn, Zak Valentine, Marinda Steyn, John Barnard, Marcel Steyn and Le Roux Steyn.

Long-term Krugersdorp resident Booysen took on the case of the brutal murders committed by the cult Electus per Deus (Chosen by God), arresting mastermind Cecilia in 2016. 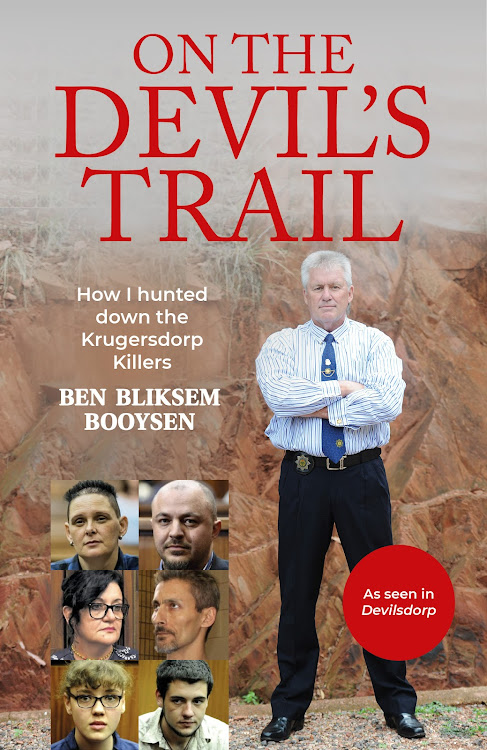 'On The Devil's Trail: How I Hunted Down the Krugersdorp Killers' by Ben Bliksem Booysen.
Image: Supplied

Booysen aside, Gules also spent time in Krugersdorp, with discussant Deon Wiggett, writer and narrator of My Only Story (asked by Ferguson to moderate the conversation “because he’s tweetalig”), opening the floor by asking Gules about her impression of the town.

She describes it as a “rof place” during her time in a school hostel (“I smoked so I could get expelled”), yet acknowledges meeting her best friend and Booysen as redeeming factors of the West Rand myndorp.

As for Booysen’s first impression of Gules?

When he heard a Sunday Times employee was tasked with ghostwriting his story, his first thought was “O vet, ek hoop hierdie vrou kan Afrikaans praat, want my Engels is baie moeilik.” [Oh gosh, I hope this woman can speak Afrikaans because my English is very poor].

Booysen said he’s been approached a number of times to write his story, a task he’s never been keen on as he opines that his life isn’t worthy of a book. (The opening sentence of On the Devil’s Trail reads “This is just an ordinary story”. Oh, the modesty.)

Readers have Ferguson and his wife Christelle to thank for the final product. After a phone call from Ferguson, Christelle said: “Well, go for it. Skryf jou storie.”

As for his writing process with Gules?

She made him feel at ease, Booysen responded, adding that what he found most interesting during their discussions was whenever her husband (a Turk) would call and he’d listen to Gules chattering away in a language as foreign to Booysen as the word entjie is to Vaalies.

“Praat hulle oor my?” he quipped.

“The most intimidating thing about going to Ben’s house was his driveway,” Gules interjected.

“Ben had to reverse my car down that driveway every Monday.

“The most incredible thing about Ben is how generous he is with his time,” she continued  once the laughter has died down.

“It’s very strange because we are very different people. But there is a happy rapport between us. We sat in his lounge and spoke for hours. The first day was three-and-a-half hours.

“Ben is such a meticulous investigator,” Gules continued.

“He kept the records, he kept the dockets, every little bit of paperwork that made my job so much easier because then I could back up everything he was saying.

“The challenge with this book was :‘Where’s the news here?’,” Gules stressed.

“Why would people buy this book if there’s a whole Devilsdorp documentary on TV? What are we giving the reader that is new?’ It’s because of Ben’s meticulous record-keeping that we have a lot of new stuff.

“If ever there was a person to consult, this is the guy,” Gules nodded towards Booysen.

His record-keeping acumen aside, Booysen delivered an equally detailed homage to his wife Christelle, who he married in 1994.

Wiggett observed that Christelle is mentioned on page two of Booysen’s book: “I have lived in Krugersdorp for most of my adult life. It is the place where I met my wife and my rock, Christelle — a f**king good cop and the love of my life — and where my four children were born.”

“For the sake of your marriage,” Wigget said, he gave Booysen 90-seconds to share a love letter to Christelle with the audience.

“Um, at this stage she brings in the money,” the captain sheepishly smiled.

“And she’s got a gun, so,” (The laughter this statement elicited unfortunately drowned out Booysen’s follow-up words, yet “to watch myself” remained audible. The detective is a bliksemse riot.)

Wiggett was curious about how Gules, as an investigative journalist, found the process of ghostwriting a memoir. (Her response also lauds Booysen’s formidable better half.)

“It is a very different process,” Gules responded, “but it was also nice not having a cop fight with me for once. I have my own love letter to Christelle. Christelle is awesome and Ben describes her as ‘his external hard drive’. And she is. Christelle knows where all the bodies are buried,” she added, much to the audience’s amusement.

“She knows everything,” Gules emphasised.

“She was there at every single juncture of that story.

“Christelle is a very senior police officer herself and she’s worked everything from detectives to visible policing.

“It’s interesting how we as investigative journalists rely on documents,” she said before reiterating her job was made easier by Booysen’s fastidious record-keeping.

“Ben has everything written down. You should see this man’s investigative notebooks,” Gules said.

“The previous investigative. With the 2012 murders. Oh my God. I have never read handwriting like that in my life. I tried. I had to get first language Afrikaans speakers to help me because I can’t read crap handwriting in a language I can’t speak.

Accurate verbal evidence, ultimately, relies on honest testimonies of witnesses, with Wiggett asking Booysen how one goes about juggling a witness’ decision to either co-operate or refuse to testify.

“The problem is, you can force somebody to testify but then you’ve got somebody who doesn’t want to do it,” Booysen responded.

“And usually when you force somebody to testify, they will stop.

“There were a lot of people involved in the Krugersdorp murders we investigated but at the end of the day we didn’t use them to testify in court. We had one last sitting with them and I saw that if I use this person as a witness it will damage my case.

“Through my entire police career I never forced a witness to testify.

“I also never tell a witness what to say, and when I take witness statements all the people must not be in the same room. I take one, one, one, one so they don’t hear what the other witnesses are saying because then they start doing that with their statement.

“Eventually when they go to court, ‘I didn’t see it, I just heard about it’.

“I always tell them ‘you only testify what you know and what you saw, nothing else’. If you force people to testify, it’s not worth it. The case is going to go down the drain.

“First, if I need to take a statement from Nicki Gules, as example, I’ll go to her and I’ll ask her ‘you know about this situation’? ‘Yes’, and I’ll give her a piece of paper and say ‘write down what you saw and your side of the situation’. After that I’ll read her statement because when you write stuff, you are more honest."

He further advises against attempting to befriend a witness.

He gestured towards his present case study, Gules: “She’s harregat. So if I take her statement, I’m going to be harregat with her.”

The opposite also rings true, with Booysen mentioning how Le Roux Steyn was subjected to assault by the police and his mother, Marinda.

“If I go into a conversation with him and I’m harregat, it’s not going to work because he’s used to this stuff. I need to be calm and rustig and put my Ben Bliksem manners aside.”

His question about cross-examination sufficiently answered, Wiggett asked Booysen to sketch an image of what it’s like sitting in front of Cecilia.

“She makes jokes about everything. When they arrested her, when the police took photos of her she was doing bunny ears, stuff like that. She’s a clown and she is not what she is with Marinda and the children and other people she bullshitted. Sy kom voor as ’n baie sagte mens wat maklik mee omgaanbaar is.” [She comes across as a soft and personable person].

Her childish antics aside, Booysen also experienced the meanness and cruelty of which she is capable.

“I was taking a statement on a charge of conspiracy to commit fraud,” he explained.

“I was sitting there. It was a Saturday morning and in the morning I’m not that bright. I asked my wife ‘how do you spell ‘conspiracy’?

[She is a mean person. When you were in court you’d listen to the fine detail she described about murdering these people. She’ll eventually even tell the judge, ‘Sorry, I have something else to add: When I murdered Mikeila, I took her by the hand when she woke up and said to her ‘You better start praying, because I’m going to kill you’.]

[So while sitting there, listening to her, and seeing the photos, you being to realise what a cruel person she is. Her and Zak Valentine both. When Zak murdered the Meyers, he stabbed Mr Meyer before stabbing his wife. Mr Meyer began reciting Psalm 23 and Zak went completely crazy. He started stabbing them in their heads, necks, chests. It’s as if they got a kick from the way they murdered people.]

[But Cecilia, other than having a couple of screws loose, is actually just a pathetic person.]

Wiggett diverted the conversation to the topic of the occult (“which you’re quite sceptical about,” he nodded to Booysen) and Satanism.

He said members of the Church of Satanism aren’t brutal Satanists.

“You get brutal Satanists who make women pregnant, jump on them to get the foetus out, eat the foetus. We’ve investigated some of those cases in Krugersdorp.

“Cecilia, she was since grade two busy with Satanism. In standard seven, for the last time, she was suspended from the last school she could have been in. After that none of the schools wanted her.

“She was the whole time busy with Satanism but I don’t think she was a real Satanist. I’ve got a whole marriage thing that I presented in court which said she was married to the devil.

“The thing she did at the end of the day, she converts them to kill people because God said these people must be killed.

“It was not Satanist. Cecilia used that to convince them to kill.”

‘On the Devil’s Trail’ is written by Ben Booysen, a policeman who worked on Krugersdorp Killers’ case, and Nicki Gules
News
3 weeks ago

On the Devil's Trail | How I hunted down the Krugersdorp killers

The killing spree started in 2012. Eleven people had been brutally murdered by a group calling themselves Electus per Deus, but four years later no ...
Opinion & Analysis
3 weeks ago

'I am working for the public, not the money': Cop who bust Krugersdorp serial killers