Malema calls in a favour to visit Italy 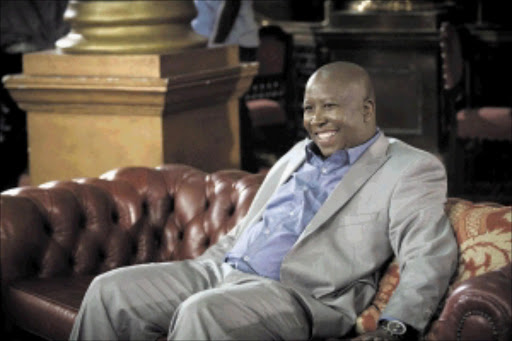 Julius Malema, one of the politicians featured in an eight-part documentary series with young people from across the continent, which airs next month
Image: NADINE HUTTON

Julius Malema has been helped to circumvent stringent visa requirements and go on holiday in Italy.

The ANC Youth League president was told he would have to wait 10 working days for his visa to be processed - so he called in a favour from SA's ambassador to Italy, Thenjiwe Mtintso.

Malema's holiday coincided with an official visit to Italy by a Limpopo provincial delegation, led by his friend and premier Cassel Mathale.

Malema went to Milan with another friend from the province, the head of Limpopo's housing department Clifford Motsepe - who is also an SABC board member.

Questions are being asked about the timing of Malema's trip, which coincided with a visit by Mathale and 26 other Limpopo politicians, government officials and businessmen . The Limpopo delegation, which is expected back today , was out to attract Italian investors .

Ambassador Mtintso, who is also a member of the ANC's national executive committee, confirmed that she was approached by Malema last month. He wanted to visit Italy immediately after the conclusion of the youth league's national conference.

Mtintso asked him when he wanted to come to Italy, "and he said: 'Next week.'"

She said she told him: "You know that it is going to take you 10 working days to get a visa and he said: 'Yes I have gone to the Italians and they said the only way I can get a visa so quickly is if I can get an invite from yourself as an ambassador.' "

She said Malema's invitation was one of many she had issued and that there was nothing untoward about it.

"I know Malema. He wants an invite and he is not the first one. He is probably the 30th person I have invited. Some of them I don't even know."

Youth league spokesman Magdalene Moonsamy said : "It was a personal trip and he is entitled to his personal space. He is committed and doing so many things that we don't even want to interrupt him during this time."