Rock 'n roll in the ruins 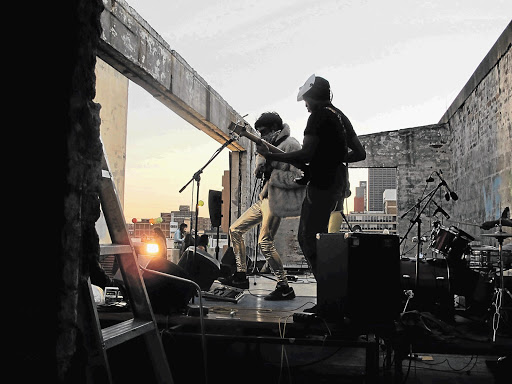 Johannesburg's urban landscape is constantly shape-shifting in structure and development. Many buildings lie lifeless in a transitional phase before being injected with design and artistic integrity to become office spaces, studios or retail spaces.

Examples of this regeneration are Main Street Life and Arts on Main, in what is known as the Maboneng Precinct in downtown Johannesburg.

In 2008, developer Jonathan Liebmann purchased the old DF Corlett Construction offices and warehouses between Fox Street and Main Street and worked with architect Enrico Daffonchio on converting the buildings into a space which now functions as a mecca for artists, musicians and advertising agencies.

During the ongoing development of the Precinct, buildings are utilised at every stage of their transformation , giving them an iconic status even before completion.

Revolution House, one of the buildings undergoing a facelift, has played host to networking evenings for future tenants, international graffiti exhibitions and music exposés, all during its reconstruction phase.

However, this year has seen the introduction of the Precinct's most experimental event to date - Invisible Cities.

A year-long festival of monthly events set in the area's vacant buildings, Invisible Cities is an experiential collaboration which marries architecture, art and music in celebration of Johannesburg's mercurial vista.

The project is the brainchild of João Orecchia, an artist and musician whose focus is on experimental sound and its effect on audience perception.

Orecchia's ties to Arts on Main date back to its infancy stages of development in terms of raising awareness of the space through his musical contribution.

"There's a lot of talk about what Johannesburg is, what it was and what it is becoming. It is a city in eternal transition," says Orecchia.

"This is a privilege for us, the people who call it ours. We can make Johannesburg whatever we want it to be. The city is here, asking us to shape it.

"While some look to European cities and envy their long-established routines, venues and structures in the arts, there are those of us who see the blank canvas and embrace it. We see what we want our city to be, we see its place in the world, and we see the importance of our contributions.

"We have a dream and we want to make it reality."

To realise this snapshot of Johannesburg in flux, Orecchia called on designers Jana Hamman and Koos Groenewald to assist him in giving the project depth and dimension.

"When João explained his vision of Johannesburg in a raw space where people could experience the area's fluid nature with music performances as a starting point, we had the idea of using images of musical instruments in manipulated states to support the theme of the building's metamorphosis," says Hamman, who is one half of Jana+Koos CreativeColab.

"The first image we used was of a burning piano that we shot on the roof of Revolution House, where the initial Invisible Cities was held.

"Each event is represented by a deconstructed instrument, which is symbolic of the architectural transformation of the space. The installations are primarily dictated by the space, which determines the theme. They're done off-the-cuff and on a shoestring budget, which makes every event unique."

Invisible Cities has put on three events to date, all held in empty buildings that are no longer what they were. Rooftops, hallways, stairwells and facades are transformed into a freeze-frame of a possible Johannesburg.