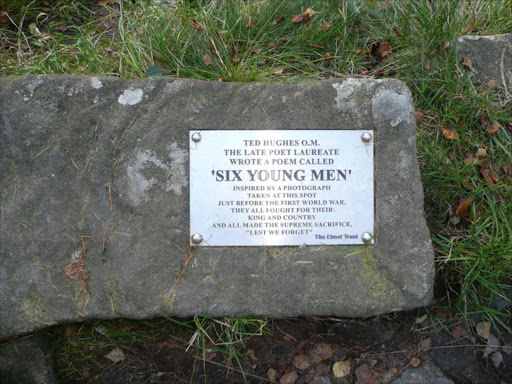 It may seem like a long 13 years after his death that Ted Hughes was honoured in Poets’ Corner at Westminster Abbey, but compared with other literary greats like Shakespeare and Byron, the wait was relatively short.

A service will be held on Tuesday to unveil the memorial stone, which features an extract from his poem That Morning:

Byron, whose lifestyle caused a scandal though his poetry was much admired, died in 1824 but was only given a memorial at the famous site in 1969.

Even Shakespeare, buried at Stratford-upon-Avon in 1616, had to wait until 1740 before a monument appeared in Poets’ Corner.

At Tuesday’s ceremony, fellow poet and Nobel Laureate Seamus Heaney will give an address, and six of Hughes’ poems will be read, three by actress Juliet Stevenson and three by Heaney.

Worshippers will also hear an extract from a letter Hughes wrote to his then wife, the American poet Sylvia Plath, in 1956, shortly after they married and seven years before she took her own life, aged 30.

Hughes’ legacy has always been closely intertwined with Plath’s, with his part in their relationship a source of widespread criticism.

Edward Hughes was born in 1930 in Yorkshire, northern England and decided on a career as a poet when he was in his teens.

He met and married Plath in 1956 and the following year published The Hawk in the Rain, still considered one of his best and most important collections.

When Plath committed suicide, some feminists blamed a devastated Hughes, who had started an affair with another woman, Assia Wevill, the year before.

That was not the end of the tragedy – Wevill killed herself and her four-year-old daughter in 1969, leaving Hughes unable to complete a collection of verse entitled Crow.

In 1970, he published a selection of poems under the title Crow: From the Life and Songs of the Crow, and the same year married Carol Orchard with whom he remained until his death.

He was appointed British poet laureate in 1984, and in 1998, shortly before his death, published “Birthday Letters,” considered his clearest response to Plath’s death 35 years earlier. It became a bestseller and scooped several top prizes.

Westminster Abbey said his memorial lies at the foot of that to TS Eliot, Hughes’ “hero and champion”.