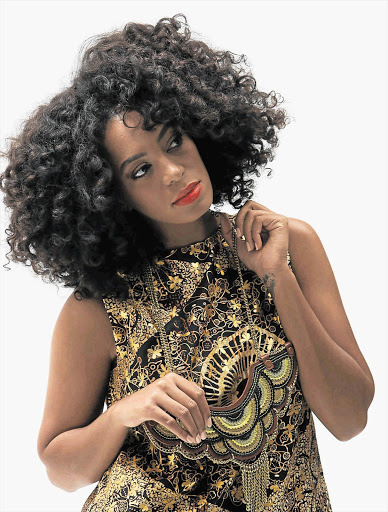 Solange Knowles, American songbird and sibling to one of the most famous entertainers in the world, slipped into South Africa this week for a glossy magazine cover shoot - and to film the video for her latest single Losing You.

The 26-year-old is the younger sister of global singing and acting superstar Beyoncé.

The video for her single will be shot "documentary style" in and around Cape Town and will be released around the world next month while she will also grace the cover of South Africa's Elle magazine in November.

Knowles previously visited Cape Town in 2003 with Beyoncé, who performed at the 46664 concert hosted by Nelson Mandela.

In an exclusive interview with the Sunday Times during Friday's fashion shoot, Knowles raved about Cape Town saying she loved visiting the city.

Organisers of the shoot stressed that she was not keen on speaking of her famous family.

She said: "I came to Cape Town for the concert with my sister nine years ago. In just under a decade it has changed so much. From what I have experienced it is such a diverse city. I love the arts and the creativity here, also the element of youthfulness."

She said she tried to live a normal life when the cameras stopped rolling.

"I'm a very, very low-key kind of person, I just want to lead a chilled and normal life. Even in New York I prefer just riding my bike everywhere."

Knowles was chatting in a dressing room at Roodebloem Studios while having her hair groomed for the magazine shoot. Wrapped in a canary yellow dress, her flawless complexion glowed in the mirror. "Aesthetically, colour has always been the most important thing to me," she said.

The singer described her upcoming single as "eclectic with '80s references and African percussion influences".

"So the locations for my video will largely be inspired by the colour in the architecture and townships around here. We'll just take a camera and see what happens."

Knowles said her music video would be filmed like a "stylised documentary" at locations around the city. The song is from her third studio album recorded with British producer, Dev Hynes, who has previously collaborated with Florence and the Machine and The Chemical Brothers.

Knowles lives in Brooklyn, New York, and was accompanied by her fashion designer mother, Tina.

Tina rose to prominence as a designer after creating outfits for Beyoncé when she started out with the girl group Destiny's Child.

Tina and Beyoncé went on to launch the famous House of Deréon fashion line which, among others, has featured on The Oprah Winfrey Show.

For the shoot on Friday, Knowles selected clothes by local designers including pieces by Cape Town-based Gavin Rajah and bright prints by Loin Cloth & Ashes, founded by Anisa Mpungwe from Johannesburg.

Mpungwe flew in to Cape Town to meet Knowles . She said: "I have to be honest with you, I am still numb . I first spoke to Solange two years ago when I had a show at New York Fashion Week. And here she is, in SA, actually rocking my stuff. I'm super stoked."

Knowles complimented Mpungwe's bright designs: "Her authentic African colours, prints and textures are used in such a beautiful way, tailored and contemporary. This is naturally my style and I immediately gravitated towards these designs."

"Also, Solange's hair is very much part of her aesthetic vernacular. She wears her hair naturally which resonates with many of our readers."

"The fantastic thing is that they collaborate with South African media and designers [which is] a huge boost for the industry."

Knowles arrived in Cape Town on Wednesday and reportedly hit the city's shopping districts on Thursday.

She said she was looking forward to visiting some local attractions including Woodstock restaurant The Kitchen before leaving on Tuesday.

Knowles married rapper Daniel Smith in 2004 when she was 17 and gave birth to their son, Daniel Julez Smith, that year.

The couple have since split.

Two years ago she was selected to represent cosmetics brand Rimmel, alongside actress Zooey Deschanel. She recently signed on as the face of clothing brand Madewell, following in the footsteps of British model and TV personality Alexa Chung.