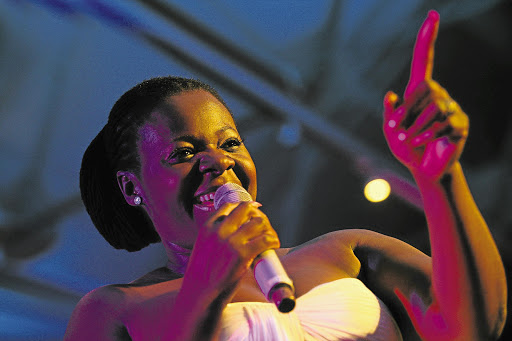 The jazz star on opening up to her mother, Mandela's hug and living with Brenda Fassie

Brought up by a mother she describes as a disciplinarian, Sephuma has practised her agile and seemingly effortless vocals since she was a child. As a teenager, she was briefly mentored by pop icon Brenda Fassie and later studied jazz vocals at the University of Cape Town, where she graduated with an honours degree in jazz performance in 1997.

Four years later, she impressed South African audiences with A Cry, a Smile, a Dance, her acclaimed debut album, which was followed by four more, plus performances with music greats such as Sibongile Khumalo and Michael Bolton.

Raised in the Pedi culture, Sephuma - who is also becoming known for her evangelical music - launched her first live-in-concert gospel DVD, The Experience, last month. She shares her Observatory, Joburg, home with her husband, photographer Siphiwe Mhlambi, children and three dogs.

The proudest moment in my career was getting a hug from Madiba. From that day onwards, he never forgot my name. Whenever I saw him, he'd pick me out in the crowd and ask . "Is that Judith?"

I grew up during conservative times. It wasn't easy to open up to my mother about certain things. I thought, for instance, it would be a problem to tell her about my period or even having a boyfriend. Things began making sense when I grew up and I started discovering life. My kids can talk to me about anything.

I was 16 when my father died. I was a big kid, so when he passed on, we buried him and that was it. I didn't allow it to have any negative effect on me. We were raised to let go.

Anything makes me laugh. I'll find the humour in things other people don't find funny and end up laughing by myself.

I don't like listening to myself. But the only thing I've been listening to recently is my latest recording, The Experience. It's been stuck in the CD player for about a month and I can't seem to get it out. It's either that or nothing.

Brenda Fassie was one of those artists you always heard on radio and could only dream of meeting. One afternoon I snuck away from home to see her at a local roadshow. I even snuck past security and made it all the way to the kombi where she was sitting. I told her I could sing and she laughed and asked me to sing something. She was so impressed that she invited me to perform with her that night . in front of 12000 people. I was a star from that moment on. My face was all over the papers when I went back to school on Monday morning.

You never get to the point where you are "made" and have all the answers. Even the biggest stars still strive to be looked at in a certain way. You have to work at your career daily.

I'd love to travel and break into new markets, like Nigeria. There are a lot of huge churches over there . but I keep procrastinating. I guess it's the fear of the unknown.

I have always been able to sing. As a child, I was always making noises, grabbing every opportunity I could find.

When you're feeling sick, it's important to put your foot down and say no to things, respectfully. To rest when you're tired. You cannot perform when there's no "you". But it does take time and maturity to learn how to draw your boundaries.

Living with Brenda as a 14-year-old was an eye-opener. It was a make-or-break moment in my life. If I had made certain decisions, I would not be where I am today. There were a lot of riots in Polokwane then, which is why she invited me to live with her in her Joburg home. I spent a month there, but I didn't stay in touch after I decided I wanted to go home to my mother. [Living with her] taught me to make choices for myself - that I don't have to do things because other people are doing them.

I had always emulated Brenda but when I went home, I decided there would be a Judith Sephuma, and I never looked back.