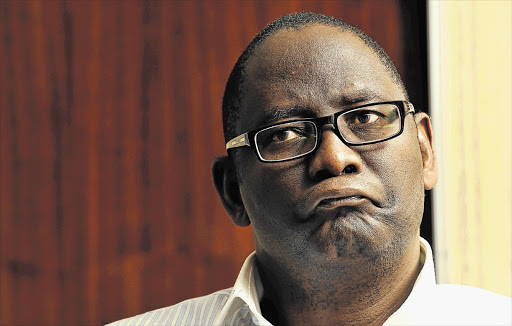 The Congress of South African Trade unions wants its suspended general secretary, Zwelinzima Vavi, fired for spending more than R35000 of the union federation's money on flying his wife and ex-wife around South Africa - and for booking a massage for himself.

These are some of the charges that will form part of Vavi's disciplinary hearing to be heard on a date yet to be decided.

The trade unionist faces a total of nine charges, including having a relationship with a junior employee, employing the woman without following proper procedures, and defying the federation by breaching his suspension conditions.

He is also accused of not taking action against the same employee, despite complaints that her incompetence had resulted in Cosatu failing to account for R1.2-million in travel expenses.

Vavi's 33-page charge sheet - handed to him this week - reveals that a Cosatu credit card was used on several occasions to pay for flights and accommodation for his family.

His wife Noluthando's flight from Johannesburg to Cape Town on March 28 2012 to attend the Cape Town Jazz festival. It cost the federation R7180;

A four-day stay for Vavi and his wife at a boutique hotel while attending the festival cost R14128;

On April 1, Noluthando's flight from Cape Town to Kimberley and back to Johannesburg on the same day cost R2145;

A R4128 return flight for Noluthando from Johannesburg to East London on May 11 2012;

On May 31 2012, Noluthando flew to Cape Town and back to Johannesburg. The flight cost Cosatu R1960;

On July 9 2012, return flights were booked for Vavi's ex-wife, Nikiwe, and son Aphelele from Johannesburg to Durban. They cost R1726 and R1555 respectively; and

Vavi paid for the services of a "body therapist" at a hotel in Braamfontein. It cost Cosatu R1500.

According to the charge sheet, Vavi did not refund the federation as per Cosatu rules.

Vavi yesterday maintained his innocence. He accused his detractors of "subjecting" him to a "media trial" by leaking the charge sheet.

"We are, however, confident that many South Africans will see through this malicious agenda. The basic rule at all times is that the onus and the burden of proof lies with the one making the allegations," he said in a statement.

Yesterday morning, Vavi tweeted: "Leaking charges is gross violation of my rights! It's an attempt to conduct media trial hoping trump up allegations will dent my reputation.

"[I] won't fall in a trap of answering trump up charges on social media - let them bring evidence in a correct forum."

The federation claims that Vavi failed to inform his deputy, Bheki Ntshalintshali, and other national office bearers about incurring personal expenses on Cosatu's credit card.

This is not the first time Vavi has been accused of abusing a Cosatu credit card. In 2006, then-Cosatu president Willie Madisha launched a probe into allegations that Vavi had used his credit card to entertain Noluthando, his mistress at the time. Vavi escaped disciplinary action by committing to repay the money.

He was suspended last year after an employee accused him of raping her in her office. The complaint was later withdrawn.

However, the federation charged Vavi for bringing Cosatu into disrepute for having an "intimate relationship" with the same employee.

"In doing so you acted in breach of your duty of good faith towards Cosatu as its general secretary and brought the reputation of both the office and of Cosatu as a whole into disrepute."

The charge sheet states that, as Cosatu general secretary, Vavi was supposed to uphold ethical standards. It accuses him of failing to act against the female employee when she did not reconcile travel expenses amounting to R483737 in the 2012 financial year and R778624 last year - despite having received complaints from the federation's accountant. "(The travel expenses) are unaccounted for and in respect of which there are no supporting documents," it states.

Vavi has also been charged for making "derogatory" remarks about Cosatu at its gathering organised by the National Union of Metalworkers of South Africa and on Twitter, and for entering Cosatu offices and making contact with staff without informing Ntshalintshali.

Vavi is also accused of lying on TV show Carte Blanche when he claimed that Cosatu administrative secretary Khanyisile Fakude was present when he interviewed the junior employee he is accused of having an affair with.