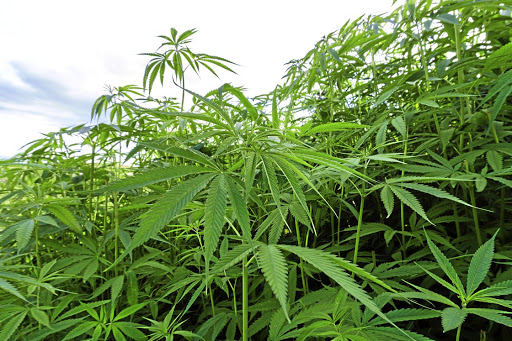 “The first rule of growing weed is: you don't grow weed,” says “Harry”, a pony-tailed 56-year-old in boots, jeans and a heavy jacket worn tight over his wiry frame.

“The problem's not the cops, it's the criminals hijacking your crop,” he says.

“My ex-partner couldn't keep his mouth shut. They put a Glock to my head. Do you know what a f**king Glock is?”

I do. The handgun's defining feature is the absence of a conventional safety catch. There are no stereotypes among the Cape's southern peninsula's dagga growers, but if there were, this guy would make the shortlist.

His dumb phone is at odds with his pay grade and is revered within the dagga farming fraternity as an essential low-tech tool. “They can't track you on this,” he says. “No Facebook. No Google.”

His 16-plant, R40,000 dagga crop of clones, cultivated through intensive 90-day artificial lighting schedules, was snatched on the cusp of harvest. The brush with a Glock was an exceptional event in a dagga-growing career stretching from the early 1990s.

“This is Cheese,” he says, examining the dagga bud at a pizza takeaway and swivelling it in the late morning light to display its bluish hue. It's a rare Cannabis sativa strain, by design heavy on the psychotropic 9-tetrahydrocannabinol (THC) compound desired by boutique recreational clientele. 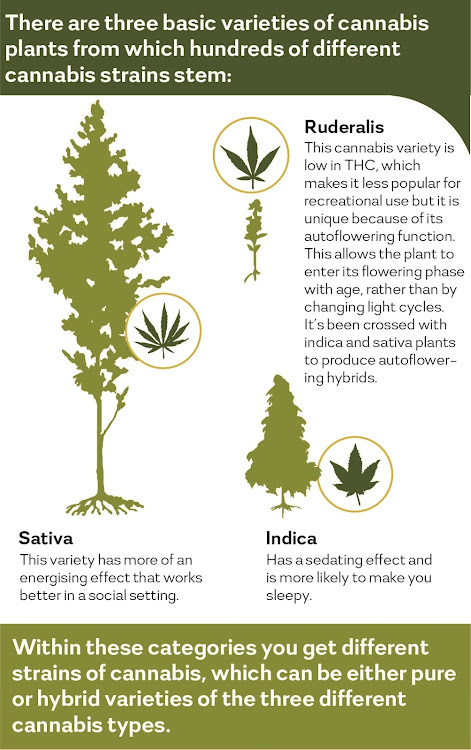 Harry has his first face-to-face meeting with prospective partners at a hotel 60m along the strip to negotiate terms for the supply of Cheese clones for warehouse production at an Mpumalanga operation. He asks me to watch his back.

In another time, the initial impression of the two Afrikaans farmers, each cradling a lager beneath a 1.5m-long Blue Whale mobile in a seaside bar, would have been that they were plain-clothes narcs.

Ten minutes later, Harry strolls back past my table and says: “They're good.”

Against public sentiment, Uruguay broke the global dagga prohibition mindset on Christmas Eve 2013, setting the tone for its “legalisation”.

In October 2018 Canada became the world's largest legally regulated dagga market. By September 18 2020, SA will, if the government meets the Constitutional Court's deadline to amend legislation, assume that mantle.

The South African justice ministry's draft laws reflect Canada's legal stitching for monetising and taxing a plant that grows like a weed in most of the world's climate zones. 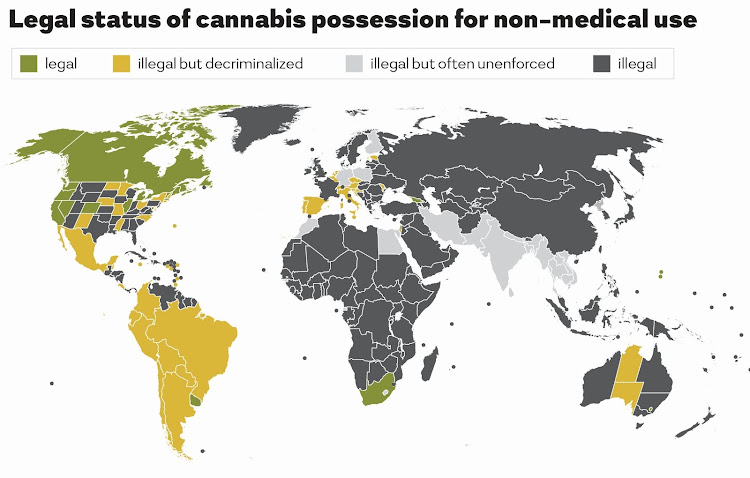 Legal status of cannabis possession for non-medical use around the world.
Image: Rudi Louw

Legal dagga is rationed through state-licensed dispensaries and home-grown cultivation is permitted, but curtailed. SA's draft laws are proposing a legal home-grown ceiling of eight female plants per adult, against Canada's four plants per household.

Canada's financials for its first annual sales for legal non-medical dagga clocked in at $1bn (about R14.9bn). For the same period the sales of the duty-free illicit dagga industry were in the $5bn to $7bn ballpark. Canada's thriving dagga underground is rooted in US men skipping the border in the 1960s to dodge the Vietnam War draft, and while in exile growing and exporting high grade weed to the US.

British Labour MP David Lammy lamented the tenacity of Canada's dagga outlaws on a “look, see, decide” trip to mull decriminalising dope for an uncertain Brexit landscape. In a Guardian article published in 2019 he wrote it “reduces” pressure on police and the criminal justice system, but ultimately sustains an illicit market.

“Production occurs in sterile grow-houses filled to the ceiling with the green plants. Licensed stores, protected by security guards, sell a wide range of cannabis strains in air-conditioned surroundings that appear somewhere between a vape shop and a pharmacy.

“The THC and CBD [cannabidiol] levels are marked on labels like the alcohol content on a bottle of beer. Touch screens allow users to choose between oils, leaf, pre-rolls and pills as easily as picking between a Quarter Pounder or chicken nuggets in McDonald's,” he wrote.

Canada's decriminalisation is a process. It is meticulously rolling out its dagga infrastructure, with two-thirds of Canada's 38-million people serviced by fewer than 50 outlets by its first anniversary.

In SA, the Constitutional Court ruling was an event that the country's dagga underground took at a gallop. It has left President Cyril Ramaphosa's government staring at an open stable door. The absence of parliamentary committee hearings and the hands-off approach adopted in the post-prohibition interregnum by police and health authorities make for an uncluttered playing field for illicit growers.

“Medical dagga is just the extract from the dagga plant,” says “Gandalf”, a retired school science teacher who's manufactured cannabis THC, CBD and trichome oils of 99% purity from his Cape Peninsula home for the past three decades. 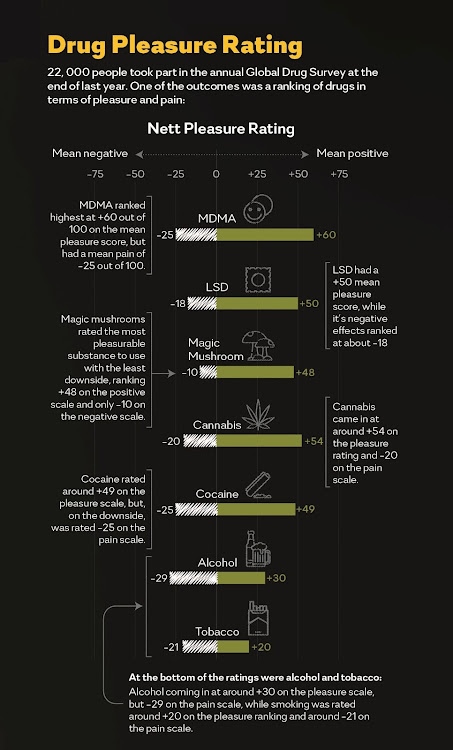 The annual Global Drug Survey resulted in a ranking of drugs in terms of pleasure and pain.
Image: Rudi Louw

Gandalf was seduced by the same complexities perplexing medical science since the recent easing of the plant's prohibited medical research classification.

Yasmin Hurd, a neuroscientist at New York's renowned institute of medical and scientific inquiry, Mount Sinai, resorted to orchestral metaphors to describe CBD's suspected benefits. She told the New York Times last year: “The brain works like a symphony [and CBD can] bring the entire symphony into harmony.”

But, says Gandalf, “there are more than 100, maybe as many as 140 different CBD oils and 30 or 40 different types of waxes [dagga concentrates]. We know very little about this plant. Do you think with all these medical dagga laboratories, cannabis oil is going to become cheaper? Are you that f**king stupid?”

Do you think with all these medical dagga laboratories, cannabis oil is going to become cheaper? Are you that f**king stupid?

There are 5kg or 6kg of dried harvested buds stashed in several stacked and
labelled 2l airtight glass jars in Gandalf's study, and a 15cm block of cold-pressed hashish on his desk. His free-range parrot is squawking to the strains of Irish shanties in an adjacent growing room rigged with banks of artificial lighting for rolling dagga production. The summer months' bump is a 50-odd dagga plantation nurtured in guano-enriched soils on the slopes of a sprawling mountain property.

The biomass required for small-scale artisanal cannabis oil production crosses
into the draft laws' harsh sentencing realm of up to eight years for rearing 12 or more female plants without a licence.

Throttling home-grown horticulture allows governments to issue permits,
costed at millions, for privileged access by corporations to the medical dagga market valued in the billions of dollars.

Gandalf deflects inquiries about looming decriminalisation, beyond the growers-tribe philosophy that dagga should enjoy the legal baggage of a sweet potato. “I'm the carrier of the keys,” he says, and leaves it at that.

“Sister Vee” sits across the bay from corporate political thought. “I don't need no licence to grow. I get my licence from Jah,” says the Rastafarian. Dagga is her religion's sacrament and her ticket to the majority of the peninsula's police cells since the 1980s. Product is sourced from a network of growers stretching from Cape Town to Plettenberg Bay.

She ruminates about the silver lining that prohibition afforded Cannabis sativa's integrity. The precis is that a plant's innocence and healing capacity are being seized upon by biosynthetic conglomerates and the apothecaries are going to ground. 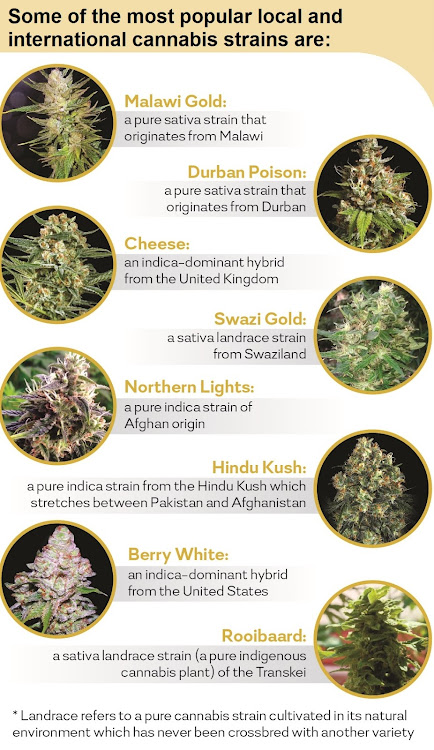 A 2019 paper published in Nature described a breakthrough at the University of California, Berkeley, for biosynthetic cannabinoid production using genetically modified yeast.

Samuel Banister, a chemist at Australia's University of Sydney's Lambert Initiative for Cannabinoid Therapeutics, and not a research participant, says: “You're asking a yeast cell to make something it doesn't normally make ... there's always the chance it might become toxic or have other downstream effects on the viability of the cell.”

Cannabis culture's trust deficit evolved during prohibition in the no-man's land between the criminals and the lawmakers. The growers cast themselves as dagga's guardians.

Counter measures to the existential threat of dagga that is infected by a “terminator gene” — the endgame of monetisation in rendering seeds sterile to eviscerate the dagga underground — are being pursued, Sister Vee says: “Me, we, everyone doing seed banks. Not to grow. To store and protect.”

The dope on dagga in SA: legality, potential & potency

After the Constitutional Court ruling in September 2018 that decriminalised the use, growing and possession of dagga in private and for personal ...
Lifestyle
1 year ago

How will vaping or smoking weed affect the cost of your life insurance?

The health implications aside, users of cannabis and vapes could pay more on their insurance premiums
Lifestyle
1 year ago

People are putting marijuana into everything and extolling its wonderful health properties, but the experts advise caution
Lifestyle
2 years ago
Next Article