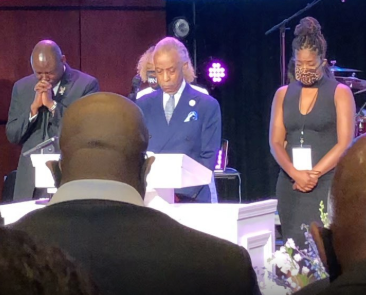 Reverend Al Sharpton delivered a powerful speech at the memorial for George Floyd, the African American killed by Derek Chauvin, a white police officer in the Minneapolis police department.

Floyd died last Monday after the officer pressed his knee against his neck while he detained him. Floyd was suspected of passing a fake dollar bill at a local shop, TimesLIVE reported.

His death has resulted in protests as many around the world took to the streets to condemn racial discrimination and police brutality.

Sharpton called on the US authorities to act and ensure justice for Floyd and other victims of injustice.

Here are five quotes from his speech:

Floyd's cause of death is common. It shouldn't be

“George Floyd must not be among the deceased. He did not die of common health conditions. He died of a common American criminal  justice malfunction. He died because there has not been corrective behaviour that has taught this country that if you commit a crime, you must pay for the crime you commit.”

“I stood on that spot [where Floyd died], and the reason it got to me is George Floyd's story has been a story of black folks. Ever since 401 years ago, the reason we could never be who we wanted to be is because you kept your knees on our necks.”

“There is a difference between those calling for peace and those calling for quiet. Some of you don't want peace, you just want quiet. You just want us to shut up and suffer in silence. Those who broke the law must pay for whatever law they broke, but so should the four police officers who caused this funeral today.”

“When I looked at protests where, in some cases, young whites outnumbered the blacks marching, I knew it was a different time and season. When I looked and saw people in Germany marching for George Floyd, when they went in front of parliament in London, England, and said it's a different time and season, I tell you, America, this is the time of dealing with accountability in the criminal justice system.”

Activists took to parliament on Wednesday in protest over the death of George Floyd, who died at the hands of Minneapolis police in the US recently.
News
1 year ago

George Floyd's death at the hands of the police has inspired the ANC-led tripartite alliance to start a campaign to raise awareness of the “demon of ...
Politics
1 year ago