‘The Godfather’ turns 50 — here’s how the legacy continues

The most epic crime film in history spawned three gems 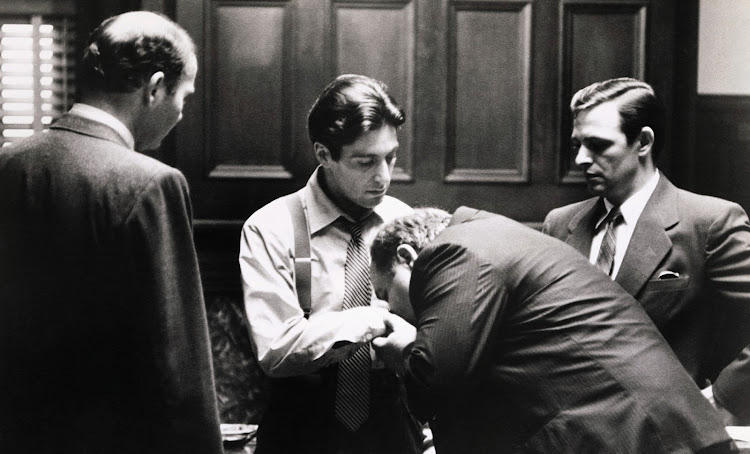 Clemenza (Richard Castellano) kisses the hand of the new 'Godfather', Michael Corleone (Al Pacino), in the last scene of 'The Godfather'. The movie has remained a firm favourite with fans and critics alike and inspired countless imitations and tributes.
Image: Getty Images/Bettmann

This week marks 50 years since ecstatic reviews began to appear in US magazines and newspapers for an epic crime film that changed the face of the genre and, in many other ways, the storytelling universe of cinema and television forever.

Adapted from a popular, if less than literarily impressive, pulp novel by Mario Puzo, Francis Ford Coppola’s The Godfather combined Puzo’s garish gleeful mob drama with his own experiences as an Italian-American, to create what remains one of the greatest family sagas in cultural history.

As so often is the case with Coppola, the story of the film’s making is an epic in itself and will soon be told in a forthcoming dramatic series, The Offer, based predominantly on the memoir of the film’s charismatic wheeler-dealer producer, Robert Evans. As is also the case with much of the director’s peak creative 1970s output, The Godfather has remained a firm favourite with fans and critics alike and inspired countless imitations, tributes and continuations of its aesthetic and central themes.

In honour of the 50th anniversary, Coppola has just released a lavish 4k restoration edition of the film, which is being shown in cinemas in the US but unfortunately for us won’t be making an appearance on SA big screens.

In recognition of the long shadow that The Godfather has cast on the last half-century of film and television drama across the globe, here are a film, a series and a Coppola recut that continue the legacy that the saga of the Corleone family has left so indelibly stamped on the consciousness of popular culture.

Not directly crime-focused but certainly very much concerned with family and the effects that terrible events can have on the bonds that hold them together, Taiwanese director Chung Mong-Hong’s epic 2019 drama is a stunning and moving piece of world-cinema that owes some small but noticeable thanks to The Godfather.

That’s not least in its grimly compelling opening scene in which a severed hand falls into a bowl of food, thanks to the delinquent actions of the family’s black sheep son A-Ho (Wu Chien-Ho), recalling Coppola’s famous severed horse’s head.

Like the Corleone saga, Mung-Hong’s film is deeply concerned with the relationships between brothers and their relationship to their parents. It’s the story of two sons, the elder A-Hao (Xu Guang-Han), who is the apple of his father and mother’s eye and makes them glow with pride, and his good-for-nothing younger brother A-Ho, who can’t seem to do anything except bring them shame and land himself in increasingly dangerous trouble and finally — thanks to a little help from his furious father — gets locked up in a juvenile delinquent centre.

That’s only the beginning of the family’s many challenging tribulations and the results are always surprising, provocative and philosophically and emotionally engaging. That’s thanks to Mong-Hong’s superb direction and visual flair and his ability to raise necessary but uncomfortable questions about families, and the actual ability of any of us to properly change in any real way when faced with difficulties that often threaten to expose our worst inclinations.

• 'A Sun' is available to stream on Netflix

We didn’t need a global Covid 19 lockdown to remind us of the genius of David Chase’s epic gangster family drama but all the re-watching and discovering that it enabled certainly didn’t hurt the reputation of the show that changed the face of television forever.

James Gandolfini’s central performance remains, more than eight years since his death in 2013, one of the most truly complex and magnetic in television history and his Tony Soprano continues to be one of the medium’s most beloved and rewardingly rewatchable creations.

Packed with visual artistry, ingenuity, brilliant characters and performances, razor sharp comic timing, dramatic tension and the original perfectly curated TV soundtrack that all other soundtracks have since emulated, Chase’s crime-family saga about a New Jersey mob boss, his fraught relationship with his mother and his dedication to his family took the blueprint laid out by Coppola’s 1972 classic and stretched it into something even more epic, relevant and almost as enduringly influential.

At the heart of all its violent character kill-offs, eminently quotable one-liners and litany of water-cooler shocker-moments, The Sopranos was firmly focused on The Godfather’s key themes of family, loyalty, ambition, power and the ability of home-cooked Italian food to hold everything together. It still remains an almost perfect epic family saga and well worth a re-binge, whatever the hell else is going on in the real world.

• 'The Sopranos' is available to stream on Showmax

THE DIAMOND IN THE ROUGH

THE GODFATHER CODA: THE DEATH OF MICHAEL CORLEONE

When it was first released in 1990, Coppola’s finale to the Corleone trilogy was widely dismissed and bemoaned by critics as failing to live up to the brilliance of the first two instalments.

In 2020, to celebrate what had previously been known as The Godfather: Part III, Coppola went back to the edit suite and slightly but significantly tinkered with the original material to surprisingly inventive and suitably rehabilitative effect.

By simply changing the beginning and ending and subtly altering a few key scenes, Coppola managed to show that the biggest reason for the lukewarm response to the film’s initial release lay with critics and the times they were writing in, rather than any lack of dedication on the part of the director to his beloved saga of the rise, fall and death of Al Pacino’s Michael Corleone.

If anything, it’s in the Coda that Coppola, whose attention in the 1970s was distracted by his deep antagonism towards the Vietnam War, perhaps demonstrated his most personal and heartfelt connection to The Godfather material, and the final version of the saga’s final instalment stands as a more than fitting conclusion to all its great overarching, still universally resonant, concerns.

• 'The Godfather Coda: The Death of Michael Corleone' is available to rent or buy from Apple TV+

WATCH | 'The Godfather, Coda: The Death of Michael Corleone' trailer.

Sober actor Gary Oldman on playing the drunk in 'Mank'

The award-winner has played some of film’s most iconic characters, both real-life and fictional. In this wide-ranging interview, he opens up to Lucy ...
Lifestyle
1 year ago

For its 40th birthday, the film will enjoy a limited IMAX, 4K restoration release that comes in at 183 minutes
Lifestyle
2 years ago

The end of the reel: deaths of three cinema greats a blow to film industry

The world of cinema is greatly weakened by the passing of screenwriter William Goldman and directors Nicola Roeg and Bernardo Bertolucci. All were ...
Opinion & Analysis
3 years ago