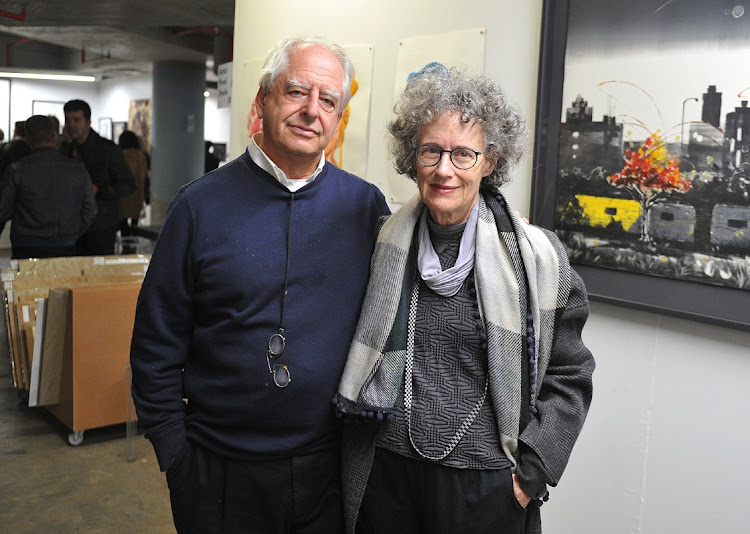 This week I broke one of my biggest social no-nos.

I found myself dashing from one end of town to the other on Thursday after saying “Yes” to two social events on the same evening.

First, a bit of speedy art viewing and people-spotting at a thriving art fair in an unusual space which showcases works by artists known and emerging.

The Turbine Art Fair was first held in 2013 in one of my favourite Joburg landmarks, that Newtown building with the broken windows which once housed the City of Gold’s largest steam power station. 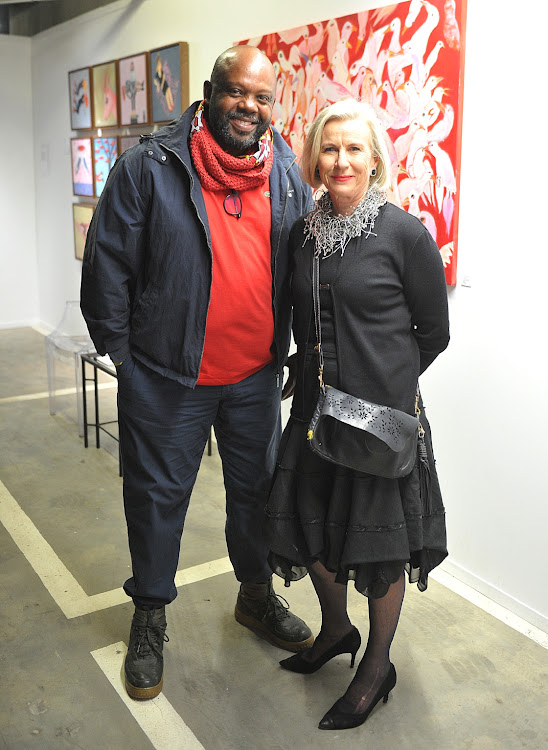 The master stroke of Glynis Hyslop, TAF, as it is now known, gives this event and catering maven behind conference firm The Forum Company the chance to dabble in her love of art while putting on a good show.

And this time she abandoned properties in her stable for a novel new spot — the parking lot beneath the newish Joburg hotspot called Oxford Parks, between Rosebank and Illovo, as the locale.

Aware that I had a tight itinerary, PR gal Marina Smithers-Carlaw (granddaughter of the late, great hotelier dame Liz McGrath) was waiting at the entrance to whisk me inside. Picking up a glass of Steenberg bubbly, I meet Glynis in the middle of the venue which, with its white-walled enclaves and passages, looks the part of a spacious gallery space. As we catch up, I spot Greg Maloka, the ex-Kaya FM MD, who tells me he has taken on the musical director hat for the Delicious festival.

Around the corner at a section called Off the Grid, which is curated by Maja Marx and features artists on the rise such as Yonela Makoba and Jeanne Hoffmann, I bump into my fav society dame, Peta Eggierth-Symes with her husband, Peter, who points out the rather phallic shapes of one of the sculptures on the floor.

Next it’s meeting an artist who is involved in a rather large creative undertaking.

Usha Seejarim tells me the massive 19-tonne work she created out of steel tubes in the form of half a wooden clothes peg had just arrived in Houston, Texas, on its way to the Nevada dessert where it will be erected as part of the Burning Man festival.

Half a peg? I repeat.

“I wanted to strip the functionality of it — when you remove one half, it can’t function, essentially,” she explains.

Onto someone who made headlines in the British press last month after suggesting that the statue of wartime PM Winston Churchill should remain boxed up as it was during the Black Lives Matter protests in London.

“I don’t have anything against Churchill,” explained William Kentridge. “I just love the box around him. It suddenly made people think about the sculpture. It made it a question of who he was.” 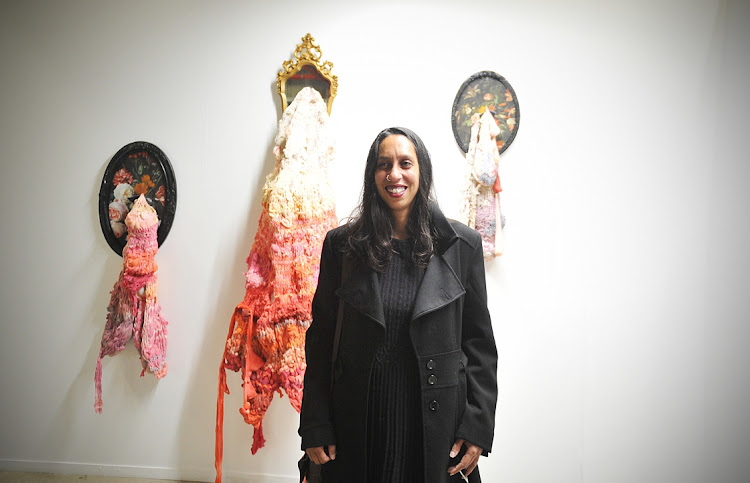 In turn, it will be interesting to see the Brits’ reactions to our great living artistic treasure —  the famed Royal Academy of the Arts is showcasing works spanning his 40-year career at its major autumn exhibition in September.

Mind you, I was intrigued about what caught the eye of his wife, Anne Stanwix — she snapped up a miniature piece titled Chevy by Abe Mathebe at one of the stands.

From a parking lot and onto a party, with lots of French bubbles at one of Glynis’s other venues: the light and airy function space in The Campus business park in Bryanston.

This was the setting for the handing of awards to “audacious business women” by French champers brand Veuve Clicquot. While in existence for 50 years in France, this was the first time the Bold Award was handed out in SA — hence the occasion. 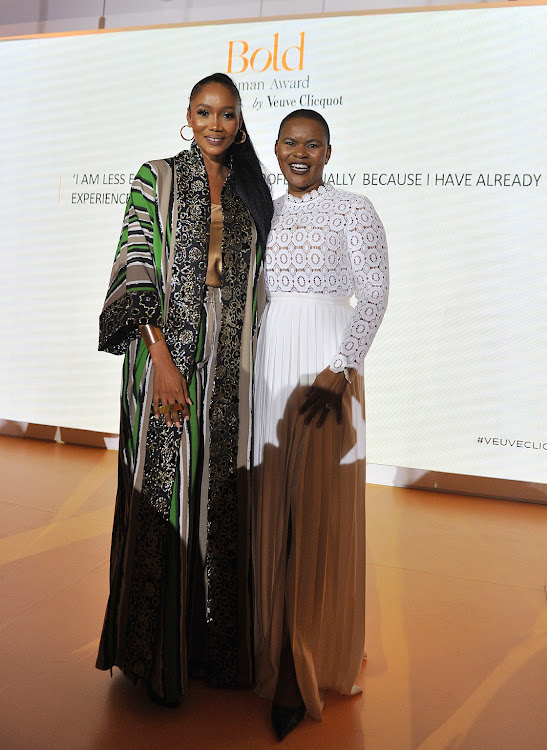 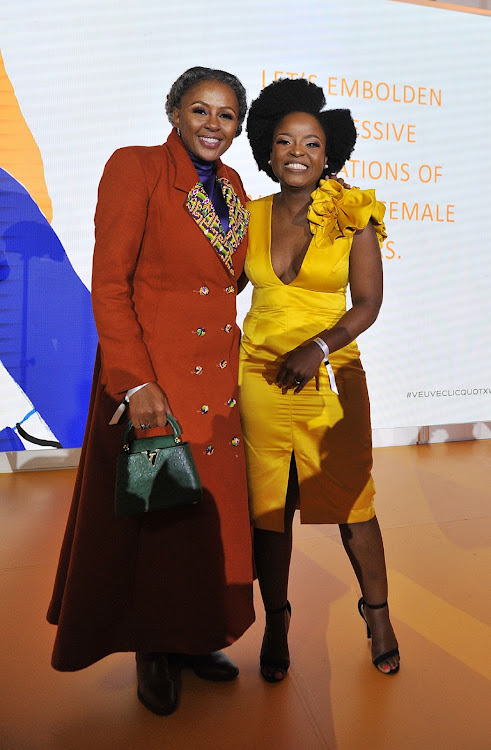 The first recipient of the award went to Gugu Sithole, who owns a glamping adventures company. But I was far more interested in the emerging female entrepreneur winner, Captain Londy Ngcobo, who calls herself “The Blaq Mermaid” and is on a mission to unlock our untapped ocean economy.

“I know a treasure hidden that will change the dark and bring the light ... Please come mermaids and let’s explore this economy,” she encouraged the women present as she accepted her award.

Hosted by that slick and stylish broadcaster Azania Mosaka (looking regal in David Tlale), we were treated by a surprise performance by Ofentse Pitse, the conductor of 45-piece orchestra of young people from Katlehong.

This was possibly the chicest do I had been to in a long time — as I arrived I bumped into travel boss Johanna Makgalemele, striking in blue. Next it was hello to jet-setting interior designer Maira Koutsoudakis, businesswomen Amanda Dambuza and Happy Ralinala. I also caught up with Johanna’s sister Basetsana Kumalo, who had just returned back from a French sojourn with her hubby Romeo, which saw the couple take in Nice, Monaco, Cannes, Provence and Paris.

And I clinked glasses of those tiny bubbles with another artist you need to know: Buhle Ndaba, who has just come back from a sold-out one-woman show titled Swan Song at the Vienna Festival.

As for the grub? I grabbed moreish canapés — roast beef slivers on spinach waffles and charcoal-coloured profiteroles stuffed with smoked salmon at TAF, while at the Bold Woman Award my appetite was well served with bowls of wild mushroom cannelloni and sticky Korean-style beef on cauliflower rice.