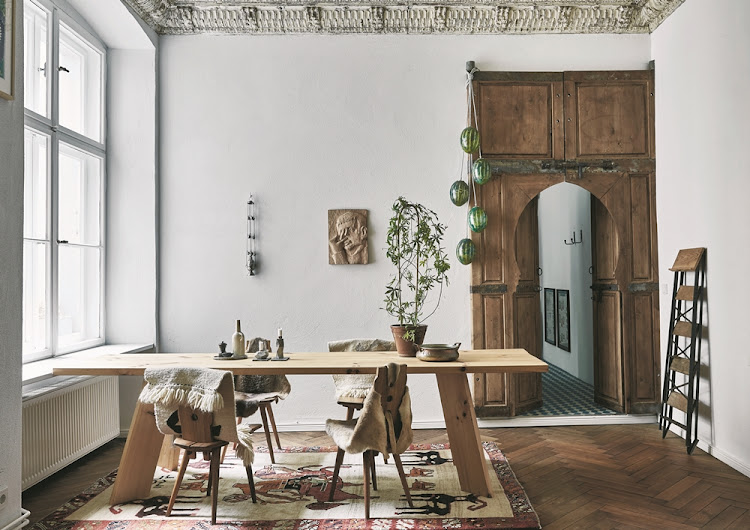 The large Berliner Zimmer is used as a dining room and kitchen; the Moroccan door that leads to the master bedroom was the first piece the owners purchased for their new home.
Image: Greg Cox/Bureaux.co.za

An ornately carved Moroccan door leads from the large Berliner Zimmer to the bedroom in Kasia Korczak and Payam Sharifi’s apartment in a classic Gründerzeitwohnung in Berlin Moabit. Sharifi says that when it’s closed, it has a tromp l’oeil effect: guests often don’t realise that it’s a real door.

“Because it doesn’t fit in that environment — there’s this traditional Moroccan door squeezed into a 19th century house — (they assume that) it’s a sculpture or a wall piece,” he says. “They don’t think it opens up.”

But it does, and it has a curious psychological effect. “There’s an open-sesame effect of opening an old wooden door, as opposed to a standard door, which makes the passage into the bedroom more pronounced, dividing the private space from the more public realm of the home,” Sharifi says.

Korczak had already decided to include the door before plans to renovate the apartment. As their architect Marc Benjamin Drewes, who worked in collaboration with Schneideroelsen, recalls: “The first time we walked into the space, it was already lying on the floor.”

He freely admits that he would never have been bold enough to include it in a renovation, but loves its effect.

The Moroccan door also marks an important transition in the apartment between the spaces with original 19th century features, which were restored, and a contrasting, more modern section where new walls were added to accommodate bathrooms, and where, “we couldn’t rely on the old traditional look,” Drewes says. “Hence, we went completely modern and did something without any details.” 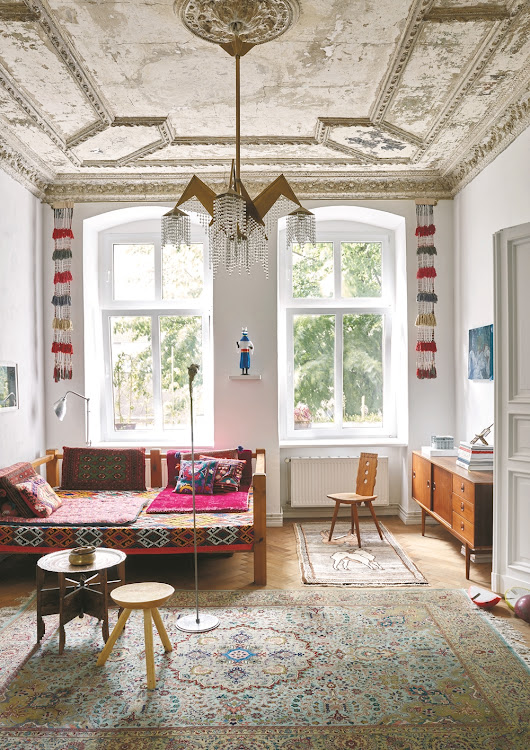 The living room is one of three rooms in which the beautifully-moulded stucco ceiling was painstakingly restored.
Image: Greg Cox/Bureaux.co.za 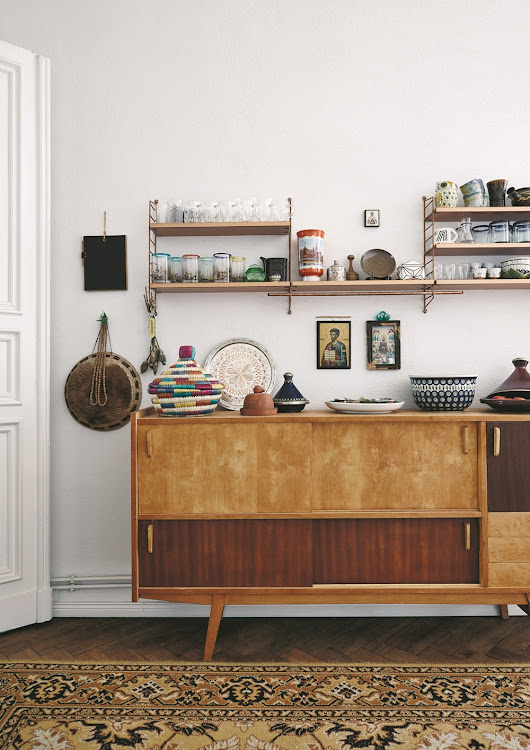 On one side of the kitchen area of the Berliner Zimmer is a mid-century Polish unit Korczak inherited from her family.
Image: Greg Cox/Bureaux.co.za

Finding this apartment and moving in was a turning point for Korczak and Sharifi. As co-founders of the art collective Slavs and Tatars, they and the other members had practised apart, dotted in different cities across the world since they formed in 2006. “We’d been working for seven years in different places in the world and (communicating via) Skype,” Sharifi says.

Sharifi is an American-Iranian writer, researcher, and artist from Texas who has lived and worked in cities including London, New York, Paris, Moscow, and Tehran. Korczak, originally from Łódź, in central Poland, has lived, worked, and studied in London, Arnhem, and Brussels.

They chose Berlin as their base for several reasons. Slavs and Tatars is a research-based artistic practice, concentrating on the region between the former Berlin Wall and the Great Wall of China. “Berlin is perfectly suited to accommodate those research needs,” Sharifi says.

This Cape Town pad is a master class in curating collections

Berlin Moabit is situated slightly north of the city centre, near Tiergarten and the Reichstag. It was in the former West Berlin, but has working-class roots and was among the last neighbourhoods to gentrify. “It’s a microcosm of the whole of Berlin: most of the city is pretty communitarian, but here you have Germans, Turks, Africans, Arabs, and Eastern Europeans,” Sharifi says.

The 19th century Gründerzeit origins of the building were interesting to Korczak and Sharifi in terms of their artistic practice. Part of reason they formed Slavs and Tatars was to envision an alternative idea of modernity that does not so much rupture with the past as innovate within a tradition.

Not only was the anonymous craftsmanship embodied in the ceiling mouldings an example of the kind of craft-based practice that they like to reconnect with in their own work, but it also evoked a pre-modern world view common to many cultures.

Modernity has made ceilings blank slates, but until the turn of the 20th century, people around the world invested their wealth in their ceilings

“Of course, modernity has made ceilings blank slates,” Sharifi says. “But until the turn of the 20th century, people around the world invested their wealth in their ceilings.”

From the wood carvings in middle European medieval houses to the Muslim world, ceilings were invested with “a certain indulgence of assets or wealth”, as Sharifi puts it.

“A nice ceiling elevates you and makes you look up like you do in a cathedral, and modernity recentred that gaze towards the individual and this world and not the next world,” Sharifi says. “You’re always looking at eye level or down, at the floors.”

He found the effect of the ornate “pre-modern ceiling, where you can see a relative amount of wealth for a working-class neighbourhood” intriguing, and he and Korczak saw its potential to allow life and their artistic practice to dovetail.

For the most part, rather than altering the apartment, the renovation involved bringing out its inherent qualities. “The task was not to destroy anything,” Drewes says. The moulding on the ceilings in three of the rooms, for example, had been painted and repainted so many times over the past century that much of the detail had been obscured. A lot of time and effort went into painstakingly shaving off the layers of paint by hand.

As they peeled off the layers, they uncovered patches of colour and even evidence that the ceiling had once been decorated with figurative frescoes. “When everything was cleaned, we decided to just leave it like it is, and not paint over it,” Drewes says. “Now you have this really rich texture of the ceiling that defines the room.”

In the back of the apartment, the renovation took on a contrasting approach. These areas, including the bedroom and new bathrooms, are characterised by a minimalist approach. Walls were added, the bathrooms were modernised, and another bathroom was added in the hallway, too.

“We went completely modern. It really goes in the complete other direction,” Drewes says.

The floors are tiled with patterned, untreated cement tiles, prompted by the Moroccan door, which imparts a particular atmosphere to these areas of the apartment. They offset the pristine modernity of the new areas, and Sharifi notes how they “breathe” and cool these areas without making it necessary to open windows. 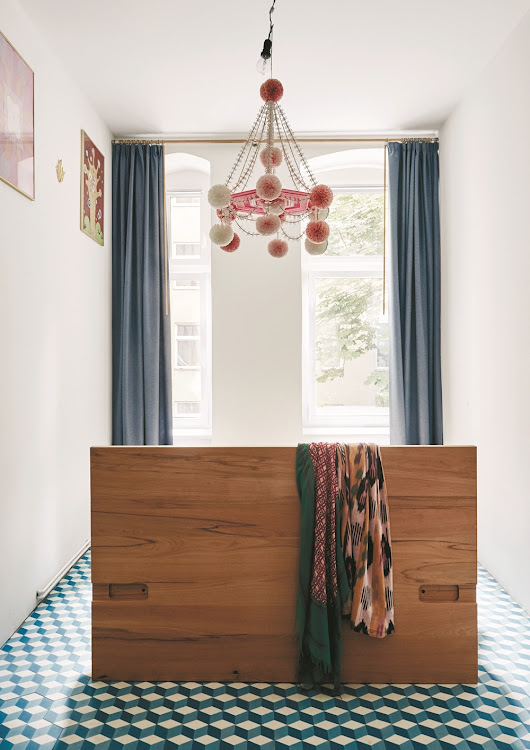 The pająk (above the bed) was traditionally hung in the homes of rural Poles to celebrate the harvest.
Image: Greg Cox/Bureaux.co.za 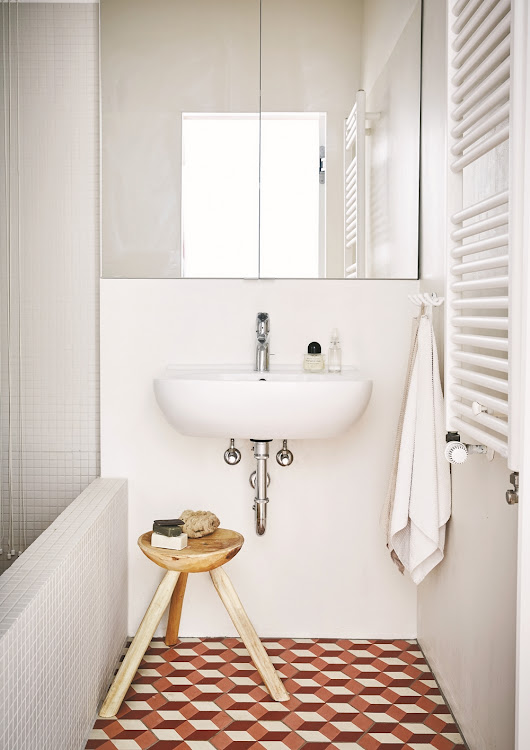 The bathroom is sleek and minimalist; it's tiled with patterned, untreated cement tiles.
Image: Greg Cox/Bureaux.co.za

Just as Korczak and Sharifi’s artistic practice as Slavs and Tatars involves an investigation of complex, ambiguous, and multiple subjectivities, and the design of the apartment itself plays modern and pre-modern eras off against each other, so the furnishings and art continue that habit of a complex investigation of space and identity.

While Sharifi is clear to point out that he’s not anti-modern, a large portion of Slavs and Tatars’ artistic practice involves collaborating with craftspeople from Eurasia to create elements of the installations and objects that constitute their work.

“One of the reasons Slavs and Tatars was created was to put pressure on a received notion of modernity,” Sharifi says. “There’s less emphasis on authorship in the crafts (than) in the fine arts. It’s much less about the individual and much less about rupture. In the arts, the emphasis is always about a break — about going against what came before you; whereas crafts are about actually inscribing yourself in a tradition, and then innovating.”

It was very important to Korczak and Sharifi that their home be socially and culturally inclusive: that both builders who worked on the renovation and art collectors who visit could feel comfortable in it.

“What’s special about our home is that it manages to be an interesting space without being socially exclusive,” Sharifi says. “The idea of hospitality is central to much of Slavs and Tatars’ work, and couldn’t be more relevant politically in the current climate.”

Perhaps one of the most prominent pieces of furniture that embodies this democratisation of design is the Iranian riverbed in the living room. “This is considered an example of a vernacular architecture you find across Central Asia and the Caucuses,” Sharifi says. “You find it at roadside stops. You often find it near rivers, hence its name, and in tea houses. What’s interesting for us is that, as opposed to a Western-type seating where a chair is ‘your chair’ or ‘my chair’, there is no individual space here.”

The significance of the carpets throughout the apartment is another exploration into the possibilities of handcrafts to represent a cultural ambiguity that Slavs and Tatars is interested in. The artists often collaborate with craftsmen from Turkey, Iran, and Poland to create rugs and carpets for their artworks and installations. “In Eastern Europe, people put carpets on the walls,” Sharifi explains. “We, of course, in the Middle East and the Caucuses put them on the floor. We do both in our practice.” 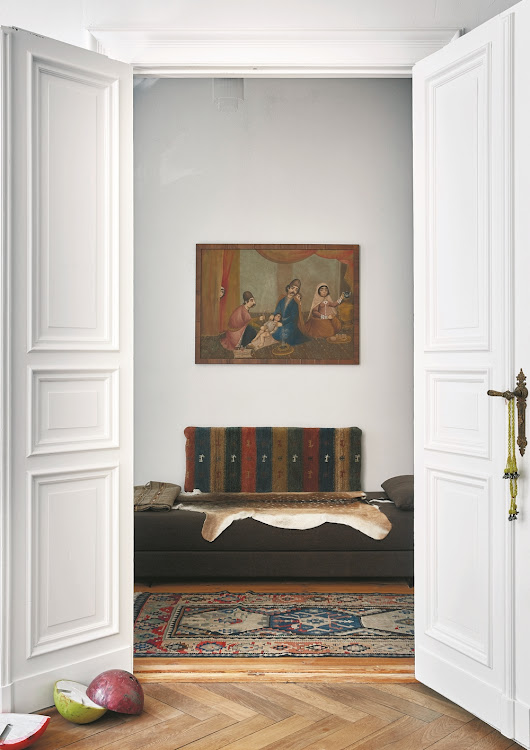 A series of sliced bowling balls, 'Getting Even #6' (2014) by Assaf Gruber, are used as door-stops in the study.
Image: Greg Cox/Bureaux.co.za 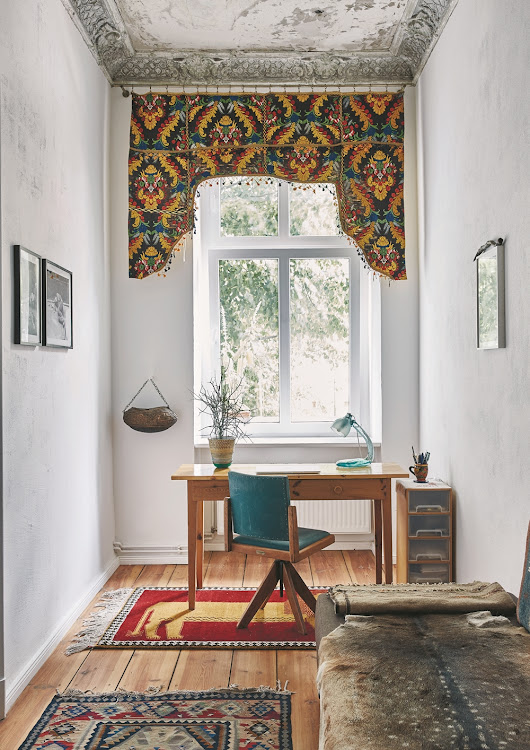 The carpets represent a cultural bridge to a pre-modern era and a corrective to the preciousness with which they’re treated in the West. “In places that make carpets like Iran and Turkey — we’re not precious about carpets,” Sharifi says. “They last for a hundred years. Red wine has spilled on my parents’ carpets for as long as I can remember, and you just wash it out. You don’t obsess about it really.”

For Sharifi and Korczak, this exploration of the possibilities for a modernity that links with the past is found throughout their house. It’s the ambiguity, the uncertainly, and even sense of conflict in certain elements that create its unique sense of hospitality. It invites interaction; it invites in the craftspeople who created many of its furnishings and features; it invites in the past and the present; it invites interpretation, and wine on the carpets.

• This article was originally published in The Edit Living, a complimentary magazine sent to select Sunday Times subscribers.

Thanks to a clever renovation, this compact Killarney apartment now feels larger than life
Lifestyle
4 years ago