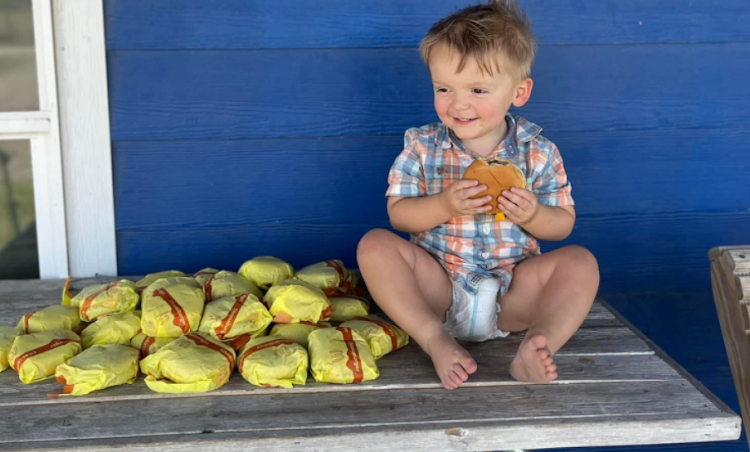 Two-year-old Barrett from Texas in the US ordered 31 cheeseburgers, and paid a generous tip to the delivery driver, using his mother's cellphone.
Image: Facebook/ Kelsey Burkhalter

Two-year-old Barrett from Texas in the US accidentally ordered 31 cheeseburgers from McDonald’s using his mother’s cellphone.

The story caught the attention of thousands when his mother, Kelsey Burkhalter Golden, shared it on Facebook last week.

“I have 31 free cheeseburgers from McDonald’s, if anyone is interested. Apparently my two-year-old knows how to order Doordash.”

I have 31 free cheeseburgers from McDonald’s if anyone is interested. Apparently my 2 yr old knows how to order doordash.

Posted by Kelsey Burkhalter Golden on Monday, May 16, 2022

Speaking to TimesLIVE, Golden said Barrett was using her cellphone camera when he accidentally logged onto Doordash, an online food service, to order 31 cheeseburgers. He also left a generous tip for the driver.

Golden said her phone is password protected but Barrett got to it before she could lock it.

“I forgot to lock the cellphone when he grabbed it. I found out after the order was delivered. My first reaction was confusion. When I realised what had happened, I was shocked,” she said.

The first thing her followers see on her Facebook account is a picture of Barrett and the cheeseburgers he ordered.

His smile gives the impression he knows what he did, but he has no clue.

A novel but effective way to lose weight: learn to resist food ‘cues’

Kuhle Ntsele spent her 10th birthday in the kitchen. The Durban pupil whose dream is to appear on reality food show Man vs Child and who religiously ...
Lifestyle
5 years ago

'Cut fat' if you want babies

A new Danish study linking saturated fats to lower sperm counts could force many South African men to think twice about their high intake of hot ...
News
9 years ago