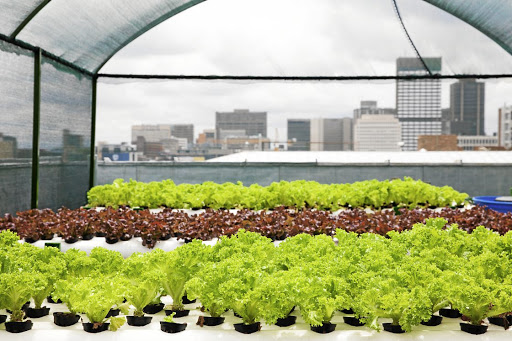 Around the world, food gardens are springing up on suburban sidewalks, waste spaces and inner-city rooftops, their farmers motivated by everything from basic food security and employment creation to more bourgeois concerns such as slow food, prime freshness and the drive to "eat local".

Joburg is no exception: it is home to several long-running food gardening initiatives, with many more in the pipeline.

Joubert Park’s GreenHouse Project, for example, has been going since 2001. It’s an unexpected oasis in the midst of Hillbrow’s raucous, decaying sprawl that serves primarily as a walk-in demo centre, according to one of the project’s "champions", Itumeleng Pooe.

Visit GreenHouse during the week and a facilitator can give you a guided tour, providing information about everything from vermiculture (using worms to make compost) to companion planting and bee-keeping.

The project’s vegetable garden grows in and around the skeleton of the 1937 Victorian-style greenhouse. It’s seemingly overrun with blackjacks, though that’s not a problem: blackjack leaves cooked with spinach and pumpkin leaves make a "top-notch, exotically divine ital [a Rastafarian speciality]," says Pooe.

Vegetables from the greenhouse are sold to hawkers, local restaurants and anybody prepared to venture into Hillbrow. The project also has bee hives, a biodigester that fuels its kitchen (take that, Eskom) and a rooftop succulent garden, where the spekboom is hard at work gobbling up carbon. 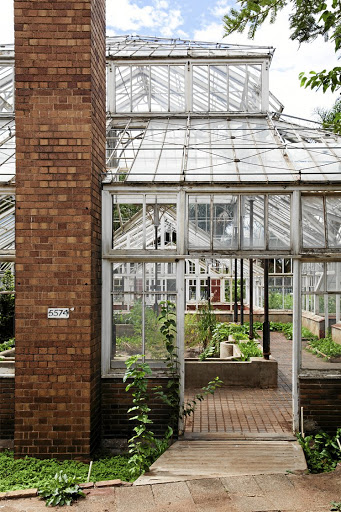 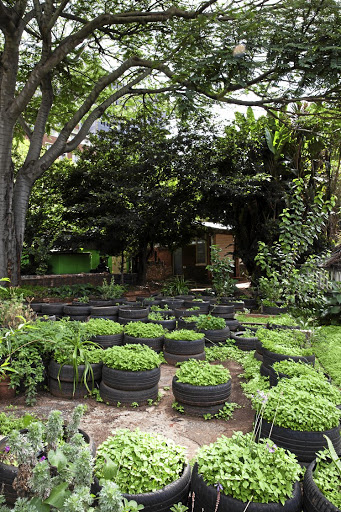 Herbs — and a vast quantity of blackjacks — burst from stacked tires at the GreenHouse Project.
Image: Supplied

A few kilometres away, in Bertrams, the Bambanani Food & Herb Co-operative is an award-winning organic farm that was established in 2006 on an abandoned bowling green. Devised to improve the community’s access to more nutritious food, it sells its fare to local supermarkets, restaurants and hip inner-city markets. It has also played a significant role in educating people about organic farming techniques.

Duduzile Duru is head gardener at Victoria Yards in Lorentzville. This is one of the latest additions to Joburg’s urban farming scene, a place where the public will soon be able to buy locally grown fruit and veg sourced from across the city.

Duru credits nearby Bambanani as one of her agricultural instructors, along with the now defunct Kotze Street Rooftop Co-operative, a hydroponics farm above a homeless shelter in Hillbrow.

The Kotze co-op was similarly created to increase access to employment, improve food security and teach locals about hydroponic farming. Sadly, the garden was dealt a death blow when the building went for a month without electricity.

"In a hydroponics garden you rely on electricity 24/7," says Gary Smith, management consultant at Ubuntu Business Consulting, which equips people with the agricultural and entrepreneurial skills needed to get agribusinesses going, among other things.

"If your electricity goes down ... [and] it’s full summer, the root systems on all of your plants dry out in 6-12 hours ... and then the problem is that you have to sanitise everything.

"All of the tunnels and systems need to be set up from scratch."

FROM THE HANGING GARDENS TO MARS

Hydroponics — growing crops using nutrients suspended in water, instead of soil – has been around for hundreds of years. British philosopher and statesman Francis Bacon wrote a treatise on it that was published in 1627, and some believe the Hanging Gardens of Babylon used a variation of this approach long before then. Today, NASA is apparently looking to hydroponics as a way to grow crops on Mars.

Closer to home, the method is being rolled out as a way to farm in relatively small spaces in the inner city.

"It’s very sustainable," says Smith. "Hydroponics generally gives you a better yield and much better quality, because you’re not competing for limited nutrients in the ground under varying conditions ... it’s very consistent."

Salads in the sky bring fresh taste to the city

Establishing gardens on rooftops or in other spaces within corporate or residential environments means the farmer is able to supply in-house cafeterias and sell to the building’s residents or employees. It’s a win-win situation. The farmer saves on marketing and transport costs, and the customer gets convenient, really fresh produce.

Crops grown in the inner city don’t usually have too far to travel, unlike those from rural areas.

"Generally produce comes in on the back of a truck, going from the farm to a market to a shop or hawker, over the period of a week or two," says Smith. "So, by the time the product gets to the consumer, it’s lost a lot of its nutritional value."

GARDENS IN THE SKY

The potential for taking farms to rooftops was recently demonstrated by the Urban Agriculture Initiative, a partnership between the Chamber of Mines, the Johannesburg Inner City Partnership and WIBC (Wouldn’t It Be Cool), an incubation and mentorship organisation.

In a pilot project run over the past six months, Nhlanhla Mpati was selected to establish a hydroponic garden on a balcony of the 93-year-old Chamber of Mines heritage building in Marshall Street.

Mpati’s interest in agriculture stems back to his upbringing. "I was raised by my grandmother, with a love of nature. We had a garden with mostly flowers, a vegetable patch and a couple of fruit trees, so it’s something that has always been within me," he says.

With further training through the initiative, Mpati planted his first crop of basil at the end of August, and harvested more than 10kg three weeks later. Now, he is expanding his operation to include vegetables such as spinach and carrots, growing about 2,800 plants.

"Anything above 2,500-2,600 is sustainable; you can afford to employ two to three people permanently, and more during harvest and planting — depending on what you’re growing and how much you get per kilogram," he says. 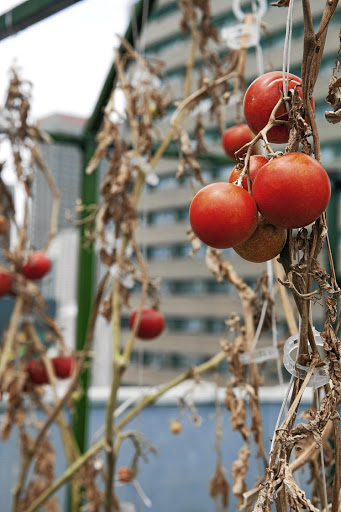 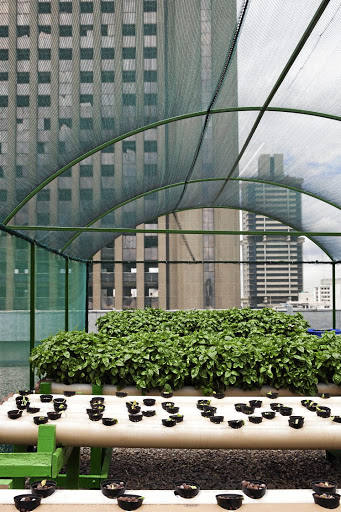 A crop of basil will supply restaurants and traders around FNB's Bank City.
Image: Supplied

Thanks to the success of the pilot, the Department of Small Business Development has agreed to fund another 24 projects in Joburg’s inner city, and property owners have made about 60 buildings available for this purpose, including FNB’s Bank City. So the local skyline may soon be bristling with food gardens, part of a movement that is gaining traction from New York to Tokyo.

Given the developing interest in urban farming in almost every sector of society, continual innovation in farming and the satisfaction of growing your own produce, Joburg may well go from urban forest to urban farm.

WHERE TO BUY PRODUCE FROM JHB'S URBAN FARMS

Seasonal vegetables from their extensive garden are sold on Wednesday between 9am and 11.30am. You can also join their Community Supported Agriculture scheme, to receive a weekly box of vegetables. Visit cnr Marlborough and Richmond avenues, Craighall Park.

Victoria Yards plans to start selling produce from its own and other food gardens across Johannesburg from May/June 2018. Visit 16 Viljoen Street, Lorentzville.

Cultural events filling the olive-tree-fringed amphitheatre; and a marketplace stocked with locally grown produce make this a must-visit cultural hub ...
Lifestyle
4 years ago

Also located at Victoria Yards, the GBC offers courses in many aspects of growing your own food, bee-keeping, as well as processing food and herbs for selling. Visit 24 Victoria Road, Lorentzville.

Chat to one of the garden crew about buying their naturally grown produce — as well as herbal remedies and cosmetics made on site using the GreenHouse’s herbs and propolis from its bees. Visit cnr Wolmarans and Klein streets, Joubert Park

• This article was first published on the Financial Mail website.. Read the original article.