Architect Georg van Gass transformed his outdated ranch-style home into a local icon by inviting in life from the street, park and stream outside 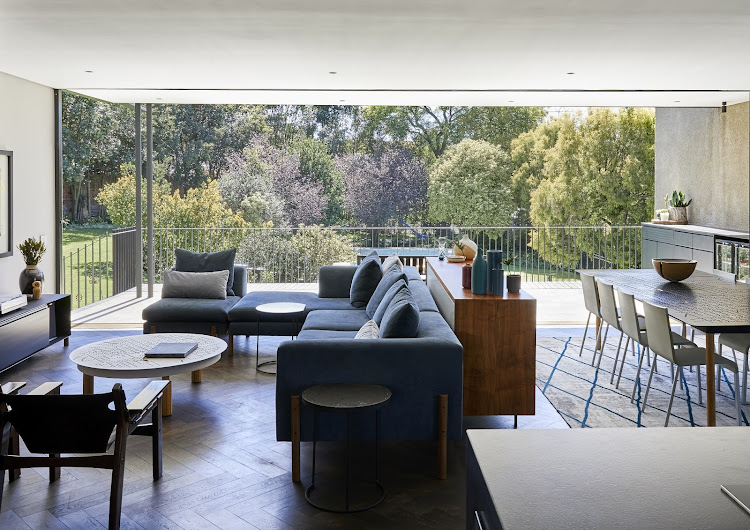 One of the key alterations made to this home was to open the living area seamlessly to the patio and garden with a glass door that slides away completely.
Image: Greg Cox/Bureaux

From the kitchen counter of architect Georg van Gass's home in Victory Park, Johannesburg, he can look up through a large sliding window across the street and the field opposite and down to the Braamfontein Spruit.

Just on the other side of the spruit (a stream that runs through the city and has become a popular mountain-biking route) is a house he refers to as "GASS's Project 001". It was his first job after he struck out on his own and started his practice, GASS Architecture Studios.

"Ever since we worked on that house, I've wanted to live on the spruit," he says. When his wife, Rhone, found this house on a quiet cul-de-sac on the opposite side of the stream from Project 001, they jumped at the chance.

While the houses opposite back onto the spruit, on this side, with the field and the mountain-biking tracks, there's more of a "public domain" as Georg calls it. All day there's a stream of bikers, families with strollers, joggers and pedestrians coming past the house. "On the weekend it's particularly busy; people running, walking dogs," he says. "On Sundays the churches hold baptisms in the spruit, and people sit on the grass." 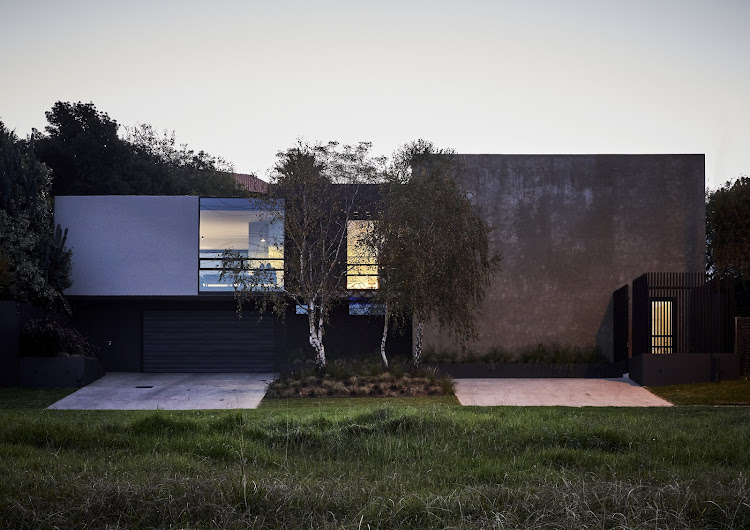 The facade of this late '60s or early '70s ranch-style house has been transformed beyond recognition.
Image: Greg Cox/Bureaux 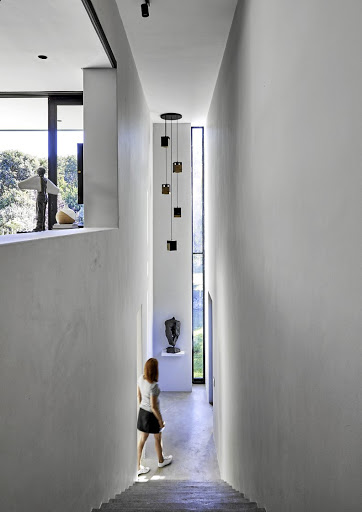 From the entrance hall, you ascend the stairs to the main living area.
Image: Greg Cox/Bureaux 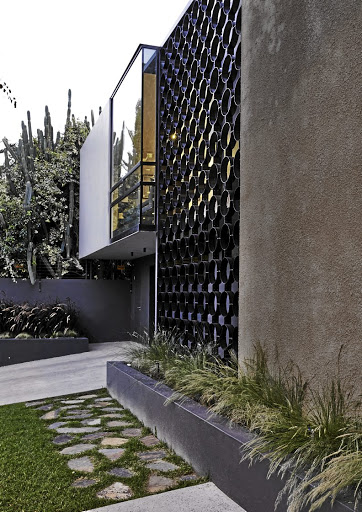 Without a wall in front of the house, you enter the garage directly from the street.
Image: Greg Cox/Bureaux 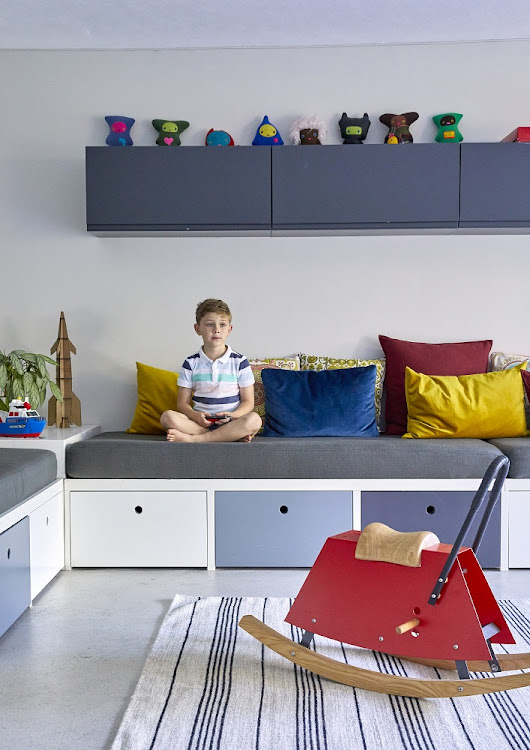 The front door opens almost directly onto a play room, which features built-in sofas that can double as extra beds.
Image: Greg Cox/Bureaux 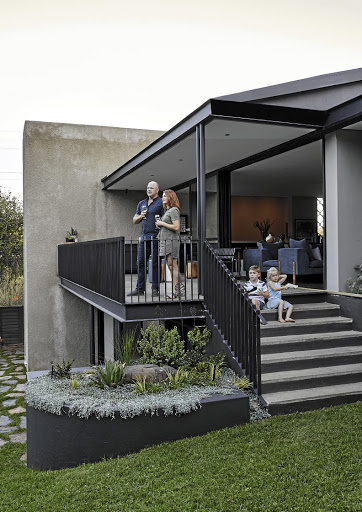 The van Gass family on their patio.
Image: Greg Cox/Bureaux

Glancing again through the big street-facing windows at the front of the house, you can also see some of the iconic towers that define Joburg's skyline, such as Ponte and the Hillbrow Tower. Not only has Georg worked in Joburg's centre, he's always nursed ideas about living in the city, and has long championed the importance of creating safe public space around and between buildings.

The street life of the neighbourhood was the perfect catalyst for Georg to create the kind of house that lives by some of these ideals. He was particularly pleased that, before he even began planning a renovation, the house had one of the features he likes to include in his own designs - it was right on the street, not set back behind a wall. This would allow him to practice what he preaches and link up and connect the interior of his house with the street, field, cycle tracks and spruit beyond.

Originally the house was a typical late '60s or early '70s ranch-style house - a type that seemed almost ubiquitous in Joburg at one point. Georg's father was also an architect, so he grew up aware of architecturally eccentric houses and this one reminded him of many homes he visited while growing up. "It had a typical central passage with bedrooms off it," he recalls.

Georg was restrained in the way he reconfigured the interior spaces, but managed to bring about quite a revolution in its appearance and workings. He moved the entrance to the street (it was up a path and around the side) and opened up the living areas to the beautifully treed, park-like garden at the back.

To the facade he added a retro-modern screen and squared off the street-facing wall, giving it a stippled Tyrolean finish in contrast to the sleek glass boxes that look out over the street.

Georg likes the texture of Tyrolean and its sense of organic softness. Again, a friendly, inclusive gesture to the world outside. "I like architecture and buildings that change - that show age, and age gracefully," he says.

In the opened-up living area, he pushed a large monolithic Zimbabwean leathered granite kitchen island to the front of the house. It's a crucial point from which to look out. "This is very important for me, and part of that engagement with the spruit." 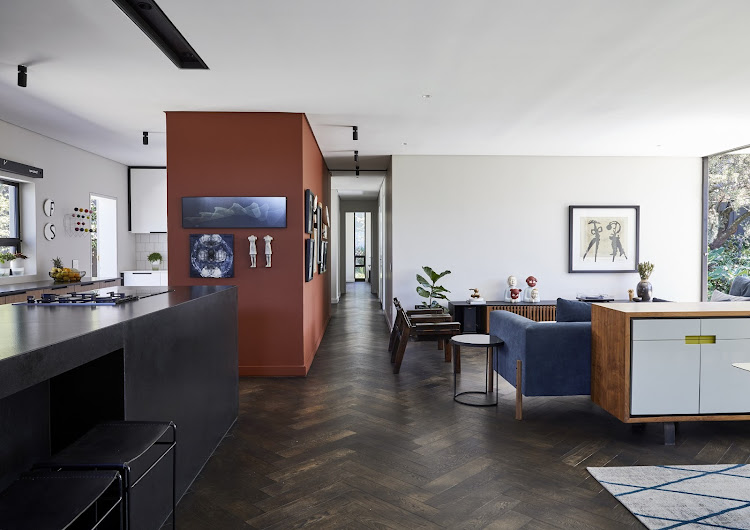 When walking down the passage you can see greenery through a narrow vertical window in the master bedroom.
Image: Greg Cox/Bureaux 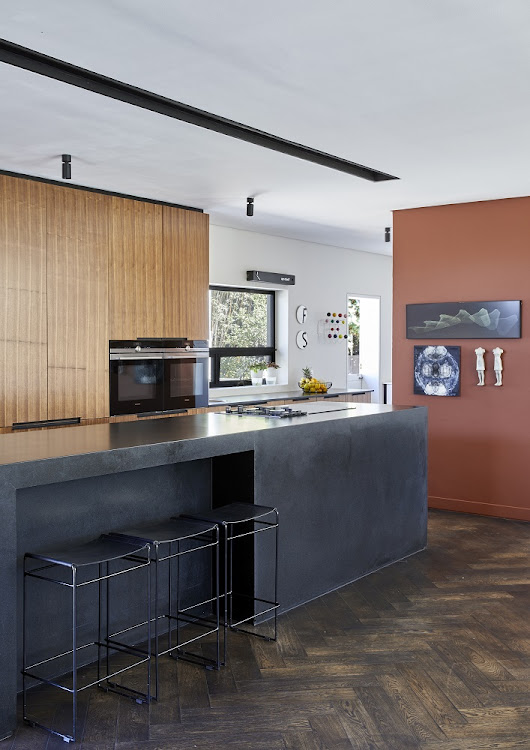 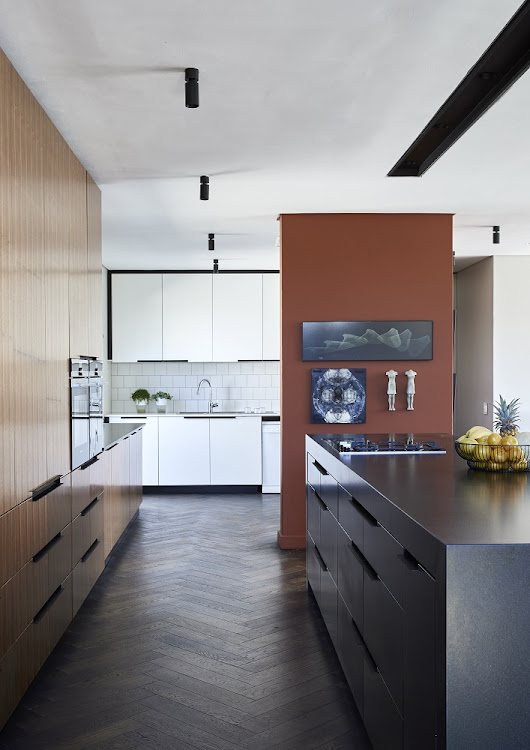 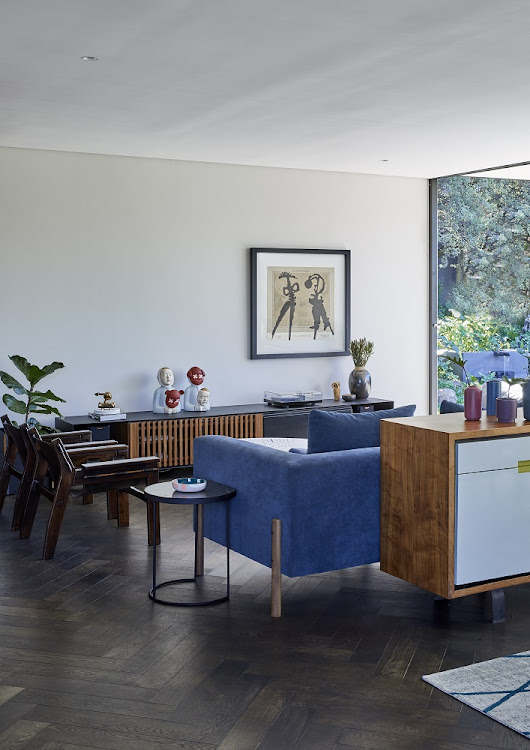 A server divides the living area from the dining area.
Image: Greg Cox/Bureaux 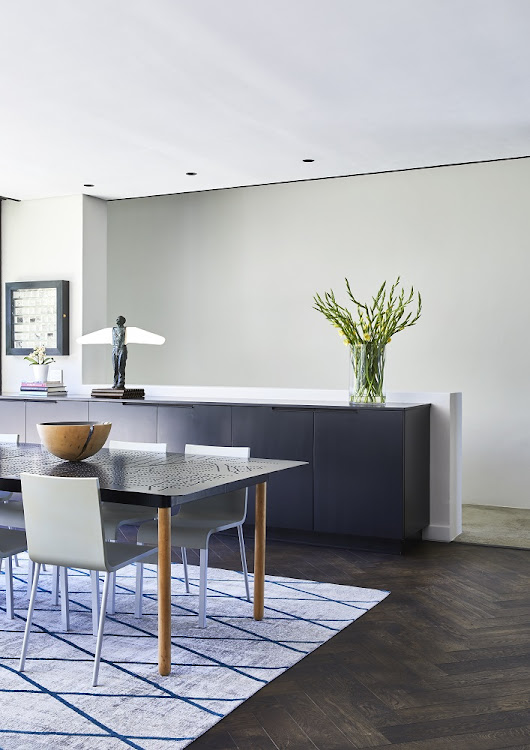 The 'Jozi Table' dining table is a GOET design, featuring a laser-cut steel top with a pattern based on a map of Johannesburg.
Image: Greg Cox/Bureaux

Likewise, the study-cum-guest-room he added above the garage has a beautifully refined glass box corner that hangs out slightly over the driveway. Rhone works mainly from this room, and loves the openness and light. A daybed in the sunny corner underlines its status as a favourite spot. It's remarkable how little privacy is sacrificed in this arrangement and what a sense of wellbeing and connectedness is gained. 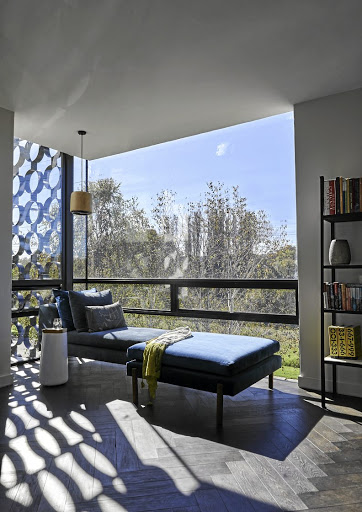 The 'glass box' of the spare room/study looks out over the driveway to the field and spruit opposite the house.
Image: Greg Cox/Bureaux

"I usually tell people you don't need a separate patio," says Georg, preferring to design pavilion-like living rooms that open seamlessly to the outdoors, converting the area instantly into a kind of indoor-outdoor room. "That way, you don't need layers and layers of furniture."

Here the patio already existed, so he extended it with a cantilever. He removed the wall between living room and patio and replaced it with glass doors that slide away completely, so that when they're open it feels as if you're in the garden.

Georg still hasn't doubled up on furniture, but instead has used the patio to stretch the living space outwards when the doors are open. "It's made a massive change to our lives having things open and engaging with the garden," he says.

Similarly, he says: "When I design a house, we'd make the living space way bigger. We'd make the bedrooms bigger." But he's been pleasantly surprised by how a little extra space actually adds to the quality of the rooms.

On the level of detailing, Georg made virtues of necessities at every turn. While he didn't alter the positions of most of the windows throughout the house, he replaced them with double glazing. He also extended them to the ceiling in the children's bedrooms. Then he introduced low horizontal windows that could be opened. He points out that the kids can reach them easily, and by keeping them low, "there's no obstruction in engaging with the garden". Those low windows have become something of a leitmotif throughout the house.

The line for the master bedroom at the end of the house - a glass box that overlooks the garden - was begun when Georg needed a low wall extension from the patio so that the windows could slide away completely. He continued it along the side of the house, creating planters outside the children's bedroom windows, and an extension for the master bedroom, also with sliding windows that can disappear completely. Likewise, the beam above - a necessity for the sliding doors - has become a sleek facade detail behind which he's hidden the gutters. 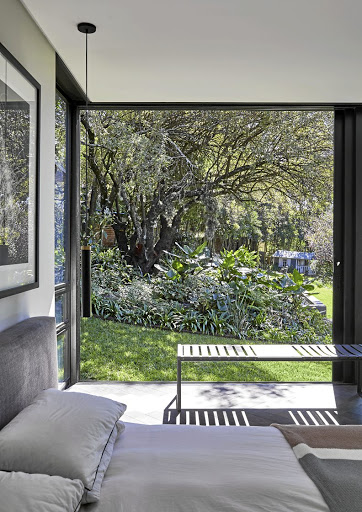 The master bedroom was extended adding another glass box with a sliding glass door that opens to the garden.
Image: Greg Cox/Bureaux 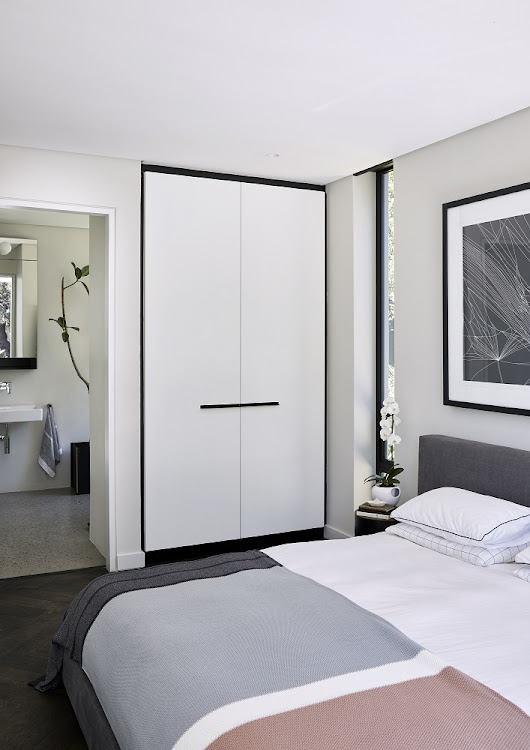 A narrow vertical window in the master bedroom allows you to see greenery when you walk down the passage.
Image: Greg Cox/Bureaux 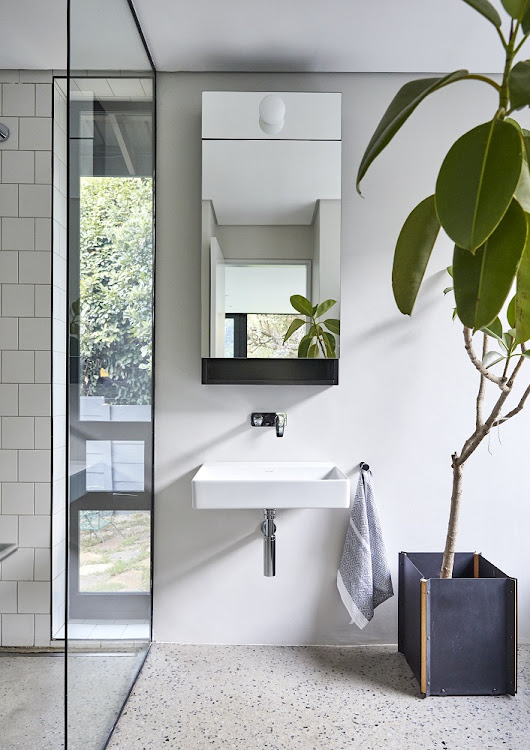 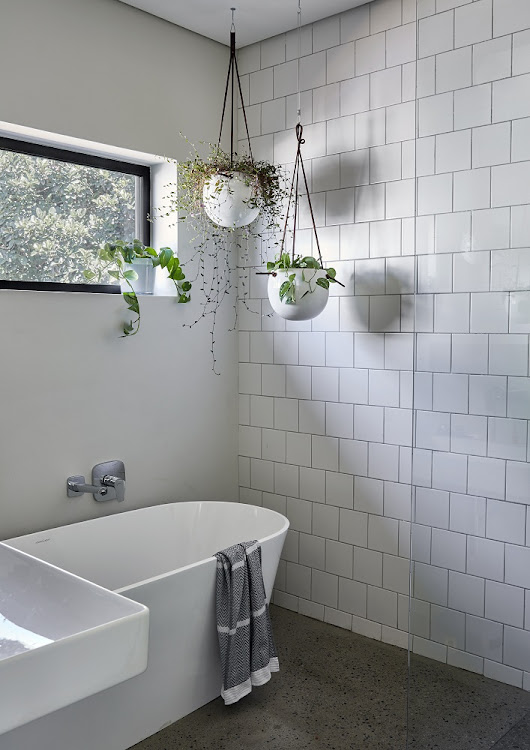 Simple square Johnson tiles - a utilitarian classic of local design - have been used in the children's bathroom.
Image: Greg Cox/Bureaux

The furnishings, Georg laughs, are almost all prototypes of his and Rhone's furniture design studio, GOET. The joinery, wood-turning and laser-cut steel designs that are their hallmarks are found all around the house, giving it a coherence and a sense of exuberance and experimentation. Coupled with their art collection, the space has character and warmth, as well as a distinctive identity that only bespoke, one-off furniture can bring - even if Georg thinks of it more as a testing ground.

It is indeed a house full of ideas. Georg may almost have given his children the conventional house he never had when he was growing up, but has managed to unlock so much architectural potential in the renovation they'll probably never know how close they came to an ordinary suburban home. In the process, he's managed to improve suburbia too.

With whole façades that slide open to the pool area, this contemporary house in tropical Mozambique truly blurs the lines between indoors and out
Lifestyle
3 years ago

Essentially 'three boxes piled on top of one another', the unique design of this contemporary Cape Town house shows a lot of out-the-box thinking
Lifestyle
3 years ago