The 9km Kranshoek Coastal Walk near Plettenberg Bay goes through indigenous forests and along spectacular pebble beaches, and if you're really lucky you might spot the last remaining elephant, writes Nick Yell 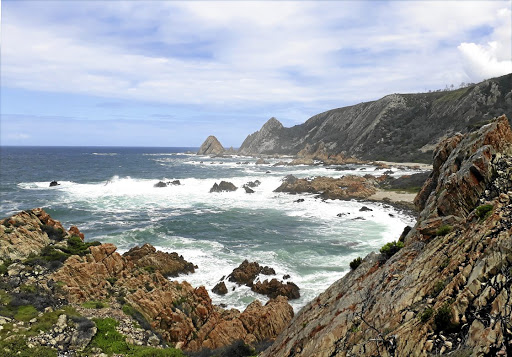 Eighteen years ago, I led young Raimund Petsch on a winding trail up the Soetmuisberg Mountains above Napier, little believing it would be the start of a favoured pastime which has led him and me on numerous hikes in the years that followed. Raimund has even embarked on many exacting treks in Nepal. This, coupled with his 25-year-old body and long legs, made me feel like Frodo trying to keep up with Strider in Tolkien's Lord of the Rings, when we embarked on the Kranshoek Coastal Walk, near Plettenberg Bay, recently.

But I've had some lessons from a hiking mentor of my own; one who in his later years punctuated our walks with ever more frequent cries of: "Hey, what's that bird up there?" or "Look at this magnificent flower!", discreetly catching his breath as I rummaged through our field guides.

Thankfully, there were many indigenous trees to identify - most had been spared by the recent fires that wrecked nearby exotic plantations - and while the multi-hued Narina Trogon evaded us, we still managed to match many bird calls with sightings of species such as the black cuckoo, African olive pigeon and southern boubou.

If game driving is snorkelling, trail walking is scuba diving. Get set for a deep dive below the surface of the country’s best reserves
Lifestyle
2 years ago

As one descends deeper into the V-shaped valley that houses the Kranshoek River, it's amazing to think this gorge was once shaped by the sea in a time of radically higher sea levels and then was further eroded over millions of years by the river that still runs through it. Clinging to its precipitous slopes, the indigenous trees, ferns and fynbos mat the loamy earth together, ganging up on gravity to stop the soil slipping down the mountainside.

After crossing the stream several times and pushing through luxuriant ferns and reeds, we were suddenly at the coast. It was here I'd envisaged we'd stroll on hardened sands near the water's edge, but this rugged route had other plans. I suppose I should've known when I saw the "beach", a gigantic pebble-and-rock installation seemingly paying homage to all things sedimentary, metamorphic and masochistic; but, hey, I'm an eternal optimist.

In-between snacks and gazing out over the wild sea and gnarly coastline, we discussed the rarity of the indigenous forest we'd just walked through. 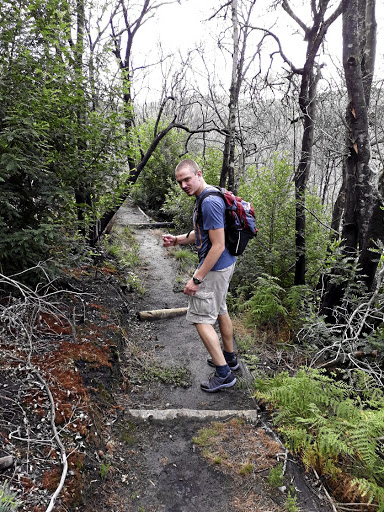 Raimund Petsch is one step ahead of the writer in the indigenous forest on the Kranshoek Coastal Walk.
Image: Nick Yell

Struggling up yet another sharp scree slope, I cursed the brandy and cigarillo I'd indulged in the previous evening.

Yet, amidst the huffing, puffing and constant near ankle-twisting, there were rewards. Achingly beautiful rewards, in fact.

Refreshed by cold wafts of ozone, we were exposed to an Attenborough film reel of gigantic, shark fin-shaped rocks planted in a churning blue sea; beautiful bays and coves that appeared miraculously around every corner and caves that probably housed San and Khoi in ancient and more recent times.

These reminiscences about extinct indigenous South African peoples made me think of the Kranshoek Griquas nearby. When they followed their prophetic leader, Andrew (Andries) Stockenstrom Le Fleur here on their final trek from Kokstad and other cultural enclaves in 1928, there were only about 12 elephants left in the adjacent "Kranshoekbos".

I mention them together only because there are similarities between the tragic plight of the Knysna elephants and the cast-out Griqua nation - both have been pushed to the verge of extinction by the traitorous and capricious nature of colonial avarice and arrogance.

These were dark thoughts to have on a hike, but then I had just come from the brooding Griqua Monument in Kranshoek and had just walked through a dense indigenous forest with nary an elephant dropping to be seen. While the remnants of Griqua culture and "selfstandigheid" (independence) struggle on in the nearby settlement through the organised activities of their national conference based there, only one elephant remains hereabouts. 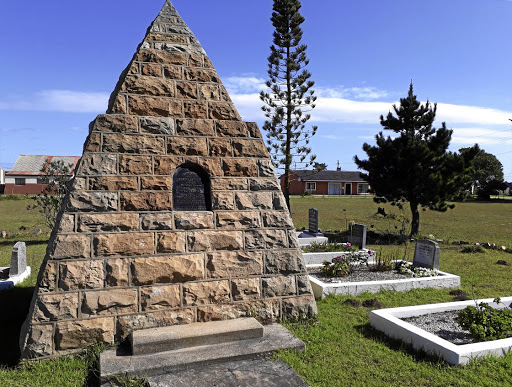 This is the solitary survivor of the 500-strong herd that a census in 1876 revealed, a figure that was tragically reduced to only 30 in 1906. This means nearly 16 elephants were killed annually over this 30-year period; most of them slaughtered by the ignorance of the era's testosterone-fuelled hunting parties.

One of them included the then Duke of Edinburgh, Prince Alfred, who hunted elephant with the Rex family in 1864 - an activity which afforded him sufficient kudos to have a local pass named after him.

After toiling up the last near-vertical slope, we got to a viewpoint and I cunningly pointed out the intricacies of the scene to Raimund while I got my breath back.

At last we had reached the almost flat escarpment and could see the modern dirt track in the distance which would lead us back to the car. There are certainly times when modernity is a blessing.

WHERE: 11km west of Plett on the N2 to Knysna, turn left just before the Sasol service station and make for the Harkerville Forest Station. The hike starts at the picnic site.

5 great adventure activities to do in Knysna

This coastal town in the Western Cape is a dream destination for adrenaline junkies, with canyoning, hiking, kayaking and more
Lifestyle
2 years ago

TRAIL DISTANCE AND DIFFICULTY: There are two trails, one of around 4km (currently closed due to fire damage) and the one we did, which is 9.4km. While it can only be graded a 2, it is very strenuous and you need to be limber and fit to attempt it.

Exotic spots to hike, cycle, sail or surf: your guide to active getaways

It’s billed as one of the world’s great adventure trails, and it delivers. In fact, it can over-deliver, as hiker Hlengiwe Magagula discovered
Lifestyle
3 years ago