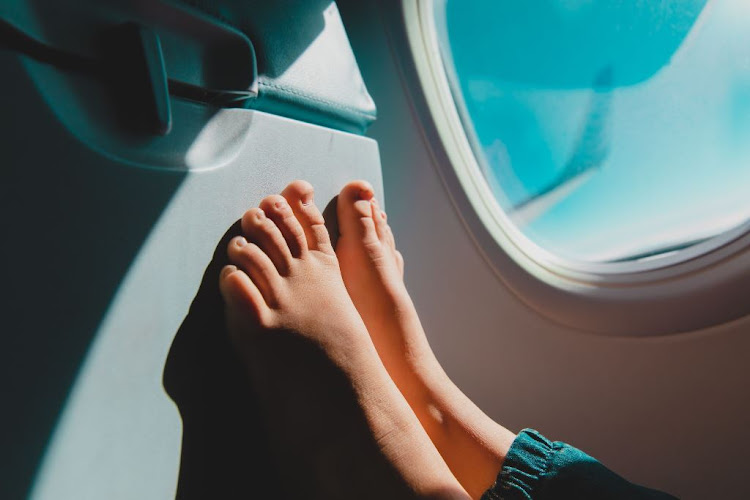 You may love your feet, but nobody wants to see, or worse smell, them while they're on a flight.
Image: 123RF/Nadezhda Prokudina

It's official. Air travel has hit a new low. Just when you thought in-flight etiquette - or the lack thereof - couldn't get any worse, a video showing a passenger using his barefoot to swipe his in-flight entertainment screen has gone viral to showcase just how ghastly some travellers can be.

Not on Twitter? Here's the video proof: A passenger seated at the bulkhead has his bare feet propped up on the cabin divider and uses his right foot to swipe the touch screen to browse through the in-flight entertainment catalogue.

It's a seven-second video that is seven seconds too long.

A friend and witness to the gruesome event shared the video with New York crime writer Alafair Burke, who shared the video on Twitter. Since being uploaded July 15, the video has been seen 8.89 million times as of July 17.

Other offenders include the woman who draped her long ponytail over her seatback blocking the in-flight entertainment screen of the passenger sitting behind her, and #toegirl, who placed her bare feet on the wall beside the passenger in front of her.

Jet-iquette: how NOT to be an annoying plane passenger

No-one wants to hear your iPad, or touch your elbows, or smell your feet, writes Anna Hart
Lifestyle
3 years ago

Forget snakes on a plane, seat kickers are most flyers' worst nightmare

Plane passengers behaving badly: are you guilty of these annoying habits?

The results of a new in-flight etiquette survey reveal that it's never OK to go barefoot on the plane, and that the most annoying passenger is the ...
Lifestyle
4 years ago