Fury, but no regrets, over 'rape' blacklist

The son of a prominent politician in Zimbabwe, a popular comedian, a journalist and several student leaders are among the 11 men publicly accused of rape at Rhodes University. 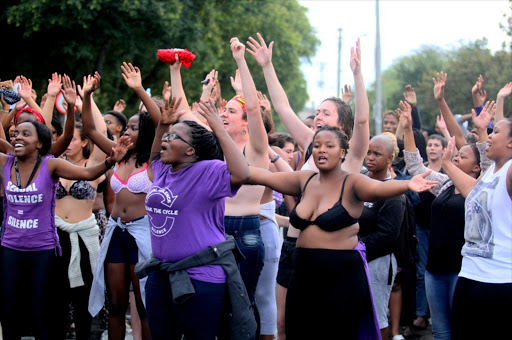 Rhodes University students strip down to demonstrate their control over their bodies during protests against sexual violence
Image: THE HERALD

The Sunday Times tracked down four of the men whose names were on a list posted online last Sunday amid a campaign, called Chapter 2.12, to end rape at universities.

Some of the 11 men named in the anonymous online post have already graduated from the university in Grahamstown in the Eastern Cape. Two of them had been members of the student representative council - one of them president - and a third still serves on the SRC.

Many of the 11 men named were members and leaders of student organisations, some performed well academically and most appeared to be popular on campus.

One, an undergraduate, has been suspended from the university's law society, and the journalist - a Rhodes graduate who worked for the news site Daily Vox - has taken a leave of absence from work.

Another denied his guilt on the CliffCentral radio show this week.

But he said that "because of a probability of numbers", at least two or three people on the list were likely to be guilty of sexual assault.

The former SRC president, now a graduate, said no evidence had been presented against him, and he had not been charged.

"I was saddened because I've given so much to my university ... The damage to my reputation is of great concern, but I've forgiven the people who acted against me," he said.

He was "caught between two feelings": the unpleasant repercussions of being named, and his support for the protesters, who had an "imperative cause".

Despite calls for calm by Rhodes management, the protests against sexual violence spread, and the academic programme was suspended.

Five protesters were arrested on Wednesday morning. They were later released and will appear in court in July.

Carla Botha, one of the five, said the protest was peaceful until the police were called.

"The cops gave us a minute to leave. It wasn't even a minute and we were pepper-sprayed from all sides," she said.

Botha said that in her experience, "wherever you go in town you're treated like an object. Coming from the library at night is the scariest thing."

A 23-year-old male student said that after the list was circulated, he and his peers had confronted some of the men at their residences, and one "even had the audacity to say: 'You guys are cock-blocking me from getting other girls'".

Sian Ferguson of Chapter 2.12, said the list did not explicitly use the word "rapist" and the author of the list remains unknown. "No one has taken responsibility for those names, but ... a lot of people on campus know those names."

Experts believe universities do not want to be known as "the rape campus" and would rather preserve their reputations than tackle the problem.

Kathleen Dey, director of the Cape Town-based Rape Crisis Centre, said: "If [parents] did know, they might not send their children to that university."

Bonita Meyersfeld, the director of the Centre for Applied Legal Studies at the University of the Witwatersrand, said universities also avoided the problem because they feared litigation by alleged perpetrators.

Rhodes University did not respond to claims that it had ignored the problem, but vice-chancellor Sizwe Mabizela has created a task team of staff and students to deal with the matter.

"The things that universities ... tolerate are shocking. These initiation games are overtly sexist and nobody except the woman they are targeting censors them," said Kathleen Dey, director of Cape Town's Rape Crisis Centre.

One of these rituals entails male students publicly rating females by their appearance, said Dey.

She said other attitudes that perpetuate rape culture on campuses included slut shaming; homophobia; the idea that getting a woman drunk makes it easier to persuade her to have sex; lack of respect for gender-nonconforming people: and the assumption that women lie about rape.

"When people believe certain myths and stereotypes about women, sex, gender and rape, it both creates and sustains a prevailing attitude in that community that can serve to promote hostile, aggressive or violent sexual behaviour."