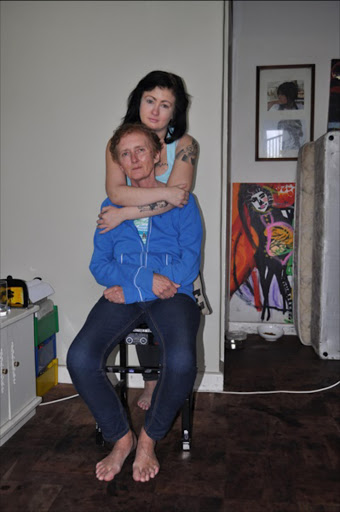 The Cape Town waitress humiliated by #RhodesMustFall activist and Oxford masters student Ntokozo Qwabe says he doesn't deserve his Rhodes Scholarship and should be disciplined for his "idiot" behaviour.

Last week Qwabe sparked online outrage when he gloated on Facebook that he and his friend Wandile Dlamini made Obz Cafe waitress Ashleigh Schultz cry by not tipping her and writing on their bill: "We will give tip when you return the land."

The social media war spiralled into a global tipping frenzy that raised around R145000 for Schultz.

The 24-year-old, who has worked at the restaurant for four years, said she was not going to heed the advice of those urging her to charge Qwabe with racism.

"But I think Oxford should discipline him," she said, speaking exclusively to the Sunday Times from the cramped, one-bedroomed flat in Boston, Bellville, she shares with her mother, Cheryl Grundlingh, who has cancer.

"Revoking his scholarship is not going to help. But I do think the university should have a word with him. Oxford isn't a place where racists from South Africa are fit to go. It's a privilege to be there. He is far more privileged than me. He's at Oxford and I can't afford to study and then I get harassed. But he doesn't deserve to lose everything for ... for being a little bit of an idiot."

"He wants to tear down statues of somebody who has contributed a lot to Oxford scholarships. There are a lot of people out there who would respect that they got a scholarship and that the past is the past. They wouldn't bite the hand that feeds them."

By her own admission, Schultz has little clue what the #RhodesMustFall movement is about. "It's something about complaining about Rhodes's statue ..."

She also confesses she's politically naive even though she has been living and working in a university neighbourhood.

"I support the DA, but I'm not big on politics at all," she said.

She does, however, have an opinion about Qwabe's politics.

"An eye for an eye makes the world blind. Because of something that happened in the past, you blame the people in the future. And then they carry on and carry on and the racial issues will never be solved. Because you will start an entire racial war again and the next victims will start the next war, and so on."

Schultz said she cried what Qwabe called "white tears" because his behaviour was the last straw.

"I was down to my last R10, I had to move out of my place because I hadn't earned enough to cover even half my rent and I had nowhere to stay. My mom was having chemo and is struggling financially. The incident was just the last straw. It was already beyond freak-out."

Schultz said although it irritated her, not getting tipped was no big deal. This was even though she was earning just R15 an hour and pulling a double shift that day.

"I was just shocked by what he wrote. I've handled lots of rudeness in my four years. Like the customer's food is taking too long, or I've forgotten to do something. And then I can take responsibility for it. But I couldn't do anything about his complaint.

"What made me cry was the fact that someone could be so rude without understanding somebody else's circumstances. I can understand protests and aiming at political figures and stuff like that. But you can't go into a restaurant and demand your land back. I have got nothing to do with this.

"I'm not racist in any way, shape or form. I wasn't rude to him once. I get the idea of what he is on about but, you know, pick your fights basically."

Responding to critics on social media, who this week labelled some of Grundlingh's Facebook posts racist, Schultz said: "My family is white and Afrikaans but I wasn't raised as a racist. I've been to mixed schools and my best friend is black. I've never been racist and my mom is not racist. She works with black and coloured nurses who are her family. They ferry her around and make sure she is okay."

Qwabe also picked on the wrong person, says Schultz, because neither she nor her family have owned land to give back. Throughout her childhood she grew up in rented accommodation, flip-flopping between her dad in Milnerton and her mom in Diep River.

Her 51-year-old mother was a nursing sister for almost three decades, the last 15 years spent in the emergency unit at Groote Schuur Hospital in Cape Town.

Her father, Philip Schultz, 50, is a boat-shop repair manager.

Schultz said both parents worked hard to provide. "We never went hungry but we weren't ever wealthy. I didn't have a privileged childhood."

Schultz said her parents also sacrificed to raise her. When she wasn't coping at Milnerton High and became depressed, her mother gave up her home and moved in with her father again to afford her Grade 10 school fees at Abbotts College.

From there Schultz enrolled at the Ruth Prowse School of Art to study photography, only to drop out halfway because "I didn't want my mom to carry on paying for something that I wasn't sure I wanted to continue studying or pursue as a career. So I started waitressing."

Then, four years later, just as Schultz decided she didn't want to be a waitress for the rest of her life, along came Qwabe, who unwittingly revolutionised her life.

"This is the most money I've ever had in my life," said Schultz, whose bank balance has never topped more than R7000. "I want to spoil my mom but I don't want to rush things. I don't want to splurge. I first want to settle my mom's medical bills, which are about R30000. I want to donate some cash to the Animal Anti-Cruelty League because they helped my dog who was badly injured in an accident, and to a hospice organisation that my mom chooses."

Replacing her broken cellphone is as much money as Schultz wants to spend on herself while she plots her future studies, which will probably involve working with animals.

In the meantime, she is still coming to terms with her life's rise.

"It's the weirdest thing that's ever happened to me. It's all still surreal and hasn't quite sunk in. My mom and I are still operating in the mentality of whether we have enough cash to last us until the end of the month. This has changed my life and my mom's.

"And I'm extremely, extremely grateful to all those who tipped me - and to Ntokozo Qwabe for starting it all."

Grundlingh says she is unfazed by the criticism she received on social media this week for commenting on a Facebook post featuring apartheid prime minister Hendrik Verwoerd.

On Saturday she told the Sunday Times: "I actually don't remember this one ... I don't even know who that [Verwoerd] is ...

"Who started all this stuff? I think it was the British ... I don't know. I'm not saying here I support apartheid. It was horrible. Even as a child I was like, 'If I was black I'd fight more than you guys.'

"Why did I share that? Maybe I was feeling angry that day. There's been so much in the news lately, and I just feel that us whites are getting a hard deal.

"When Ash closed her Facebook I thought about closing mine. But I actually don't care. I'm dying in any case. Hate me if you want." - Mike Behr