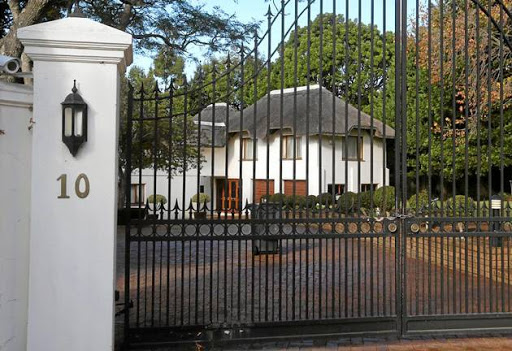 No10 Dawn Avenue in Constantia, the property the Guptas bought from Mark Thatcher.
Image: ESA ALEXANDER

The Guptas are splashing out on a new palace, this time a Cape Town mansion that used to belong to Mark Thatcher, son of former British prime minister Margaret Thatcher.

The plan to renovate the Constantia home - which includes lopping off the thatched roof, building a double-storey second dwelling and upgrading a lavish entertainment area - faces opposition from ratepayers, who fear another Gupta compound on the scale of the Saxonwold property in Johannesburg.

Several residents said there were worrying parallels between the Constantia application and the Guptas' property tussle in Saxonwold, where the family are in a dispute with the City of Johannesburg over alleged building infringements.

A second, successful application is under appeal and ward 117 councillor Tim Truluck said: "They [the Guptas] are in for a battle royal."

The compound, a popular pit stop for senior government officials, is a triple-storey palace with a kitchen on each floor. Residents say the flat roof is a fourth storey - a claim denied by the Guptas.

Truluck said the compound could be described as "a kind of a large guesthouse - a private hotel ... with a cinema and a spa".

His comments echo the Constantia Ratepayers' and Residents' Association circular about the proposed Constantia upgrades: "Given the scale of proposals and the purported usage, we are concerned that this property will be used for purposes other than residential." It said the flat roof was also a deck, reached by external stairs.

• A double-storey, three-bedroom second dwelling that will increase the property's total floor area to 1,955m² - 437m² more than permitted;

• Enlarged staff quarters in the main building to accommodate a property manager, chef and three staff;

• Removal of the thatch in favour of a flat roof; and

• A better lapa and gym.

The ratepayers' and residents' association pointed out "unusual features" for a single home. "The juice bar and the function venue are not compatible with a private home. It would appear that there is very little living space for a typical family," it said in its objection.

"This application is out of place ... at the top of a hill and thus clearly visible."

Documents submitted to the City of Cape Town reveal the Guptas bought Thatcher's property for R17-million in 2005 through a company called Islandsite Investments One Hundred and Eighty, which also bought the Saxonwold property.

The property's R15-million Nedbank bond was cancelled in September, not long before major banks said they were severing ties with the Guptas. According to online property records, Islandsite also owns property in the Cape Town city bowl, with a bond registered with the State Bank of India.

Last year it applied for permission to renovate, submitting a detailed motivation and plans which provoked a similarly detailed objection from the residents' association. A neighbour also objected to the upgrade, saying it was not in keeping with the area's park-like ambience.

To the objectors' surprise, the tribunal approved the plan last month. However, the residents' association claims it could not make representations because the matter did not appear on the tribunal agenda. It is likely to challenge the tribunal's decision.

The 8105m² property was in the news when Mark Thatcher was arrested there in 2004. He pleaded guilty to helping bankroll a failed coup in Equatorial Guinea.

At the time of the sale the British press highlighted some of the home's features, including a 100m² "safari lounge" and a wine cellar.

The front gate was locked with a thick chain when the Sunday Times visited this week, with no signs of life except for two listless guards.

One local voiced concern about his high-profile neighbours in a letter to the residents' association: "They are never there, their verge is a complete mess, overgrown with alien vegetation, they lock their gate with a big chain, and when they do come, they arrive in a long stream of black Mercedes."

News of the council's approval was posted on the residents' association Facebook page, prompting disparaging comments. Rose Murdock said: "They [the Guptas] have been involved in state capture for years so city/municipality capture is child's play for them."

Brett Herron, the mayoral committee member for transport and urban development, this week confirmed the approved upgrade plan but denied subterfuge in the process.

Despite a purchase price of R17-million in 2005, the property's municipal value - which determines rates - is only R13.5-million. An adjoining property of similar size across the road is on sale for R33-million.

At least one commentator on social media suggested the Gupta presence was not good news for the local property market: "That should get property prices plummeting," she said.

Neither the Gupta family nor mandated representatives of their property replied to questions submitted by the Sunday Times on Wednesday.

But responding to objectors' comments in a written submission, the owners' property consultant, Sydney Holden, said there would be negligible visual impact on neighbours due to the screening effect of vegetation. Encroachments on the boundary, for which permission was needed, were limited to the main building and lapa. "The property was bought by the new owners in exactly the state that it is now," the submission said.