Smoked out! NDZ hanging out with cigarette smuggler and gambling tycoon 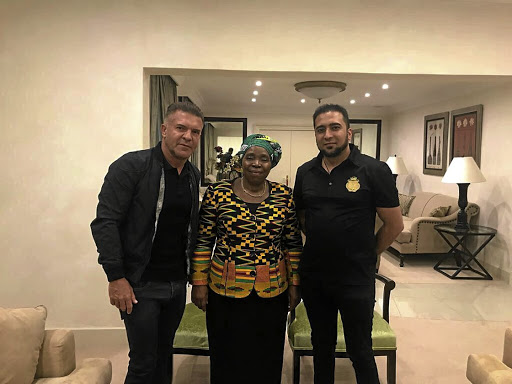 Presidential hopeful Nkosazana Dlamini-Zuma met self-confessed tobacco smuggler Adriano Mazzotti and his business associates more than the one time he claims he met her - and here's the proof.

Instagram photographs prove at least two meetings, while a third shows an associate of the dodgy tycoon embracing Dlamini-Zuma, apparently taken in Greece. The others show Mazzotti and Dlamini-Zuma in London and in Sandton.

Under one of the photographs, gambling tycoon Philip Anastassopoulos exclaims: "Another nice day with mama Zuma."

Last week Mazzotti claimed he had only met the presidential hopeful once.

The photographs and the new information suggest a much closer relationship between Dlamini-Zuma and Mazzotti.

Mazzotti and gambling tycoons Philip and Photios Anastassopoulos - who own Supabets - are said to have taken Dlamini-Zuma to the UK and Greece earlier this year to try to raise funds for her presidential campaign.

Photios, who is also a nonexecutive director of Phumelela Gaming and Leisure, posted a photo of himself, Mazzotti and Dlamini-Zuma on his Instagram account on March 25, claiming he "had a good week with mama Zuma and Adriano in London".

On February 4, Photios posted another photo with Dlamini-Zuma and stated: "Lovely spending another day with mama Zuma." 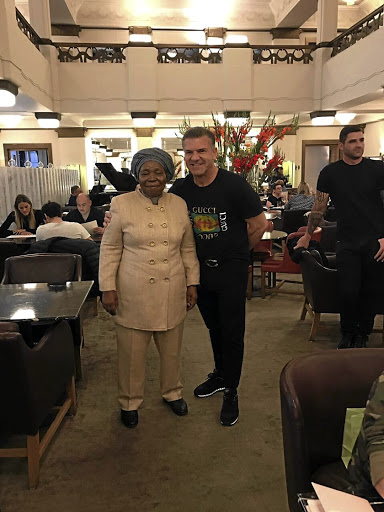 Photos of NDZ campaign paraphernalia believed to have been taken at one of Adriano Mazzotti's properties.
Image: Supplied

Dlamini-Zuma, through her spokesman, Vukani Mthintso, yesterday denied knowledge of Mazzotti and the Anastassopoulos brothers' contributing to her campaign, although she conceded she had met with Mazzotti while on a trip in London.

"There are millions of supporters and well-wishers to the campaign, which is led by the ANC Women's League and supported by other structures. Many make contributions, either by volunteering their time or in kind to the structures," he said.

Dlamini-Zuma also denied that she had "any direct or substantive relationship" with the self-confessed cigarette smuggler.

"She has never approached him for any assistance, nor has he approached her and offered assistance with her campaign. The two occasions she met him were chance meetings, where there were other persons at the same event," Mthintso added.

Sources told the Sunday Times this week that Mazzotti and the Anastassopoulos brothers have been funding Dlamini-Zuma's presidential campaign.

"Dlamini-Zuma has been having secret meetings with these guys twice per month behind her campaign team's back because she knows they won't be comfortable working with these controversial figures," a source said.

"Mazzotti and Photios have been sharing their private photos from these meetings with Dlamini-Zuma with their business associates while lobbying them to chip in some money for her campaign," another source said.

The Sunday Times has seen some of the photos. One of them is believed to have been taken at one of Mazzotti's apartments in Sandton about a month ago.

The Sunday Times reported last week that Mazzotti showered Dlamini-Zuma with an array of election paraphernalia for her ANC presidential campaign.

This week the newspaper was shown photos of NDZ campaign paraphernalia believed to have been taken at one of Mazzotti's properties. 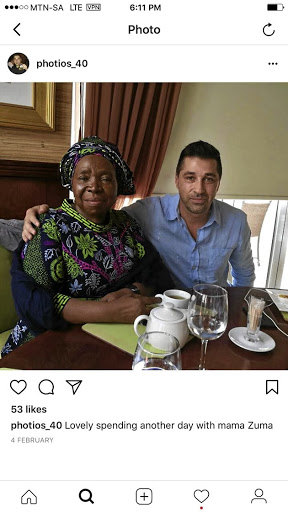 "If Mazzotti claims he isn't funding the NDZ campaign then he is very economical with the truth, " another source said.

Mazzotti last week denied that he was sponsoring Dlamini-Zuma's election campaign and said neither he nor Carnilinx were involved "in any political activities or political campaigns".

However, in his 2014 affidavit, Mazzotti says under the headline "political funding" that "Carnilinx has made a R200,000 donation towards a political party".

He said he had met Dlamini-Zuma only once, and that was in London where he posed for a photograph with her. He said he did not support her.

Dlamini-Zuma this week couldn't categorically deny that Mazzotti or his cigarette company had contributed to her campaign.

Mthintso said Dlamini-Zuma met Mazzotti and Anastassopoulos in London but said she was "invited to a business lunch with Invest Africa" which took place in the UK.

"Dr Dlamini-Zuma met the two gentlemen during the visit to London. Her ticket and accommodation were covered by Invest Africa, as the organiser of the lunch," Mthintso said.

Deputy President Cyril Ramaphosa's supporters are blaming his poor showing in Durban, the ANC's biggest region in terms of membership, on heavily ...
News
4 years ago

Our politicians have mastered the art of saying nothing, loudly

ANC presidential candidates use words meant to achieve only one thing: to commit to nothing
Lifestyle
4 years ago

President Jacob Zuma appointed Bongani Bongo as state security minister despite the fact that the Hawks are investigating him for allegedly receiving ...
News
4 years ago

How Supra shoved President Khama off his own road

North West premier Supra Mahumapelo's blue-light convoy is said to have forced Botswana President Ian Khama off the road in his own country.
News
4 years ago