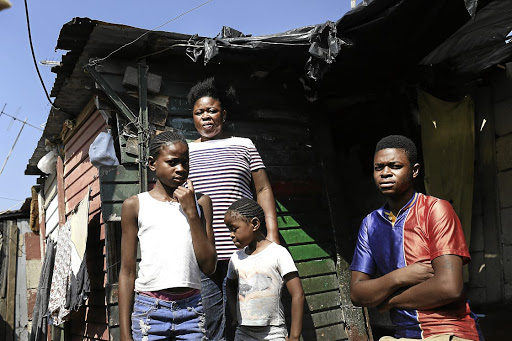 From left, Khanyisa, Solani, Victoria and Songayi Dave Rivele outside their small shack in Alex, Johannesburg. Solani has her sights set on a plot in Waterfall.
Image: Alon Skuy

On a clear day in Johannesburg it's possible to see Alexandra township from a vacant plot in Midrand.

For Alex resident Solani Rivele, 43, the empty stand represents an opportunity for dignity, privacy and a home she can finally call her own. It also represents a waste of something she has never had and is ready to fight for.

"If the land belongs to someone they [should] use it because it's been standing open," said a frustrated Rivele, who shares a small shack with nine family members. "You buy a place to use it, not to leave it, so that's why I believe we will get that place." 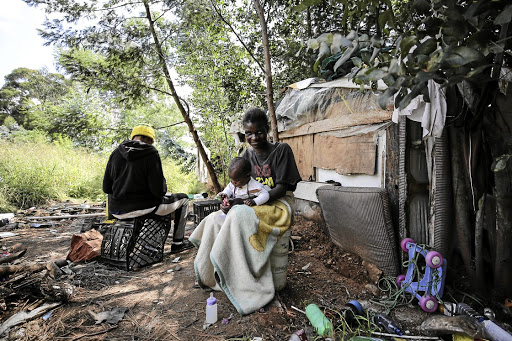 Florence Chauke and her baby at home near Edenvale Hospital, east of Johannesburg. The area has been occupied by Alexandra residents
Image: Alaister Russell

Rivele, who has a son with a disability, has been on the waiting list for an RDP house since 2011. So when members of her community took matters into their own hands and occupied the Waterfall land that overlooks them, she didn't hesitate to join them.

Last weekend, Rivele and two of her sisters joined thousands of Alexandra residents who vowed to "attack" any unoccupied land. Their initial attempt was thwarted by police, who took down nearly 100 structures and arrested five people, including Rivele's sisters, Violet and Nkateko, on Sunday.

They were charged with malicious damage to property and released on bail on Wednesday at the Randburg Magistrate's Court.

Attempted land occupations in Gauteng were followed by violent protests by residents in Hermanus in the Western Cape as communities mobilised to demand better accommodation.

On Tuesday evening, hundreds of Alexandra and Klipfontein residents gathered to discuss new attempts to reoccupy the vacant land in Waterfall, about 15km away. They were encouraged to bring copies of their ID documents and "register" for a 15mx20m stand promised to them by community leaders once the occupation was complete.

Gift Maboke, a community leader who has lived in Alexandra for more than a decade, said none of the city's vacant land was safe from occupation. "Any [vacant] land we see we are going to attack [regardless] if it is owned privately or by the city."

Maboke said more than 7,000 people had signed up to receive stands. He said the fight for land was shared by all poor and disenfranchised people across South Africa.

"We are not talking about Alexandra only. It's not us alone. We are talking about all townships and people who do not have land or accommodation. We are together."

Last month, President Cyril Ramaphosa spoke out against the unlawful occupation of land and called on police to clamp down on illegal occupations. He told MPs the recently adopted parliamentary resolution on expropriation without compensation was not a call for "a smash-and-grab" approach. 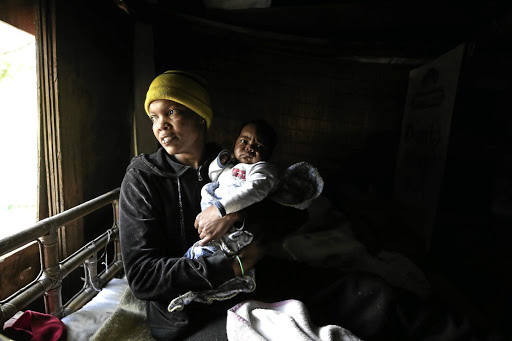 Alicia Koopman with her baby, Jordan, inside her home near Edenvale Hospital. The area is a hotspot for illegal settlement.
Image: Alaister Russell

Professor Ruth Hall, of the Institute for Poverty, Land and Agrarian Studies at the University of the Western Cape, said people had taken parliament's decision as a green light to occupy land. Although the recent spate of land invasions was "clearly political" and "co-ordinated", this did not mean the grievances were not real.

"People are voting with their feet rather than trusting the parliamentary process," Hall said. "It was assumed that the fight would be for rural land, but it has spilt over into urban areas. Lots of South Africa is largely urbanised, so people want access to well-located land. Living on the outskirts is expensive for the poor."

Institute for Security Studies researcher Lizette Lancaster said slow progress in land reform, a lack of service delivery and the government's slow response to grievances gave political parties a chance to "advance their own agendas". She added: "Communities need opportunities and resources to mobilise, and political leaders step into that void."

Washington Maponyane, the EFF branch chairman for Alexandra, said the party's involvement in occupations was limited to supporting the community. "This not an orchestration by the EFF. This is a genuine cause by community members. People are frustrated. They were promised houses and now when they go and verify, their houses are being occupied by other people. The EFF is in support of this genuine cause."

• 70 is the number of land-related incidents (resistance against evictions, land invasions and protest action related to land) in South Africa between 2013 and 2017, according to the Institute for Security Studies, 84% of which took place in metros

The debate on land restitution could have sparked land grabs across the country, according to Human Settlements Minister Nomaindia Mfeketo.
News
3 years ago

Thirteen Umkhonto weSizwe veterans are behind bars for illegally occupying units in a housing development near a KwaZulu-Natal South Coast golf ...
News
3 years ago

No house, but she still got a rates bill

As Nomaza Nomandela occupied land in Hermanus, she got an SMS demanding payment of rates for a house she has never seen.
News
3 years ago 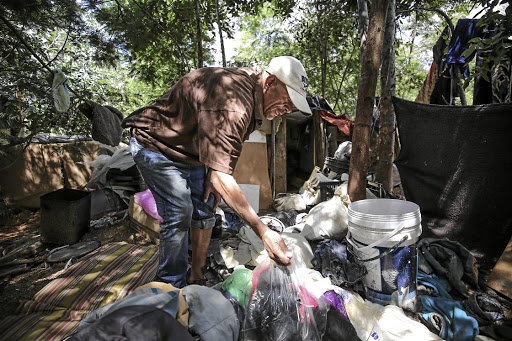 Morris Morgan sorts through some of the items he has collected while living in the settlement near Edenvale Hospital.
Image: Alaister Russell