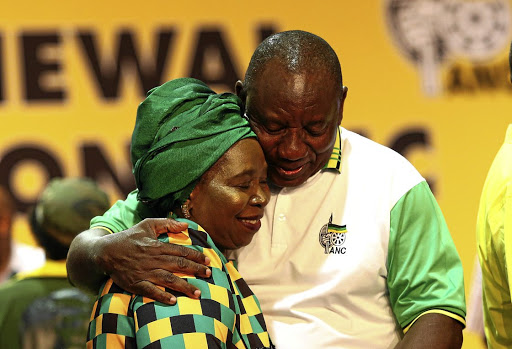 President Cyril Ramaphosa with Nkosazana Dlamini-Zuma. His rise has not yet improved the ANC's image issues.
Image: Masi Losi

The ANC has made a startling admission, conceding that it is at risk of losing power in next year's general election even with President Cyril Ramaphosa as the face of the campaign.

This assessment is contained in a document that was presented at a national elections workshop in Boksburg, east of Johannesburg, two months ago but that has been kept under wraps until now.

In the document, the party acknowledges it could win less than 50% of the votes in the election unless it takes drastic measures to regain the trust of voters.

How Cyril Ramaphosa has moved to rein in defiant Supra Mahumapelo

Support for the ANC further declined in the 2016 municipal elections in which it received only 55% of the national vote and lost key metropolitan municipalities like Johannesburg, Tshwane and Nelson Mandela Bay.

Voting patterns in general elections differ from those in local elections but the 2016 results showed a huge number of ANC supporters either did not vote or backed other parties in protest at the shambolic state of the governing party.

Some in the ANC had hoped that Ramaphosa, whose campaign for party leadership was based on fighting corruption and state capture, would improve the party's political fortunes.

However, the ANC internal document says the party might still not get a majority of more than 50%, and rates the likelihood that it will have to enter a coalition to remain in power as "high".

It says the ANC might even have to go into opposition.

The document says not even the Nasrec outcome, in which Ramaphosa beat Nkosazana Dlamini-Zuma, would necessarily save the party.

"The outcomes of conference have led to a more positive mood in the media and economy, but it should not be mistaken for a massive change in voter behaviour," it says.

"Turning the situation around requires drastic and immediate action."

The document does not quote from any recent survey, but points out that support for the party has been declining since 2014. Late last year, according to the ANC document, "available research" showed the party's approval rate dropped below 50% or "even lower".

The reasons for the party's flagging fortunes included infighting, corruption and state capture.

"For the first time in the history of our democracy the ANC faces the possibility of receiving less than 50% of the votes in a national elections," the document says.

"Through our own weaknesses and negative tendencies we have squandered the goodwill we enjoyed from voters for the past 24 years.

"We now face the possibility of losing majority support in most large cities and in much of the economic heartland of South Africa."

According to insiders, the report was delivered to the workshop by officials working at Luthuli House.

ANC elections head Fikile Mbalula said he was not aware of the document.

The document says the number of loyal ANC voters was shrinking with every election. "This means we also have to campaign more intensively and more coherently to persuade weak ANC voters, and undecided and even hostile voters, to support the ANC."

The document urges leaders to refrain from making "more of the same" promises going into the 2019 election, and instead demonstrate the political will to swiftly address issues raised by voters.

"If we want to make a significant impact on voter mood we need to use the next 15 months to demonstrate political will, concrete actions, and capacity to deal with these issues.

"This includes concrete and drastic action (not just statements) against corruption, especially among our leaders, and [to] strengthen the capacity of the state to investigate and prosecute offenders.

"We also have to provide clear action and proof that we are prioritising job creation and economic development and that our efforts are bearing fruit."

The party says 70,000 volunteers will be needed to go out and persuade South Africans to vote ANC.

EFF leader Julius Malema this week predicted that the ANC would not achieve the 51% required to govern.

He told journalists that the ANC could lose Gauteng, North West, Free State, Mpumalanga and Limpopo.

Ousted Cape Town mayor Patricia de Lille wants a diplomatic posting to the US in return for joining the ANC.
News
4 years ago

There is no denying that the coming general elections will be the most exciting and toughest since the first democratic elections in 1994.
Opinion & Analysis
4 years ago

Mouthwatering prospect of a new Zille or Leon party

Generally, political parties aren't required to be as united as they always claim to be. The splits in the ANC are, by now, world famous.
Opinion & Analysis
4 years ago

The DA attacks people like Mugabe, Gaddafi and Chávez, never Bush, May or Trump, and it needs to liberalise itself before it will attract black voters
Opinion & Analysis
4 years ago