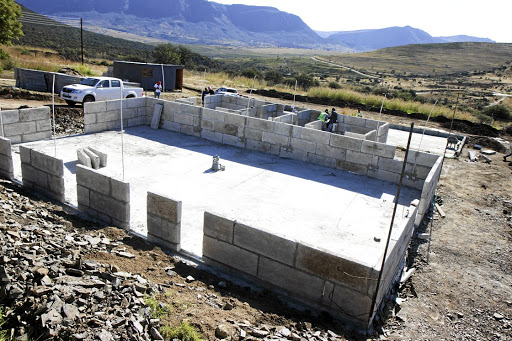 In the race to ensure SA's hospitals are prepped for the expected Covid-19 infection surge, the Eastern Cape has turned to unusual building materials - recycled plastics and polystyrene.

He said the two wards will accommodate 40 ICU beds.

"These are permanent structures. The advantage of alternative building technologies is that it saves time and labour costs. To build houses out of such materials, which are made up of recycled plastics and polystyrene found at landfill sites, takes about 14 days.

"The hospital wards we are now building take three weeks to build. That's from laying the foundations to putting on the roof. Normally it would take to up to three months to build a similar brick-and-mortar structure."

He said the technology, which is approved by the South African Bureau of Standards, the Green Building Council of SA and the National Home Builders Registration Council, was developed in SA.

Greencrete is created by mixing the plastics and polystyrene with chemicals, ash and small amounts of cement. SQT has used the technology to build RDP houses, libraries and schools in Gauteng, the North West, KwaZulu-Natal and the Eastern Cape.

The provincial government is building additional ICU wards at hospitals across the Eastern Cape, including in Aliwal North, Nelson Mandela Bay, Mthatha and East London, to accommodate an estimated 500 patients.

"This becomes very important as the demand for additional hospital beds is increasing at a high rate… Depending on the nature of the site, it could cost about a third of a brick-and-mortar structure."

When SA's first Covid-19 case was detected, a group of Cape Town nurses were told by their bosses that as long as they followed protection ...
News
1 year ago