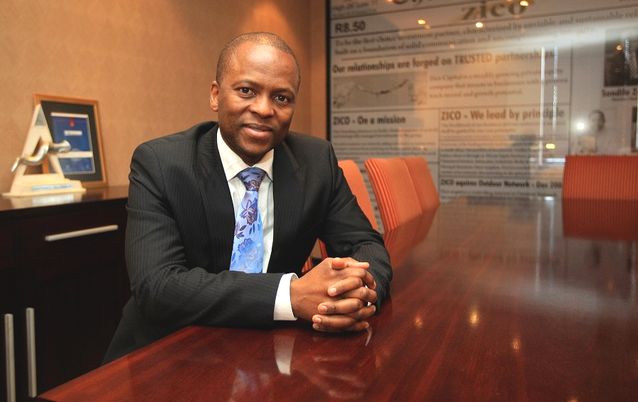 Sandile Zungu, president of the Black Business Council, was saddened to see that his lobbying for black businesses to benefit from the process has been hijacked.
Image: SUNDAY TIMES

Anti-corruption investigators are probing a sickening slew of allegations that unscrupulous officials and businesses benefited from billions meant to fight Covid-19.

Deals believed to be worth more than R2.2bn, involving emergency purchases of personal protective equipment (PPE), are at the centre of what one business leader described as a "heart-wrenching, unscrupulous and filthy" feeding frenzy.

Sandile Zungu, president of the Black Business Council, said he was saddened to see that his lobbying for black businesses to benefit from the process has been hijacked.

"We now have to put it on record that these are not black businesses, but thieves," said Zungu.

The Special Investigating Unit (SIU) is investigating 90 companies that received contracts from the Gauteng health department. It is also investigating R30m worth of allegedly irregular contracts in KwaZulu-Natal, as well as others in the Eastern Cape.

The big cleanup is taking place ahead of a decision tomorrow by the International Monetary Fund board to approve a R70bn loan to SA to help fight Covid-19.

One industry insider said it was "disheartening" that legitimate companies were overlooked in favour of the start-ups that had benefited.

"Most of these companies are connected with people in power or positions within health departments that are authorised to sign off orders," said the man, who declined to be named.

"You see that companies with core business in IT, plumbing, construction, stationery etcetera are getting medical goods supply orders."

Gauteng government spokesperson Thabo Masebe said the contracts were flagged by the Gauteng Audit Service, based at the provincial treasury, which referred them to the forensic service in the office of the premier. The premier's office called in the SIU to investigate.

Masebe said the department used the disaster regulations to appoint service providers, allowing them to deviate from strict tender processes. Officials from the Gauteng Audit Service identified problems with contracts whose values ran into many millions of rands.

They questioned the amounts paid and whether the process was fair, he said.

There was no 'tender bonanza', says Ramaphosa's spokesperson on R125m contract for her husband

Presidency spokesperson Khusela Diko has come out in defence of her husband, whose company allegedly received a R125m tender to supply personal ...
Politics
10 months ago

SIU spokesperson Kaizer Kganyago said: "Our team has been there [at the Gauteng treasury] for a week or more. They have already established that there are 90 companies that they are investigating ... just for the health department in relation to PPEs only. If one of them is to the value of R125m and there are 90 of them, it's a lot of money.

"We're looking at procurement in the main and adherence to the regulations from treasury. And those regulations were specific on issues of price. There was a clear regulation and framework put out by the National Treasury. We're looking at whether people are adhering to those, among other things."

An incomplete list of 52 tenders worth nearly R2.2bn said to have been awarded by the Gauteng health department to fewer than 40 companies - some of which are owned by politically connected individuals - has been circulating on social media. The Gauteng health department would not confirm the list, but businesspeople whose companies are on the list confirmed to the Sunday Times that they had done business with the department.

There is no indication that companies on that list were involved in any wrongdoing, but a senior Hawks official close to the new "Fusion Hub" of investigators - which consists of law enforcement officials from various organisations and which was announced by President Cyril Ramaphosa on Thursday - said they had received the list of all Covid-19 tenders awarded by Gauteng and were investigating all the contracts.

One of the companies on the leaked list is Royal Bhaca, owned by Bhaca King Thandisizwe Diko, husband of presidency spokesperson Khusela Diko. The Sunday Independent reported last week that his company Royal Bhaca was awarded two contracts worth a combined R125m.

The amounts are reflected on the leaked list. He said the contracts never went ahead even though he did the work. Khusela Diko, who has a close relationship with health MEC Bandile Masuku's family, said at the time she had advised her husband against doing any business with the provincial government.

The leaked list features the names of others with political connections.

One of these is Sicelo Buthelezi, once an adviser to former health MEC Qedani Mahlangu, and a former chair of the ANC's Sandton branch. According to the list, Buthelezi's company, HSB Mercantile, of which he is the sole director, received three contracts totalling more than R873m. 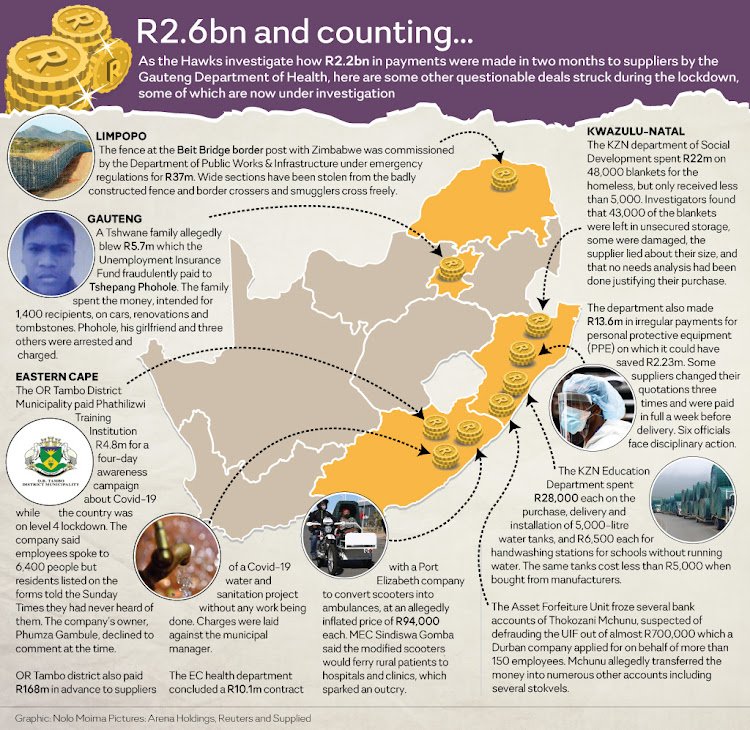 A list of questionable deals struck during lockdown, some of which are now being probed.
Image: Nolo Moima

Buthelezi told the Sunday Times there was no conflict of interest because he had not worked for the department since 2012.

Asked whether or not he had been paid, he would only say: "Certainly the relationship is ongoing but I cannot divulge without client approval any details concerning my company's role as a service provider to them."

Former ANC activist and businessman Thabiso Lekoana also features on the list, which states that his company, LNG Scientific, won R113m in contracts. Lekoana confirmed doing business with the department, but declined to comment further.

Ntsikelelo Khatyana, chief operating officer of record label Mabala Noise, owned by former ANC Youth League treasurer-general Reggie Nkabinde, is on the list. His company, Olwe2 Project Management Consultancy, got a R17m contract, according to the list. Khatyana did not respond to questions.

Maponya Medical Solutions, a company of which Chichi Maponya, the daughter of the late pioneering Soweto businessman Richard Maponya, is one of three directors, was, according to the list, awarded three tenders worth a combined R267m between March 30 and April 3. She did not respond to questions sent on Friday.

Masebe said the SIU had interviewed provincial health officials, including former chief financial officer Kabelo Lehloenya, who resigned at the end of May. Lehloenya was not available for comment yesterday.

The whole thing seems so unscrupulous and filthy, one doubts it will ever meet the National Treasury-issued regulations pertaining to emergency procurement of supplies and services

Masuku's spokesperson, Kwara Kekana, would not release a list of companies that have won department tenders and would not comment further "to avoid interference with the ongoing investigation".

Meanwhile, Zungu said: "The whole thing seems so unscrupulous and filthy, one doubts it will ever meet the National Treasury-issued regulations pertaining to emergency procurement of supplies and services.

"Thieves and parasitic covidpreneurs who masquerade as black businesses must be handcuffed and shackled to their prison cells. They rob authentic, hard-working and ethical black businesses of an opportunity to do legitimate business with the state.

"South Africa is becoming a nation of thieves, with the most unscrupulous enablers in official positions all too ready to feast on the relief meant for the most vulnerable in our society."

Kganyago said the SIU investigation would soon move to the Eastern Cape, where it will probe a R4.8m contract awarded by the OR Tambo municipality for a Covid awareness campaign.

He said it would also head to KwaZulu-Natal, where premier Sihle Zikalala this week announced the provincial government has uncovered irregularities in the awarding of two tenders to supply blankets for the homeless and PPE worth a combined R30m.

In the Western Cape, Kganyago said, it will investigate allegations emanating from the Matzikama local municipality on irregularities regarding a PPE tender.

The auditor-general's spokesperson, Africa Boso, said it is conducting an audit of all Covid-19 government expenditure.

Investigations into the awarding of tenders to supply blankets and PPE have uncovered irregularities by the provincial department of social ...
Politics
10 months ago

Gauteng premier David Makhura has made a full recovery from Covid-19, his office said on Thursday.
Politics
10 months ago