Emmanuel Sithole: Chronicle of a killing in cold blood 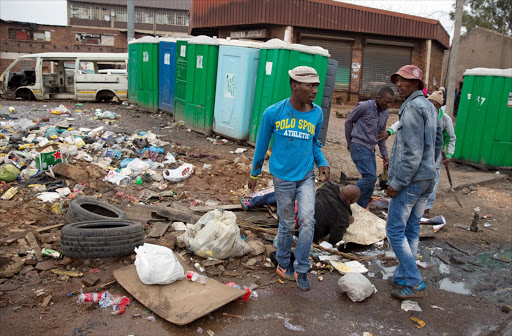 Mthintho Bhengu (who would be convicted of murder), Sfundo Mzimela (guilty of murder) and Sizwe Mngomezulu (who would be released by the court) leave a beaten and battered Emmanuel Sithole on the ground. This picture was taken before another young man, who is a minor and thus cannot be identified, came running with a large knife.
Image: JAMES OATWAY

His pictures of the gruesome murder of Mozambican Emmanuel Sithole in Alexandra this year won him a major award. But as photographer James Oatway relates, the experience exacted a heavy price on his own wellbeing.

I had not slept well on Friday night. The prospect of a return to the horrors I had witnessed during the xenophobic violence in 2008 filled me with unease. Drunken neighbours coming home from a party woke me at around 2am. I finally got up before 5am on April 18 2015 - it was still dark. I showered and went downstairs to wait for reporter Beauregard Tromp.

We arrived in Alex and made our way towards the hostels. There was a lot of debris all over the roads. Many of the permanent portable toilets had been pushed over. We slowly worked our plain white VW Polo through the smouldering barricades on London Road. I saw a man with a golf club and some youngsters with sticks disappearing into the shacks.

We decided to inspect the looting more closely and speak to locals. We stopped at a small tuck shop. Women in fluffy pink dressing gowns and slippers, with their heads covered, stood outside chatting quietly.

The zinc roof had been peeled off and the front wall smashed. The owner, a South African man who had rented the shop to a foreigner, was upset. I took a few photographs before moving down the road to another looted shop.

This shop's roof had been peeled back, too. Most of the goods had been taken. The floor was a mess with spiltsoft drinks and other detritus. A middle-aged man was inspecting the scene. Presently an elderly woman emerged. I took some pictures. In the street I photographed some kids who were picking up loose sweets scattered among the debris near an overturned blue plastic toilet.

Then I heard screams and the shouting of angry men. I looked up and I saw men running zigzag in my direction. A man was being chased. He fell to the ground and the first attacker began to hit him with a big spanner. I ran towards them, taking photographs. There were others shouting and the attacker briefly moved away. That's when number two came running in. I noticed he had a knife in his hand. Through the viewfinder of my camera I saw him raise his arm high above his head and stab at the man.

He feigned a strike to pre-empt the man's attempt to block the knife then plunged in fully for the strike. The men scuffled and both ended up on the ground. Then the first attacker reappeared, swinging his spanner. There were other men present now - some were discouraging the attackers, who had become aware of my presence. I kept getting closer, photographing all the time. We were only metres apart. Then the attackers withdrew. They came very close, some glaring at me. I thought that I was in trouble, but they kept walking straight past me.

Out of nowhere a third man came sprinting in and landed a flying kick on the victim, who was sitting stunned on the ground. I noticed a large kitchen knife in his hand. Another man intervened and the attacker jogged off to join his comrades who were lingering at a distance.

The victim sat there staring at me. I shouted at him to get the hell out of there, but he just looked at me as though he didn't understand what I was saying. I was afraid the attackers would return. They were half-walking, half-jogging down the street.

"Let's go! Let's go!" I shouted, looking between him and the attackers. Finally he got up and started to walk away. "Are you OK?" I asked. No response. He looked back in the direction of the attackers. "What's your name?" He struggled to say something but I couldn't work it out. He kept looking over his shoulder. He seemed angry.

Tromp appeared and I went to try to find out what exactly I had just witnessed.

I approached a tall young guy. The first thing he said to me was that the victim was Mozambican. We were discussing the incident when someone shouted that the man had just "fallen down". I ran up the road and saw him right at the top. I called to Tromp to bring the car and then ran to the man. At first it looked like his face was creased in a smile, but it was a grimace. Instinctively I shot some pics.

I spoke to the man. "Don't worry, you're going to be OK. Just relax. You're going to be fine." Tromp arrived with the car and I tried to get the man in. He kept making a sound like "heeeyeeee, heeeyeeee". He was extremely heavy. My cameras kept getting in the way, so I threw them into the front of the car. I remember him smelling strongly of beer. His clothes seemed to be soaked with it. I remember his big, strong hands. I remember some scuffs on his hands and some blood. A stab wound to his chest.

A young woman told us that there was a clinic just up the road. It was only a few hundred metres away. I stormed in calling for help. A bunch of patients sat around. We struggled to get the man into a wheelchair. He was so heavy.

"There is no doctor here. You must take him to Edenvale Hospital," a nurse said.

They took his shirt off and put a dressing on his chest wound. We battled to put him into the car again.

The journey to Edenvale was excruciating. There were slow vehicles, taxis turning and narrow bendy roads that made overtaking very dangerous. The man was struggling and kicking around in the back of the car. I turned in my seat and tried to calm him. I kept telling him: "Don't worry. Just relax."

He looked at me now and then - surprise on his face. He calmed down a bit. I kept talking to him - now he was slipping in and out of consciousness. I still didn't think that he had sustained fatal wounds. I had seen people with worse wounds survive. Then his chest wound started to bleed through the dressing.

We finally reached the dull grey edifice that is Edenvale Hospital. It looked depressing in the overcast light. A security guard asked us to take a seat in the waiting room. There was a corpse covered in a grey blanket lying on a gurney. Not a very big corpse - either a child or an old person, I thought to myself. There weren't many people around.

In a heightened emotional state I found it difficult to remain seated. I looked through a gap in the door and I could see the medics doing CPR on the man. I went in and out of the waiting room many times for what felt like a long time.

A nurse came out and called me over. I went into the theatre and saw the man lying on his back. The nurses and the doctor stood and looked at me. "Is he dead?" I asked. "I'm sorry. We tried, but the knife had gone straight into his heart. Anyway, his pupils were fixed when he came in."

I noticed they had stitched the wound on his chest. His neon takkies had been taken off. I saw his Bafana Bafana bangles. His thumbnail cut too short. The nurses went through some numbers on his phone and a senior nurse made a call from the phone. After hanging up she said: "His name is Emmanuel Sithole."

Back in the newsroom I hung around aimlessly even though I had been told I could go home. Some of the pictures were out of focus. Some had motion blur. An untidy set of images from an unexpected trauma . I looked at my clothes. Sithole's blood was on my jeans and my shirt. I finally went home and put on some music: Abdullah Ibrahim - a Best Of compilation. I shaved my beard and my head and then I got into the bath where I rested for a while.

"Sorry excuse for a human being." "You disgust me. I hope someone photographs your death." "You may as well have killed him yourself."

Some messages made me feel very good. Legendary South African photographer David Goldblatt e-mailed me: "Terrible, terrifying, brave photographs by you in today's Sunday Times." Another legend, João Silva, sent me a supportive message ending with "Hero in my eyes".

Many people have asked me: "Are you OK?"

Well, I don't think I am, but I think I will be. I seem to have lost my joy. I can no longer laugh without limits. I drink too much alcohol. I struggle to appreciate beauty ... I have to force myself. I sometimes feel very lonely, even around my wonderfully supportive and loving family. I've been very moody and bad-tempered. Dark gloomy moods.

People don't really know what to say to me. Many have said "Well done!" Journalists I meet mention the awards I should win. Some people have said: "Nice pictures." Strangers have approached me and said simply: "Thank you for what you did."

But Emmanuel Sithole is not coming back. I will remember his death for the rest of my life.

• Oatway and Tromp won the 2015 Vodacom journalist of the year award for their coverage of the killing of Sithole, who was also known as Emmanuel Josias

The horrific murder of Sithole shocked Sunday Times readers - and they opened their hearts and wallets to help his family.

After publishing shocking images of the attack in Alexandra, the Sunday Times was inundated with offers of help from readers, some as far afield as London.

We can report that our fund raised R111, 000. Generous readers gave whatever they could, with amounts ranging from R28 to R5000.

Some of the money has already been used to deliver food and other supplies to the family Sithole left behind in Nhachunga in northern Mozambique.

The Sunday Times worked with Mozambique's Foundation for Community Development, which delivered food, clothes, household goods, a bicycle and a water tank, the family's most pressing needs.

There is still R87, 962 left in the readers' fund for the family's additional needs.

The foundation said Sithole's family had thanked Sunday Times readers for their generosity.

The banking details for the fund are as follows: