The Bok No 9 touched all of us, writes Liam del Carme 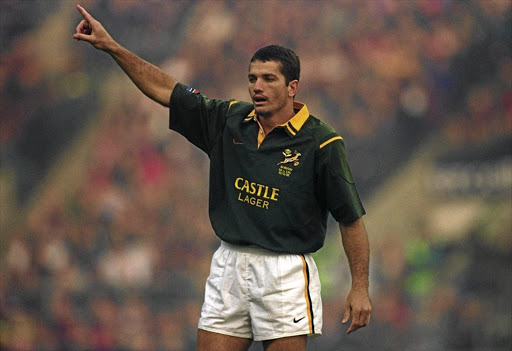 Joost was loved by the South African public, even amidst headline storms.
Image: GETTY IMAGES

In the opening paragraphs of his quite magnificent The Death of Ayrton Senna, journalist Richard Williams describes how the charter jet returning the remains of the Brazilian icon burst through the clouds on final approach into gloomy São Paulo in May 1994.

A few days earlier, the three-time Formula One champion had died after crashing his car in the San Marino Grand Prix. Now, as if a temporary gift from the gods, his body was descending to his adoring fans.

Like Senna, he was on friendly terms with the sporting gods, was prone to bouts of brooding and shared an unremitting quest for excellence.

It meant they occasionally blurred the lines between being competitively consumed and seeking competitive advantage. They drove and played on the edge.

For Senna, the road to sporting glory was paved from the moment he set foot in his first go-kart. His wealthy parents put their driven child first.

Van der Westhuizen's path was chequered in a different way.

"He may not have been the best in terms of technique but as a rugby player there weren't many better than him," said Van der Westhuizen's long-time understudy at the Springboks, Werner Swanepoel.

"He had to turn to his right to kick," noted Gysie Pienaar, the Springbok backline coach during the 1995 World Cup.

"The game wasn't created for him," said Botha. "It wasn't created for left-footed scrumhalves. To kick with his left foot he'd turn into the defenders. When he kicked with his right foot it often went out on the full, but he worked at it and it improved. It forced him to look at other options and that's why he became so adept at breaking around the fringes," said Botha.

Of course being "flawed" and "floored" are different concepts and it speaks to the core of Van der Westhuizen that when he seemingly went to ground he'd bounce back up. In his pomp some observers often referred to it as a Lazarus-like quality - defenders had him in their clutches only to see him speed off like a getaway car when they relaxed their grip.

He was a redoubtable opponent, an adversary who wouldn't, maybe even couldn't, stand down.

Van der Westhuizen pushed the physical limits, placing his body in the path of peril as Jonah Lomu discovered, to the All Black wing's chagrin, in the Rugby World Cup final of 1995.

Even when the 89-test veteran was injured, it was duty before pain.

"He played through those injuries," said Swanepoel, who played in Van der Westhuizen's considerable shadow for four seasons.

"I'm miffed with him for playing through those injuries ... I could have played more," quipped Swanepoel, who played only 20 tests out of a possible 42 between his first and his last.

Swanepoel, however, was just pleased to be part of something special.

"It was incredible. To have joined some of those players who had won the World Cup and to be part of the group that won 17 [tests] in a row.

"Joost lived for the Springboks and the Bulls. He had a strong head. He could turn a game on his own. Only Joost could see those gaps, and made it seem easy."

Swanepoel had not planned to attend Van der Westhuizen's memorial on Friday. Observing his friend and adversary's physical decline hit him hard.

"I know his parents well, and his brother. Our kids are at the same school. I've passed on my condolences.

"The first time I went to a function after Joost fell ill, it caught me," Swanepoel said.

"I could only stay for half the function. When I got home my wife asked: 'What's wrong with you?'

"I told her I didn't think seeing Joost like that would affect me so much. For four years at the Boks, Joost and I would be next to each other at training and go at it as hard as we could. We could grab each other by the collar. It was hard to see that energy was no longer there ... with him being in a wheelchair.

"That was very difficult to see, but we will remember him as a fighter," said Swanepoel.

He certainly got around. He was a guest of the then ambassador to Argentina, Tony Leon, at a business gathering in Mendoza on the eve of the Springboks' inaugural away test against Argentina in the Rugby Championship.

Like Swanepoel, the locals' memory of Van der Westhuizen did not match what they were seeing. His body had withered and his speech was laboured. The hugs were heartfelt, the tears poorly concealed.

"At the functions he could hardly speak. Yet he was there and tried to speak. Others at times spoke on his behalf. Yet he remained in high spirits."

Pienaar said he found Van der Westhuizen's perpetually cheerily upbeat demeanour his most endearing quality. That's not how all experienced it, but maybe it is different for journalists. He vacillated between warm and cold like a tropical storm. Aloof as if on one of his customary blindside breaks one day, warm and courteous the next.

In retirement, he was inclined to humility and humanity.

There was no doubt at the final whistle that he had left it all behind. He dealt in the kind of white-knuckle currency sports fans hold dear and it perhaps explains why he was admired and adored regardless of the headlines.

Yes, he was flawed but he was ours. One of us.

Van der Westhuizen was full throttle and in that we thrilled. Yet we knew he was fallible and we also knew that when you go about your business at breakneck speed something has to give.

Provincial allegiances aside, he was blue collar and blue blood in equal measure.

One of his former teammates referred to him as "untouchable". It spoke of his on-field talent and his celebrity off it.

His life was haunted by paradox. While studying, he worked night shifts as a security guard in Pretoria. Years later he clashed with security guards at the entrance to the boomed-off estate where he lived.

There were other controversies. Images of a man bearing his likeness in a sex video brought him in direct conflict with a gossip magazine. He pleaded his innocence; the images were grainy, hence no amicable resolution.

Like Senna, however, Van der Westhuizen was widely revered and adored. As we've seen since his death, South Africans, too, exercise their proprietorial rights over their sport stars.

Van der Westhuizen, too, will leave us with the heart-warming conviction that where talent stops ambition starts.

Some will choose to cling to his less illuminated pursuits.