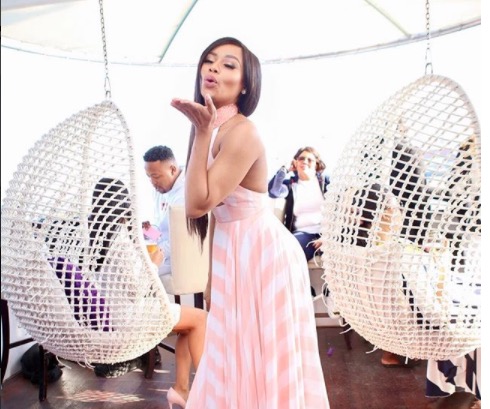 Bonang Matheba's rise to stardom and journey to becoming a formidable force in the entertainment industry has not been a walk in the park.

Speaking at the swanky launch party of her book, Bonang: From A To B on Thursday night, the Top Billing presenter spoke about how she dealt with betrayal over the past 13 years in her professional and personal life.

Bonang also shared how to deal with heartbreak and betrayal, no matter the situation.

"Accept it. Feel it. Embrace it. Cry the tears and feel the pain, know how it feels so you never have to go back there. Once you have felt it, move forward," she said.

Bonang said she chose to rather learn from the experience, take the good out of it and move forward.

She said that there were some people who would rather choose to let such situations consume them and therefore would not move on.

Bonang's book has been a major talking point among fans over the past two weeks.

A chapter from the book where Bonang revisited being in an alleged abusive relationship went viral last week. She also revealed that she cut Somizi out of her life because he apparently became friends with her ex-boyfriend.

The memoir also got major backlash on social media for being poorly edited and filled with 'grammatical errors.

DJ Euphonik has responded to the offer by entertainer Skolopad to help him "get over Bonang" after his "home wrecker" tweets on Wednesday went ...
TshisaLIVE
4 years ago

Just hours before friends, family and fans gathered at the ultra-posh Diamond Walk in Sandton City to celebrate the launch of Bonang's book, Bonang: ...
TshisaLIVE
4 years ago