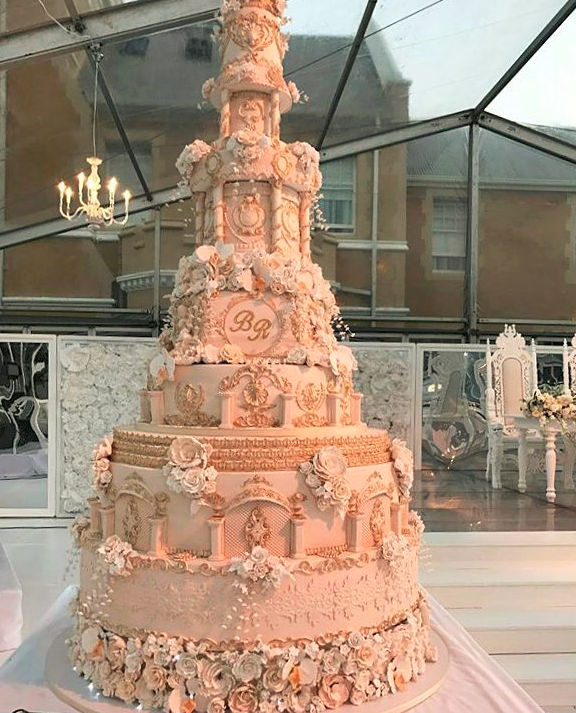 Reggie and Beauty's regal cake stole the spotlight at their wedding.
Image: Via Facebook

ANCYL treasurer-general and Mabala Noise boss Reggie Nkabinde and his childhood sweetheart, Beauty Matela pulled out all the stops for their lavish wedding ceremony over the weekend, which included forking out over an estimated amount of R60,000 to have the cake of their dreams made.

Reggie and Beauty's two-day wedding celebrations took place on the South Coast of KwaZulu-Natal and was nothing short of a fairytale affair.

However, it was not the celebrity guest list or the designer clothing that left guests in awe - it was the three metre, 100kg, pearl-finish ivory 'castle-themed' cake that stole the spotlight.

Speaking to TshisaLIVE, Sasha Naidoo owner of Sugar Coated Cakes, the company that created and made the bride's dream a reality, said it took her over a month to make the cake, to ensure every detail was perfect.

"Beauty came to us with a picture that showed the vision she had for the cake. It had a lot of interesting elements, which we were going to elaborate on. The architectural structure in that picture was similar to a castle, it had gold elements that made it elegant and flowers that completed her vision of the beautiful cake," Sasha said.

It is estimated that a cake like this can cost between R60,000 and R100,000 to make but Sasha would not be drawn into revealing the exact amount.

The cake was also covered in pearls and over 2,000 sugar flowers, including hand-made roses, peonies, orchids, hydrangeas and small daisies, which Sasha said took over three weeks to make.

"Beauty wanted a 'statement cake' and when I showed her the samples of the flowers, she loved them and coincidentally they matched the flowers on her table centre pieces. So although I spent a lot of time on the details of the cake, we knew they would complete the look," she said.

Four tiers of the cake were real traditional fruit cake while the bottom two tiers were artificial.

This is not a cake, it's a castle @govner_reggie congratulations Mr & Mrs Khawula #whatatimetobealive

WATCH: Vatiswa Ndara reflects on the tough times that made her a tough woman

Award-winning actress Vatiswa Ndara's journey to the top definitely wasn't a walk in the park, and was filled with huge speed bumps along the way. ...
TshisaLIVE
4 years ago

Khanya Mkangisa gets into gear for next Tropika Island of Treasure

Actress Khanya Mkangisa is the first celebrity to be announced as a contestant for season eight of reality show Tropika Island of Treasure, which ...
TshisaLIVE
4 years ago

Fulu Mugovhani's theatre troubles: 'I just can't seem to get any roles'

Fulu Mugovhani may have burst into the spotlight with a theatre role as Nala in The Lion King but the star said that it has proven more difficult to ...
TshisaLIVE
4 years ago

These snaps of Kelly Khumalo are so hot they may give you sun stroke.
TshisaLIVE
4 years ago